How an African lake transforms unlucky wildlife into petrified statues 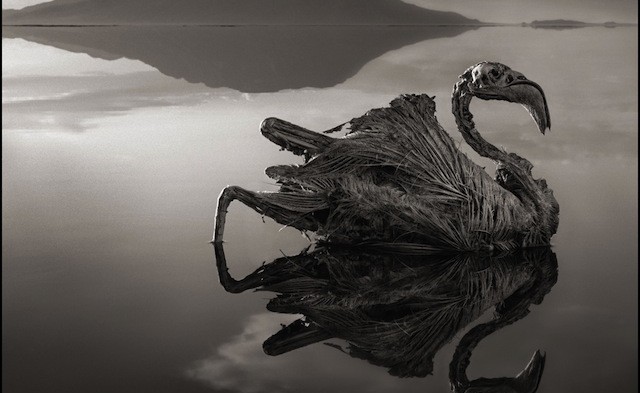 Northern Tanzania’s Lake Natron has more in common with post-apocalyptic fiction than it does with the rest of the region’s peaceful mountains. The shallow lake retains an average pH as alkaline as ammonia, and temperatures can sometimes rise as high as 140 degrees. And although salt-loving microorganisms bloom in the lake, tinting sections a dense, violent shade of red, the waters are so hostile the lake is void of many of the types of plants and animals teeming around it. Unless, that is, you count the mummies.

When wildlife in the region die, there’s a good chance the bodies will fall into the vast lake and drift ashore. But rather than decay, the lifeless carcasses are transformed by Lake Natron’s unusual properties into calcified, statuesque figures — pale and hardened like desert rock. The phenomenon has received a lot of attention lately thanks to photographer Nick Brandt, whose latest book, Across the Ravaged Land, shows the result of this eerie ecological spectacle.

The animals are calcified because a mixture of salt and minerals called natron, which completely dries out dead matter while simultaneously preserving it from bacterial decay. Natron, for which the lake is named after, flows from the surrounding hillsides, and collects in high proportions as rapid evaporation rates reduce the waters into a rich slurry. Ancient Egyptians used natron extensively for their mummification rituals.

“There are very few species that can live there,” said David Harper, a freshwater science researcher at the University of Leicester. “But those that do live in enormous densities because there is no competition.” Nearly 2.5 million lesser flamingoes use Lake Natron as an exclusive breeding ground.  A few species of alkaline tilapia are endemic to the waters, too. For these organisms, the lake is a perfect barrier against predators.

Evolution has been kind to these animals, which have adapted well enough to withstand the harsh waters. “Lesser flamingoes have leathery skin on their legs, as feathers would be useless soaked with water,” explained Harper. “The skin prevents damage by the caustic water, but birds that have cuts or other injuries can quickly become incapacitated and then fall victim to predators like eagles.”  The tilapias that swim in the lake have evolved with similar characteristics to withstand the alkalinity and high temperatures.

Harper also clarified that while other wildlife unlucky enough to stumble into the lake are certainly not safe, they do not instantly die and become calcified as has been sometimes misreported.

While the water itself is non-toxic to at least a few organisms, human interference in the region could cause an environmental havoc that no type of adaptations could defend against. The “near-threatened” lesser flamingoes, in particular, could be permanently forced out by proposed industrial developments and uncontrolled tourism. Brandt’s photographs are meant to portray the artistic dimension of the natural world, but they also serve as a disturbing vision of Lake Natron’s future if human development goes unchecked.

Neel Patel currently holds B.S. in biology from Virginia Tech. Writing has always been his fiercest passion in life, and it was during a brief stint working in an immunology lab that he decided to pursue science writing. Before being accepted to SHERP, he worked as an editorial intern for The American Horticultural Society. His biggest scientific expertise is in human disease and pathology, but there is no topic or issue he wouldn’t write about. His other interests include metaphysics, pop culture, and everything in between. You can follow him on twitter at @n_vpatel.