Here’s what science says about your alleged look-alike 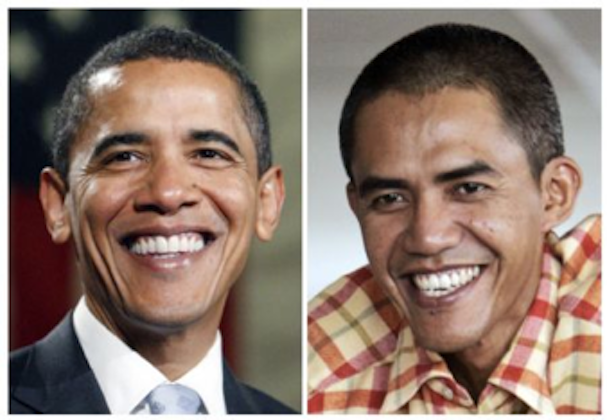 Reading faces. This photo of the president and a man who closely resembles him is pretty convincing to some but the president might disagree because we each perceive faces differently, especially our own. [Image credit: Reuters]

Are you a super seer?

How many times do people say, oh, you look like that actress and you think, that doesn’t look like me at all? Wouldn’t it be nice to think one of the world’s most attractive people was your doppelgänger?

“People tell me I look like Tom Cruise and all I can say is, yeah I wish!” says Daniele Podini, a forensic scientist and expert in facial recognition at George Washington University in Washington D.C. Podini isn’t convinced that true doppelgängers exist, but he acknowledges that statistically it is possible. He says that based on the number of humans, and the fact that our genes combine randomly, it is likely that a few of us look similar. He points out that even so, there is a bias in claiming that someone looks exactly like someone else, because our perception is “filtered by our own experiences.”

Here’s what actually happens when your brain recognizes someone: It becomes a small, squishy computer programmer and every aspect of a person’s face represents a code. This system of face recognition would be an efficient way of telling one human from another, except for one glitch, explains Podini. You might read someone’s face in the order: eyes, mouth, nose. The size and placement of her eyes dictate the way you see the rest of her face. Another person might interpret these features in the order: nose, mouth, eyes. The brain gets the same signals, but the scrambled order places emphasis on the nose instead and adjusts the perception of the rest of the face. In this way, we all see each other differently, making the credibility of doppelgängers a bit suspect.

Studies into unrelated look-alikes paint a blurry picture, but researchers know that genes play the most important role for one simple reason: identical twins look more alike than fraternal ones, and siblings often look more alike than strangers. This means genes are at the helm of the processes that shape our face.

Looking for proof in patterns, an international team of researchers examined more than 15,000 faces, all of European ancestry. By taking measurements such as eye-width and distance from the nose and mouth they were able to group the similar looking participants objectively. Then, they compared the genes between the groups. The group uncovered five distinct genes that build the face and reported their work in Plos Genetics. The researchers weren’t concerned whether doppelgängers actually exist; they were more interested in setting the groundwork for a foolproof and consistent way to determine what a face looks like. By discovering more of these genes, researchers could one day build a tool that helps forensic scientists, like Daniele Podini, rebuild a face from a single piece of DNA.

“It’s almost science fiction but it is something that is theoretically possible,” says Podini. He says that although this kind of technology would be ideal, there are other factors to consider. “I saw a picture of identical twins, one of which was a smoker, and they looked completely different.” Podini thinks uncovering the genes alone is not enough because our behavior and lifestyle also alters the way we look. This means that a technology that uses DNA to build a corresponding face would require a lot of genetic material—enough to help the scientist to include data about behavior—something which often isn’t left at a crime scene.

A geneticist at Berkeley National Lab, Axel Visel has another factor to add into the do-doppelgängers roam-the-earth question: gene enhancers.  These are sequences in our DNA that act like switches to turn our genes on and off. Small differences in the “exact sequence” of these enhancers can change the way they work from person to person.

Visel admits that it is “tempting” to conclude that these enhancers, when expressed in certain combinations, are responsible for why even people who are unrelated can sometimes look alike. He cautions that right now there is no evidence to support this idea. But he and his team are working on it.

Being mistaken for someone’s doppelgänger might even be as simple as heading into a salon or barbershop one day and walking out with a new style.“A different hair color, or even just a haircut, means havingour facial recognition system update itself to accommodate these variations, and this can be challenging,” says Marlene Behrman, a neuroscientist at Carnegie Mellon who studies prosopagnosia.

Also known as face-blindness, prosopagnosia prevents some people from differentiating between faces. It’s linked to damage in a region of the brain referred to as the fusiform gyrus that helps us make out faces. “It’s like having dyslexia, but for faces,” she adds. The disorder affects people who have had a part of their brain damaged, but can also present itselfwithout any brain injuries.

Stumbling upon someone who appears to be the spitting image of your childhood best friend might be an exciting experience, but identifying faces is an evolutionary advantage meant to protect us. “You would think recognizing faces, something so critical to distinguishing friend from foe, would be very fine-tuned but it’s actually very hard for us,” says Behrmann. Our trouble with pinning down a face, says Behrmann, is a compelling argument for why the existence of doppelgängers may have to remain a myth.

wrote on August 28th, 2012 at 11:39 amMichelle 0 Thank You for sharing your story! Super instieterng and educational. I also suffer from epilepsy. It always helps to see how others cope and also to see epilepsy through their eyes, as I feel it definitely effects us all so differently. I have 2 questions if you don’t mind answering. I will totally understand if you rather not. My first question is : Is their different degrees of you condition? And my second question is: Besides epilepsy, do you have any other diagnosed health issues?, other than what the stroke caused? As in any Autoimmune issues? . Once again, Thank You for sharing your story.