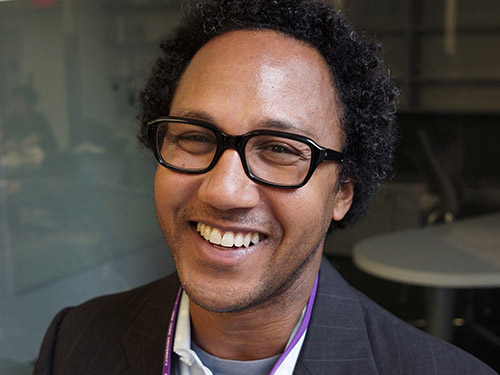 John, Madeleine and the Tadros

A series of experiments conducted in the late 1950s showed brain activity when a frog was presented with a moving black dot, like a flying insect, but no activity when that black dot was standing still. The conclusion? For frogs, a motionless fly simply does not exist.

André Fenton, a professor of neuroscience at New York University, first learned about this study in the late 1980s, in an early-morning biology class given by Ron Chase of McGill University in Montréal — normally he wouldn’t show up for morning lectures, he admits, “…but I happened to go, and this changed my life.”

Ever since Fenton, now 46, was a teenager, he has asked the question, “What is real?” He has spent his entire career trying to answer it. “We are having a conversation now,” he says. “Am I making this up, am I hallucinating it? What do I actually understand from our exchange right now?” While philosophers have tried to tackle such fundamental issues, not many scientists have. “It seems everyone should!” Fenton says, with a boyish smile.

His curiosity is contagious, and it has made him a committed neurobiologist. His New York University research team works on memory formation and retention using the mouse as a model organism. “We would like to understand the rules by which experience impacts the brain,” he says. Their behavioral studies provide clues about how mice interact with their environments. Little electrodes implanted in the mouse’s skull measure the firing of single cells in their brains, and molecular readouts allow the researchers to understand neuron function in stunning detail. “I am not a master of any tool, but I know how to use many tools,” says Fenton.

From the moment he learned about the frog’s eye experiment, Fenton had found his big question and was ready to pursue it anywhere in the world.  He turned to his mentor, Chase, for advice. “This guy was full of confidence and self assurance and adventurism,” Chase says. Fenton sent letters to various laboratories on the other side of the Atlantic, to Slovenia, Spain, Russia and the Czech Republic. When Jan Bures’ — famous for his system level approach to animal cognition — invited him to join his research group in Prague, Fenton jumped at the chance.

During his 18-month stay in Prague, Fenton wanted to study how memory persists in mice. To approach this on a behavioral level, Fenton invented the “rotating arena” — a mouse-scale platform, which deprives the animal of all its outer senses: hearing, sight and, importantly, smell. This way he was able to quantify the capacity of location memory in the mouse, giving the animal no way to cheat with its sensitive nose and other senses. This was a novel tool for the neuroscience community.

In 1992, Fenton returned to the United States for his doctoral research. He worked with Robert Muller at the State University of New York (SUNY) in Brooklyn, looking at a specific type of neuron that plays a key role in memorizing location: so-called “place field” neurons. The connection to his science peers in Europe, however, remained, and while finishing up his Ph.D. thesis in the U.S. he started to set up his own research group in Prague under the guidance of Bures.

Moving back to the Czech Republic in 1997, Fenton had many ideas, but not much funding. An increasing number of researchers were using his rotating arena, and he received requests for help with the tool and the software he had developed to go with it. At the time, he regularly played squash with a friend, Sasha Borovik, and often complained about the time-consuming support he had to give to other laboratories. Fenton recalls that Sasha, a lawyer by training, said, “Dude, this is what a company is for!” — and in 2002 they founded a startup now known as BioSignal Group.

To measure neuronal signals in the mouse brain while it was racing around a rotating arena, Fenton developed tiny electrodes that wirelessly transmit electrical signals. BioSignal Group took this concept one step further, by miniaturizing electroencephalograms (EEG), normally bulky machines, to analyze brain activity in humans. After recent clinical trials in New York, Fenton and Borovik’s microEEG got approved by the FDA and aims to serve emergency units in hospitals for checking brain function in patients, “just as you would check the blood pressure,” Borovik says. Because of its portability the microEEG is already being used in a hospital in Malawi, where malaria patients receive regular diagnostic brain scans to prevent unexpected seizures. The raw data is transmitted online to neurologists in the U.S., who provide the diagnosis for free. “There is probably a child in Malawi today who got an EEG,” Fenton says. “We are quite proud of this.”

Fenton received an offer to serve as assistant professor at SUNY Downstate Medical Center in Brooklyn, and commuted between the Czech Republic and the U.S. for three years until returning permanently to New York in 2003. Fenton’s ability to head two laboratories on different continents simultaneously speaks volumes about his organizational skills and leadership ability, Bures writes in his book, “The History of Neuroscience in Autobiography.” Bures goes on to describe Fenton as a pioneering example of the Czech Academy of Science opening up to foreign excellence. “He came to Prague as a researcher and left as an accomplished scientist,” Fenton’s friend Borovik remembers.

Soon after his return to the U.S., Fenton and a colleague, neurologist Todd Sacktor, made a major discovery, describing the role of a specific protein, PKMzeta, in long-term memory formation — a discovery recognized within the “Breakthroughs of the year” by the journal Science in 2006.

In 2008, NYU offered Fenton a position as principal investigator, which he accepted, under the condition that he would be permitted to maintain a working relationship with his students at SUNY. In addition to supervising students in Manhattan and Brooklyn, Fenton also allocates part of his time to consult for his growing startup. It seems that his energy is without limit.

According to Sacktor, however, Fenton’s greatest strength is not his energy but his optimism. As long as “what is real?” remains unanswered, André Fenton will continue asking questions. “He doesn’t get discouraged,” says Sacktor. “He always sees the glass half full — that’s wonderful!”