Are tree waters environmentally sustainable, good for your health, or just simply delicious? 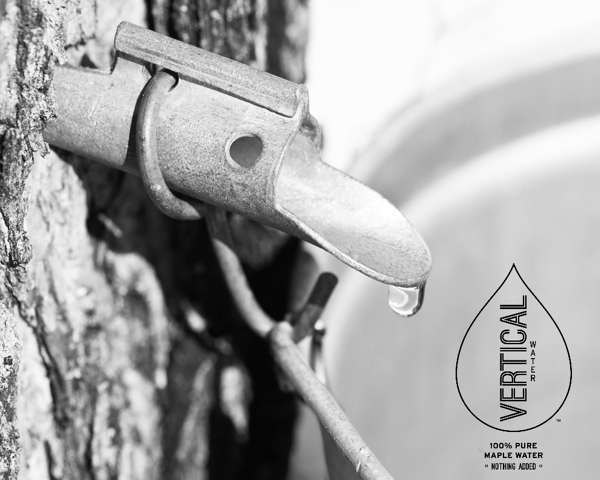 Vertical Water, which launched in April, is hoping to hop on the coconut water bandwagon while at the same time helping forest owners preserve their maple trees. [Image credit: Valentina Cugnasca]

Michael Farrell remembers the first time he tasted maple water – more or less by accident. He was trying to make maple syrup and it wasn’t coming out right, so he and a few of his graduate school friends decided to just drink the watery sap instead. To their surprise, they loved its subtle yet distinctively sweet flavor and forest-like aftertaste.

“I couldn’t stop drinking it. I still can’t stop drinking it, it’s incredible!” said Farrell, who went on to make a career out of his passion for all things maple. He directs Cornell University’s Uihlein Sugar Maple Research and Extension Field Station and wrote a book, The Sugar Maker’s Companion, about the art of sugar maple production.

In the spring, water naturally flows through maple trees from the ground up to provide nutrients for tree growth. Normally this water is tapped from the trees and boiled down into thick, sugary syrup, which is commonly adorned on pancakes. But as popular as maple syrup is, only about 1 percent of the Northeast’s maple trees are being tapped for syrup production, leaving the rest vulnerable to lumbering. “There is a lot of pressure from the lumber industry to cut down maple trees as prices for this lumber are particularly good,” Farrell says. Maple water, he thinks, may be the solution. “The best way to save maple trees is to tap them.”

Now, his dream of sharing his love of maple water with the world might actually be coming true, thanks to the ongoing craze for flavored waters. He’s working with Valentina Cugnasca, an entrepreneur who approached Farrell a few years ago looking for a way to make a profit off of maple trees without cutting them down. “That’s easy,” Farrell remembers replying, “drink the water. No one else knows about this except for maple growers.” Cugnasca’s company, Vertical Water, started selling maple water in April, and hopes it will take off much like coconut water did. In 2013, sales of coconut water reached $400 million – a 600 percent increase since 2009, according to the market research company Euromonitor International.

Some outsiders, however, wonder whether the craze for tree waters is all its cracked up to be. They note that an eight-ounce package of coconut water – the trailblazer in the field – costs anywhere from $1.50 to as much as $3.00, despite being about 98 percent water and 2 percent nutrients. And since the flavored water is typically transported long distances – whether coconut water from Thailand or maple water from New England – there’s a significant environmental footprint. “This is all for an extra 2 percent of nutrition than can easily be obtained from food,” notes Leslie Bonci, director of sports nutrition at the University of Pittsburgh Medical Center. “The truth is, it’s not that significantly different from water and people can get the nutrients they provide from fruits and vegetables.”

Advocates counter that the coconut water almost always comes from fruits that are already being used to make coconut milk, oil and other products. So if the water wasn’t being packaged, they argue, it would essentially go to waste. Some producers are also pushing for powder mixtures that can be transported much more efficiently.

All this effort is because, despite its minimal nutritional value, Americans cannot get enough of this refreshing, semisweet water. Back in 2003, few people had heard of coconut water. If someone had tried it, they were most likely at a beach on vacation sipping it out of a barely ripe, green coconut with a straw stuck through the middle. Now, if you walk into any health food store, supermarket or even gas station, you will find fully stocked shelves of coconut water with different brands and even seasonal twists like peach-mango coconut water in the spring or pineapple-coconut water in the summer.

Coconut water isn’t necessarily unsustainable, especially when all of its parts are used. “A coconut tree is called the ‘tree of life’ or the ‘tree of giving,’ and for a good reason,” says Gert van Manen, president of iTi Tropicals, which supplies coconut water to brand name coconut water companies. The outer husk of a coconut, also known as the coir, is used in products such as floor mats, brushes and mattresses. The brown shell can be used for fuel and activated carbon, and the white ‘meat’ of a coconut is often processed into desiccated coconut, coconut cream, coconut oil or coconut milk. “Coconuts are already being produced for their meat. Using the water is not a waste since it would be thrown out otherwise,” says van Manen.

The bigger issue with coconut water is transporting it to American shelves. When it first came out, all coconut water was processed and packaged in the originating country, and most still is. But Frederick Schilling, president of Big Tree Farms, an Oregon-based company that packages coconut water from Indonesia, finds this baffling. “We view the coconut water craze as a conundrum,” Schilling says. “We are shipping water around the world in Tetra Pak packaging that cannot be recycled. This is all for 2 maybe 3 percent nutrients.”

Schilling and his colleagues have found a way to evaporate the coconut water, leaving a powder that contains just the dehydrated nutrients, drastically reducing the amount of fuel required to transport it across the ocean to consumers. Known as Coco Hydro, consumers can purchase this powder in packets, mix it with eight ounces of water and enjoy a much greener version of a pre-packaged bottle of coconut water. “As consumers learn more about the environmental effects of coconut water, we hope they will take to this new product as a better alternative,” Schilling says.

iTi Tropicals is attempting a similar approach. About two thirds of its coconut water now comes from coconut concentrate. While not as efficient as powder, concentrate still takes up far less space than finished bottles of water during transportation. “One truckload of concentrate is equivalent to eighteen truckloads of regular coconut water,” van Manen says. Both Schilling and van Manen say they find no difference in taste, quality or nutritional value between their coconut water and the standard pre-packaged version.

Transportation is not quite as crucial a concern for maple water, since its sourced in the United States and is much closer to its major markets than Thailand or Indonesia. Cugnasca and Farrell maintain that their product deserves its green reputation, especially because Cugnasca has worked to create a business model that encourages landowners to preserve maple forests instead of lumbering their land or paving it over with development. Cugnasca named the product Vertical Water to foster the idea that water flows vertically up and down the tree but also to emphasize the importance of keeping trees vertical longer.

“We spent quite a lot of time working out a very strong operation model so that we were giving [landowners] viable financial incentives to keep their trees vertical,” Cugnasca says. Tapping maple water, Farrell adds, is a minor wound to the tree that heals quickly. He likens the process to a person giving blood. “We only drill one hole a year in a tree and take about 5 percent of the water, making the tree grow 5 percent slower that year.”

Drinking these tree waters does have some health benefits, though nutritionists say they’re negligible compared to the huge benefits of eating whole fruit. While these drinks are mostly water, they do contain beneficial nutrients, according to Liz Applegate, director of sports nutrition at the University of California, Davis. “Coconut water is naturally high in potassium, which many people fall short on,” Applegate says. Pittsburgh’s Bonci adds that maple water’s biggest nutritional benefit is that it provides about 30 percent of the recommended daily allowance of manganese, a mineral needed for healthy bones and functional nerves. In terms of calorie content, both coconut and maple water are lower in sugar than many fruit, sport or soda drinks. But Bonci says there is no compelling reason, nutritionally, for these drinks to be part of our beverage lineup every day.

While coconut water is increasingly popular with athletes, Applegate warns that for extreme exercise, such as long distance running, coconut water does not provide enough nutrients to recover adequately. This leaves coconut and maple water as simply refreshing beverages that taste good. “It all comes down to a matter of taste. If you enjoy coconut water taste, that’s great but don’t start expecting bodily changes,” Applegate says.

The entrepreneurs who are profiting from the coconut water boom acknowledge its nutritional and environmental limitations, but argue that shoppers should be free to choose it. Schilling, the Oregon producer of Coco Hydro, says his goal is to give consumers as much information as possible. “I want people to be sure of what they are buying.”

Meanwhile, Farrell and Cugnasca are keeping their fingers crossed that maple water sales will take off just as coconut water did, but are also confident that their product’s distinctive flavor and their vision to keep trees vertical will drive them forward. And in regards to their competition with coconut water, Farrell is too much of a maple partisan to compare the two tastes. “Maple water is delicious in its own way,” he says, “comparing the two would be impossible.”

In writing this reply, I hope this can help the world. Both human and natural, but unfortunately this will not be the case. Why? Because man is greedy and competitive. Instead of collaboration most seek and destroy like a battle from submarine attack. Like Pearl lHarbor. I am a social economist. And somewhat of an economist. Some may call me a futurist. Others call me “Coconut Ed” now and others just say he is crazy. But not when they all jump on the bandwagon.

You see in order to help and not hurt, one must have a sustainable system, a special business model that is truly as sustainable as possible. And the product, in this case beverage, must be as healthy-clean-Slow Food as possible. It must be a system that has respect. For nature, for God, for the world, each country. Land and sea…………

I am doing both. Starting with fresh-pure-nutrient dense coconut water that is truly raw. And now the same for maple water. I have been pushed out of stores by large soda companies who own some coconut water companies. We are all just vendors. I am a coconut water vendor. I have even pushed or driven a cart full of coconut, machete’ied the coconut open , popped a straw in and sold them on the streets.