Love in the time of animal testing 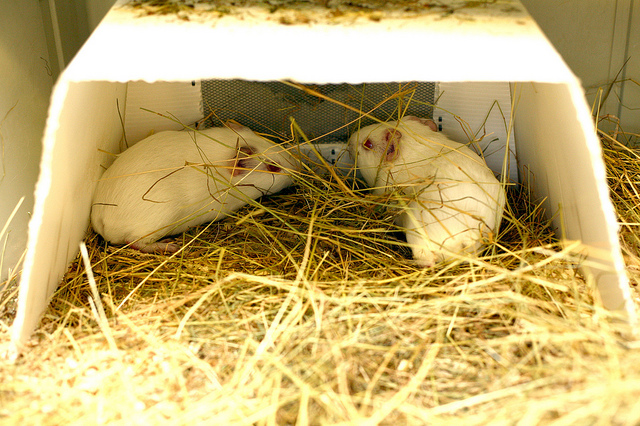 Will Eggplant be the World’s Next GM Crop?

What’s more important: an animal’s safety and happiness or its usefulness as a medical test subject? This past summer, a handful of animal activists including celebrities like Pamela Anderson spoke up against the ALS (Amyotrophic lateral sclerosis) Ice Bucket Challenge in defense of animal testing.

Scientists who research ALS and other medical diseases have unabashedly used genetic modification and other forms of testing on animals for years. Earlier this year, Chinese researchers ignited debate when they bred the first genetically modified pair of macaque twins, Ningning and Mingming. The scientists used a cut and paste technique that allowed them to cut parts of the genetic code when the monkeys were eggs, and then paste a preferred gene mutation in. The monkeys’ fates would be linear and precise: As test subjects for Alzheimer’s or Parkinson’s treatment, they would be sacrificed soon after birth—their brains spliced, their neurons counted.

Some researchers hailed the birth as a breakthrough that opened the doors to more accurate testing for neurodegenerative diseases. But animal rights groups pointed out that it would lead to more monkeys being used for animal testing. “Genetic engineering gives researchers almost limitless power to create sick animals with potentially devastating and disabling symptoms,” Humane Society International director Troy Seidle told the Guardian. So the question stands: Should we follow in the footsteps of the European Union, which recently prohibited animal testing unless there’s no other foreseeable alternative? Do the research benefits outweigh the harmful costs?

I think we need a balance, which is why I back the stance of the American Association for the Advancement of Science. As the world’s largest general scientific society, AAAS supports responsible animal testing for scientific research as long as researchers follow ethical objectives, like treating an animal subject with as much “care and sensitivity” to its pain and discomfort as they can while still maintaining research objectives, or using computer models and cell cultures if these can be substituted for animals. We need animal testing (at least for now) because of the medicines it’s already helped to create and the treatments it could spur in the future. The stakes for human health are too high.

Transgenesis is what scientists call the process of altering the genetic code of animals as embryos. Some transgenic animals include cows that produce low-fat milk and monkeys like Ningning and Mingming who carry the same genetic mutations as Alzheimer’s patients. Through transgenesis, scientists can test whether drug compounds are safe for the body.

Take for example, the fatal genetic disease progeria, which hastens aging in children. It stunts their physical height, inhibits their ability to move and affects their ability to grow hair. Progeria can lead to heart attacks or strokes, and there is currently no cure. But a couple of years ago, scientists genetically modified a colony of mice to match the gene mutations and symptoms of children with progeria, identifying a causal mutation, lamin A. They developed and tested a drug called lonafarnib on those transgenic mice, and it worked. In 2012, lonafarnib entered its final clinical trial and improved the symptoms of the children with progeria—they gained weight and were able to move more easily.

There are other success stories. Take neurologist Elizabeth Fisher, who genetically modified mice to mimic the genetic makeup of people with Alzheimer’s and Down syndrome. After breeding these mice together, her team found a common genetic mutation between the two diseases at a site called Chromosome 21. It’s well known that people with Down’s syndrome may be more likely to develop Alzheimer’s, but Fisher’s close examination of Chromosome 21 may yield therapies to prevent the formation of Alzheimer’s.

“An immediate end to animal research in the U.S. would be a death sentence for millions of people around the world,” Frankie Tull, president of the Foundation for Biomedical Research, told Newsweek. “If you’ve ever taken antibiotics, had a vaccine, had chemotherapy, an MRI, a blood transfusion, dialysis, an organ transplant, bypass surgery or joint replacement, you have been the beneficiary of research that started with lab animals.”

But animal-rights groups like People for the Ethical Treatment of Animals (PETA) argue that we shouldn’t rely on animals as accurate models of human disease. They refer to a 2007 JAMA study that analyzed how many highly cited animal studies actually translated into successful human research. “Most medical therapies in use today were initially developed and tested in animals, yet animal experiments often fail to replicate when tested in rigorous human trials,” wrote the study authors, Daniel Hackman and Donald A Redelmeier from the University of Toronto. What PETA overlooks, however, is that just because animal studies do not translate directly into successful human research, that doesn’t mean those studies are useless to medical therapy. Like all areas of science, pharmaceutical testing is a trial-and-error process in which success builds on failure and failed trials yield better hypotheses for further testing.

PETA also argues that artificially induced diseases of animals are never identical to humans. They’re right, but duplication isn’t necessary. Mice and humans share 95 percent of the same genes, and according to the NIH National Human Genome Research Institute, that evolutionary commonality makes it easy to find a human gene that’s comparable to a mouse gene, and to test for disease once that gene is located. Monkeys, for example, are able to mimic brain disorders that scientists have struggled to recreate for years.

It’s true that promising new alternatives to genetically modified animals are coming up all the time, including computer models or organoids, which are small clumps of human organs that researchers engineer in a lab to apply tests on. But these alternatives have a long way to go. researcher Sara Wells at the Mary Lyon Center in England told BBC Health that we don’t yet have enough information to input into a computer so that it accurately represents a human disease model.

Medical researchers therefore continue to turn to genetically modified animals and other forms of animal testing in order to gauge the safety of drugs and other forms of treatment. And while I feel for the animals used in lab studies, I cannot ignore the medicine that has kept humans healthy and alive for years. I think of the insulin my friends need for their diabetes, the advances we have made in treating childhood leukemia and the future treatments for Alzheimer’s that Ningning and Mingming could bring.

Would you feel the same if humans were the ones being used in research and the individuals conducting the research were members of some other species?

Great article! Thank you for sharing. Just a note though…using animals in research is already illegal if there is an alternative available. I believe the EU recently banned animal testing of cosmetics. However, testing cosmetics on animals is different than using animal models in medical research. Hopefully people are able to see the difference and to see how much we have all benefited from the responsible use of animals in research. Thank you to the researchers and the animals who have helped keep us healthy.

Very grateful, Jillian, for raising this important issue. Animal models are certainly far from perfect which is why there needs to be more investment in the superior scientific alternatives that will serve human health far better than animals ever can.

There is certainly no need to ‘ignore the medicine that has kept humans alive and healthy for years’. Drugs and medical techniques have been developed both with and without animals, but we cannot change the past – we need fast-track advanced techniques to protect humans from side effects that animal tests can’t predict and ensure that we don’t ditch drugs that could be beneficial to humans because of inaccurate animal test data.

Informative topic. More efforts should be taken to improve the current situation.