In the digital age, we’re all connected by electricity — and some microbes are too 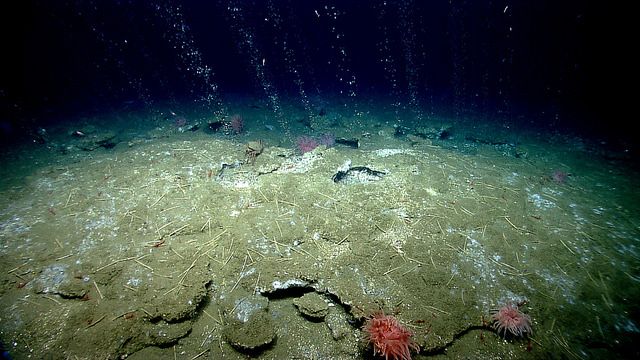 Methane seeps, where the gas leaks out of small holes in the Earth’s crust, are home to communities of microbes that work together remotely. Image Credit NOAA.

Deep in the oceans, methane gas slowly leaks out of the Earth’s crust, right on the doorstep of remarkable communities of two types of microbes. One type is Methanosarcinales, which is a group of archaea — a type of single-celled organism very distantly related to bacteria. Methanosarcinales gobbles up this methane. The second type of microbe is a sulfate-eating bacteria called Deltaproteobacteria. Take one away and the other doesn’t get as much done. Two new studies offer electrical insight into how these microbes may be working together.

Methane is the most powerful greenhouse gas, so the more these microbe communities can eat, the better for global climate. When the partnerships are successful, they can mop up three-quarters of the methane that leaks from the ocean floor.

“It’s a small but kind of wildly unknown part of the earth’s carbon cycle,” said Shawn McGlynn, a microbiologist now at Tokyo Metropolitan University who co-authored a recent experiment on these communities. Learning their secret might allow scientists to build other similar partnerships that can create compounds society needs (like fuels) or destroy those we don’t (like greenhouse gases).

Because each microbe digests more efficiently when the other is nearby, scientists thought one might be providing an ingredient the other needed. But when they looked closely at the communities, they saw that the archaea and bacteria lived much more separate lives than they would have expected if the microbes were exchanging some type of molecule. Instead of the two groups mixing so each microbe was near a partner, the microbes clumped with their own kind.

The scientists think the trick is electricity. The archaea break down methane and release electrons, creating a negative charge in their neighborhood. The more electrons build up, the harder it is to add more negative charges to an already negatively charged environment, so the archaea can’t break down methane as efficiently. But the bacteria pick up those electrons and use them to digest sulfate, creating a positive charge on Deltaproteobacteria turf. Keeping these charged poles farther apart actually makes it easier to send electricity between groups by creating a stronger electrical gradient. Electrons are generated by the archaea, flow to the bacteria, and are removed from the water, allowing the archaea to continue to break down methane.

McGlynn’s team also confirmed the archaea carry genes for large surface proteins capable of sending electrons on their way. Now, a German team has offered additional data about the same communities. They found that when both types of microbes and methane were in the same area, the bacteria seemed to create wire-like structures that carry electrons to meet the proteins on the archaea that release electrons.

Taken together, the two studies offer scientists a much better picture of how this particular pair of microbes works together, but they also have broader potential implications. McGlynn says that although microbes naturally live in pretty close quarters with each other, scientists don’t know much about how their neighbors influence individual bacteria.

Understanding why this particular relationship works, McGlynn said, will help scientists gain perspective on how other microbes may work together, based on electron exchange, spatial organization, or both. From there, he thinks scientists could one day “design synthetic microbial communities so we can do otherwise impossible reactions.”