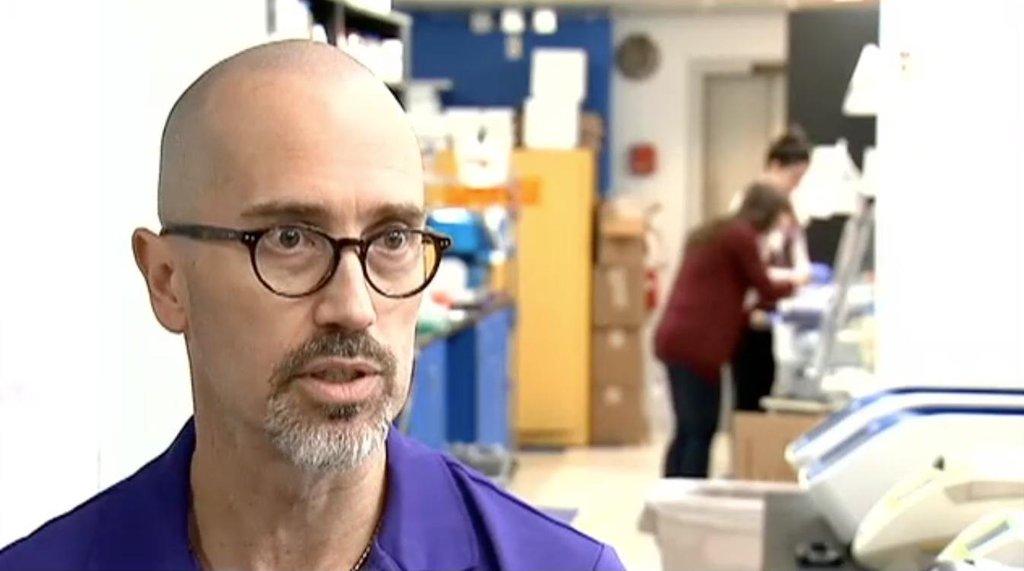 Todd Disotell spends a lot of time in the lab, but he’s always eager for another opportunity to spread the news about anthropology. [Image courtesy Todd Disotell]

We Love Lucy – but is She Science or Art?

In the middle of my conversation with Todd Disotell, a professor of anthropology at New York University, two of his colleagues stepped into his office and immediately began trying to convince him that they needed him to wear a Bigfoot costume for a department event that evening. After a few minutes of negotiations — mostly assuring him he wouldn’t have to wear it for long — he agreed. His reluctance immediately vanished as he began debating about which door to enter and when. Later, he assured me that this was a common sort of occurrence in the department.

It’s not hard to see how this could be a regular situation for Disotell. He sported a mohawk until recently and got his first tattoo — a simple DNA strand — at the age of 40. Now he proudly displays his latest tattoos, zombie Robby the Robot, Darwin’s tree of life, and Star Wars fighters and old biplanes dogfighting as well. One of his shelves is filled with action figures: Batman, Superman and the Incredible Hulk. On the top shelf behind his chair he displays what he assures me is the best whiskey collection on campus. He also showed me the Star Wars-themed ugly holiday sweater he had hoped to wear that day before it turned out to be too warm. He sums up his attitude quite simply: “I like to have fun, and I like science to be fun.”

He may be a fun-loving guy, but Disotell’s colleagues agree that his research is taken very seriously. He’s been instrumental in extending a major branch of anthropology. “He’s been at the forefront of molecular phylogenetics,” says Scott Williams, another professor in NYU’s anthropology department. “He’s essentially been figuring out the relationships between animals by their DNA.” His focus is on the evolution of Old World monkeys, and he’s devoted to his work. “He’s one of the few faculty members who’s here every day of the week,” says Shara Bailey, also in the department, noting that others in the department often choose to work from home for a day or two each week.

Research isn’t Disotell’s only passion — he’s also very invested in outreach. Since 1996, Disotell has been increasingly involved in bringing anthropology to a broad audience. He first ventured outside the bounds of academia in an MTV show called Sex in the ’90s, which focused on dating in an emerging hook-up culture. The show’s producers wanted a straight biological approach to how sexual attraction had developed between individuals in our species and Disotell thought it was an interesting opportunity. This first step set him on the path to becoming a self-labeled evangelical evolutionist.

The following summer he talked about Neanderthals on MSNBC and Fox. In more recent years, he’s been interviewed on the National Geographic Channel, contributing to a show called Everything You Didn’t Know About Animals. These appearances spiraled into quirkier opportunities, including a brief appearance on the first episode of the History Channel’s Ancient Aliens. Disotell didn’t let the show’s premise faze him though. “I got to talk about evolution,” he says. Even in ridiculous situations, Disotell looks for the opportunity for education. He made it clear in our conversation, however, that as far as he’s concerned, the ancient alien theories — that advanced aliens guided our development — don’t hold water.

Another strange opportunity came up in 2013, when Disotell was asked to be a judge on a SpikeTV show called $10 Million Bigfoot Bounty. He spent long days analyzing the evidence the teams brought back to him to determine whether they had found conclusive proof of Bigfoot’s existence. Initially, the show’s producers wanted him as a consultant, helping to define what constituted conclusive evidence. With Disotell’s input, they settled on the same rigorous standards that constitute any other determination of a new species: DNA and physical evidence. Every episode also featured Disotell as one of the judges eliminating the teams that provided the worst evidence. With such a high bar, none of the teams were able to score the $10 million prize.

Despite his fervent disbelief in creatures like Bigfoot, Disotell says it was a great opportunity. “I was in a no-lose situation,” he says. “Either I get to debunk Bigfoot or I help make the find of the century.” That wasn’t all he gained, however. As part of the agreement to be on the show, Disotell received $150,000 to design his own mobile laboratory, and after the show was over he got to keep the lab equipment. It’s all still in the Molecular Anthropology Lab at NYU. He still uses some of the research techniques from the show, such as examining the DNA from the blood ingested by biting insects.

Through the show, Disotell reconnected with scientific research. As a tenured professor, he no longer had much time to do lab work. “$10 Million Bigfoot Bounty” gave Disotell an opportunity to do his own field research, even if it was in search of Bigfoot. “It got me back sciencing,” he says.

Not that he didn’t already have an impressive track record. Perhaps the biggest indication of Disotell’s academic success is his students. When he began doing research in molecular phylogenetics, he had the only lab in New York City equipped to do it. Now there are a handful of others, all led by his former students. “Todd’s biggest competitors are his students,” his colleague Williams says.

Disotell considers his academic track record secure, so he’s always looking for new outreach opportunities. He’s started a YouTube channel, Talking S— with Dr. Todd and Natalia, with a fellow Bigfoot Bounty judge, Natalia Reagan. They discuss various methods of anthropological research — including analyzing poop to learn more about the animal that left it. Recently, they’ve been working on pitching the concept as a full-fledged TV show. Of course Disotell will make sure it has a sense of fun. “He has a great attitude when it comes to filming things out of his comfort zone — like dance routines or slapstick comedy!” says Reagan. “I’ve asked Todd to do some ridiculous shoots and he almost always replies with an enthusiastic ‘yes!’”