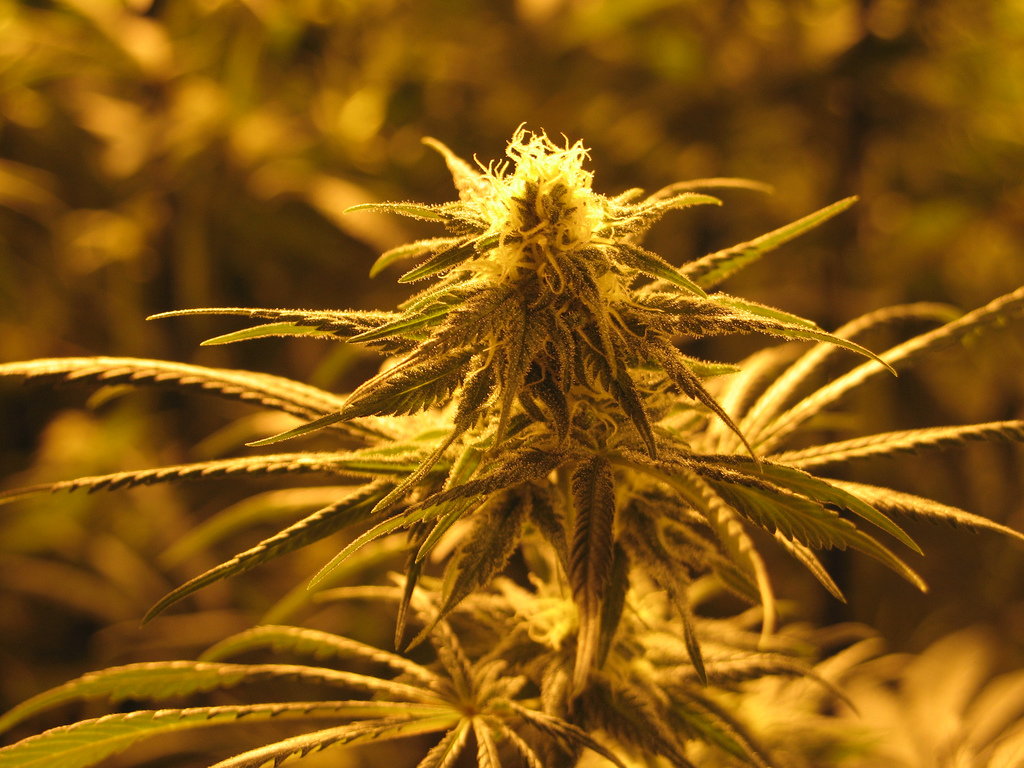 Marijuana can blossom without the sun – but at a great energy cost. The indoor growing industry has a $6 billion energy bill, according to energy expert Evan Mills, which is twice that of the nation’s entire pharmaceutical manufacturing industry. [Image credit: flickr user Bob Doran | CC BY 2.0]

Imagine two rooms. In one, 28 standard-sized refrigerators are humming. In the other, there are four marijuana plants growing under standard industry conditions. Which room uses more electricity?

It’s not the room with all those refrigerators. In a typical marijuana growhouse, plants are blasted with intense, energy-gulping lights brighter than the sun – on par with the lighting in surgical rooms.

The cumulative impact is stunning. The indoor marijuana industry already uses about as much energy as two million average U.S. homes, a $6 billion cost that represents about one percent of the nation’s total electricity use, according to estimates by Evan Mills, a senior scientist at the Lawrence Berkeley National Laboratory.

And the country is set to grow even more weed: Seven more states legalized marijuana in 2016, permitting the drug’s use in over half the country – either recreationally, medically or both. The massive power bills are encouraging growers to reduce their energy use by finding better ways to light their plants. Some growers are embracing sunlight, and others new lighting technology.

Costs are not the only concern. Most electricity in the U.S. is generated from burning coal and natural gas, which pollutes the air and adds potent greenhouse gases to the atmosphere.

“We’re trying to put this healthy, alternative medicine into people’s bodies, and yet we’re polluting the Earth by growing it this way,” says Jamie Perino, the owner of Euflora, a company that grows and sells marijuana in Colorado. “It’s an oxymoron. It’s just not a green industry as far as environmental impact goes.”

But there is also some reason for optimism. Legalization diminishes the taboo of reefer, allowing growers to bring energy efficiency into the open – quite literally. Euflora’s Perino uses both types of grow houses, a traditional indoor warehouse and an outdoor greenhouse, and can see the economic wisdom of the latter. “My electricity bill for the greenhouse is, depending on the weather,  between 15 and 30 percent of what a normal warehouse would be,” she says.

The plants like the natural light, which also kills bacteria and mold, and the greenhouse protects the cannabis from pests while still allowing the sunlight to stream in and fuel the plants’ growth, free of charge. “The greenhouse is exciting to me because in Colorado we have over 200 days of sunshine a year,” says Perino, who sells her marijuana at a 6,000-square-foot retail space in downtown Denver. “So to not utilize and harness the energy from the sun would be kind of silly,” she adds. “It’s where I’d like to see the future of the industry going.”

But some companies still prefer to grow indoors, and have adapted to use less energy there. Another Colorado business, LivWell Enlightened Health, combats energy costs with more efficient lighting. Traditional high pressure sodium bulbs produce a lot of light and yield great weed – but they also get hot and gulp energy.

“Our greatest success has been converting large portions of our facility to LED lighting,” writes Andrew Alfred, LivWell’s Chief of Research and Development, in an e-mail. LED lighting produces more light with less electricity, explains Alfred, and in some areas the company has reduced its electricity use by 70 percent. Because the lights use less energy, they produce less heat, which reduces the need to cool their warehouse to an ideal 80-degree temperature. It’s a domino effect of efficiency.

With marijuana legalization in 29 U.S. states, businesses are honing their growing science and producing weed that is more potent than ever. [Image Credit: flickr user Presna 420 | CC BY-NC 2.0]

Across the sea, the Dutch have sold marijuana in coffee shops for 40 years and see why Americans might like to grow indoors. “The advantage of growing indoors is that it gives precise control over every element,” says a spokesperson for Dutch Passion Seed Company, a business that sells marijuana seeds and lighting equipment in Europe. Such precision can help companies produce marijuana products with consistent ingredients and quality, says the Dutch Passion spokesperson, who asked for anonymity because the Dutch government has yet to formally legalize marijuana.

Most Europeans, however, prefer to harness sunlight and grow pot themselves in small greenhouses. “The greenhouse is the more efficient way of growing weed,” says the Dutch Passion spokesperson. In the temperate Netherlands  – which has lower climate-control costs than places like blizzard-prone Colorado – “the cost of growing without light supplements is almost free,” the spokesperson explains.

Some places, like Northern California, offer a moderate and sunny climate that is just right for marijuana to blossom outside without a greenhouse. This eliminates energy and construction bills, but at enormous cost to the environment, says Jennifer Carah, an ecologist for the Nature Conservancy who recently published a study on the matter.

On rural farms, irrigating marijuana crops has depleted drought-prone streams, and clearing swathes of trees deforests the land. Insects and other pests also like weed, so outdoor growers often introduce pesticides into the environment, which can harm wildlife. Growers bait rats and squirrels with “anticoagulant rodenticides” – better known as rat poison. The toxins, explains Carah, do not just kill pests. Predators like owls eat the poisoned rodents, poisoning themselves.

To Carah, these adverse environmental effects aren’t surprising because agriculture typically clears land and demands water. But unlike other crops, marijuana cultivation is rapidly expanding thanks to legalization, and its environmental impacts are only now being widely recognized. Some local governments, like California’s Mendocino County, have published best practices guides for rural cannabis farmers on responsible pesticide use, limiting erosion and promoting efficient water use. This is good news for California, which already produces more pot than any other state.

Governments can also help growers use less energy. Oregon legalized marijuana in 2012, making growers eligible for assistance from the Energy Trust of Oregon, a state agency that works to make businesses more energy efficient. At no cost, the agency will visit a grower’s business and provide consulting on energy savings. Most of the savings come from more efficient lighting, says the Energy Trust’s Sam Walker. If a business accepts the Energy Trust’s recommendations – perhaps by installing LED lights – it will be rewarded in cash for the energy saved. In 2016, says Walker, 17 marijuana-growing businesses received rewards.

Marijuana’s legalization may have initially created an unexpected surge in energy demands, but it may also turn out to be the industry’s energy savior: Legalization eventually allowed Euflora’s Jamie Perino to comfortably leave the indoors and exploit the sun, while the greenhouse’s transparent walls still protect her crops from the whims of weather and the hunger of pests.

“Growing in the greenhouse,” she says, “gives you the best of both worlds.”