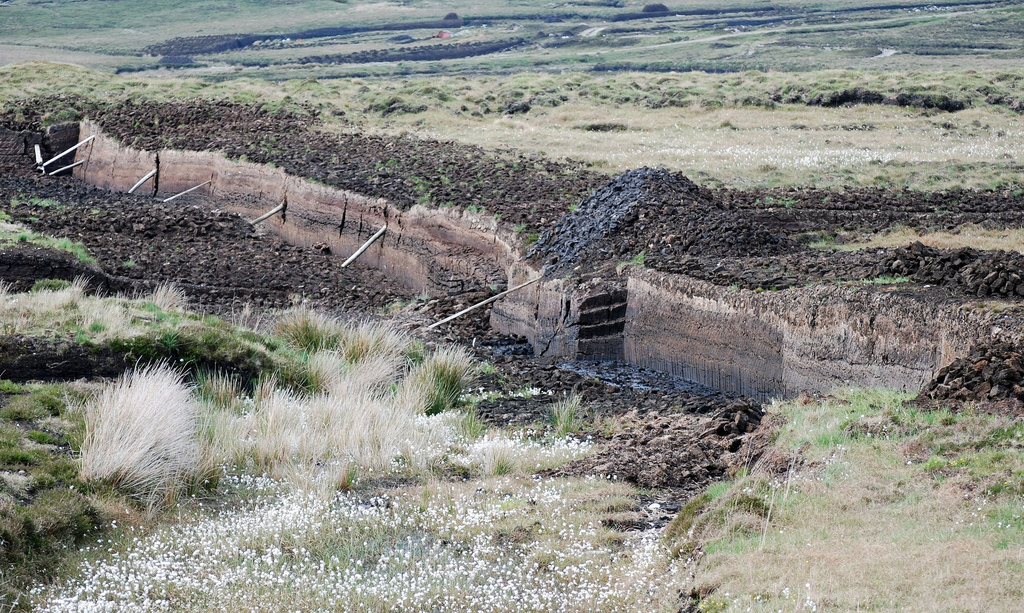 Is Finland an environmental paradise? A recent, highly regarded effort to rank 180 nations based on environmental performance seems to think so: The wealthy Scandinavian country was at the very top of the list.

Yet some environmentalists and scientists are asking why the Finns – and residents of other countries, too – are contributing to climate change by destroying one of their important natural resources. No, it’s not Finland’s stunning boreal forests, which are generally in excellent condition. It’s a much more humble, yet crucial natural feature: peat bogs, muddy wetlands filled with decaying plant matter that the Finns drain and mine for energy. The country’s 130 peat-fired heating and power plants have moved millions of tons of carbon from the ground to the atmosphere. In doing so, those plants produce about as much pollution as if they were burning low-grade coal, which makes sense because the mud-like peat is actually a precursor to coal.

“I think at the moment they’re going in the wrong direction,” says Paloma Hannonen who oversees peatland conservation at the Finnish Association for Nature Conservation, the country’s largest environmental group. In 2015 a new government took office, rolling back many of the environmental initiatives started by the previous administration, Hannonen says.

Peatlands cover just three percent of Earth’s land surface but, amazingly, store more carbon – a whopping 550 gigatons – than the rest of the world’s vegetation combined. But in some smaller countries, including Ireland, Estonia and Finland, those bogs are threatened by demand for fuel and timber. And even in much larger countries with millions of acres of undisturbed peatlands, like Canada and Indonesia, bogs are being mined and drained for agriculture.

“Even those of us who are in the industry don’t use the word ‘sustainable’ because it is not sustainable,” says Donal Clarke, who worked at the Irish peat company Bord na Mona for 17 years. “Once you open a bog it’s gone.” While peatlands can slowly regenerate, they accumulate only half a millimeter of peat per year. Pristine bogs can be tens of thousands of times deeper than that.

Yet for thousands of years, especially in Europe from the Middle Ages to the mid-twentieth century, peat mining has proven irresistible to humans seeking an easy-to-harvest fuel source. And the practice is still common in countries that lack ready alternatives — even in places where environmentalism is popular, like Finland and Ireland.

“Because we have very limited energy sources in Finland, peat is used,” explains Jaakko Silpola, the former secretary general of the International Peatland Society, and a senior specialist at the world’s largest peat company, Finland’s Vapo Oy.

Finland claims that only one percent of its peatlands have been harvested for fuel from previously drained land. But “that’s complete bullshit” according to Teemu Tahvanainen at the University of Eastern Finland, who headed the peatlands group that created the first European Red List of Habitat, which came out just a few months ago.

Finland might vastly overestimate the size and number of its peatlands. Tahvanainen says that many areas designated as peatlands are really forests with only a thin layer of peat. What’s more, he says Finland has a low bar for what land it considers “degraded,” or land that is damaged enough that the government surrenders it to mining. In Finland, a bog is considered degraded even if only it’s peripheries are drained, Tahvanainen says.

“It’s completely foolish to say that just one percent is used for mining. It’s just, it doesn’t make any sense,” says Tahvanainen.

Finland has already drained roughly 56 percent of its 22 million acres of peatland, mostly for forestry, and the country isn’t going to stop anytime soon. Finland is trying to eliminate coal and cut its use of oil for transportation in half by 2030, and during the transition peat will continue to provide about five percent of the country’s energy, according to Silpola, at the peat company Vapo Oy.

While conservationist Hannonen understands that many want Finland to use more domestic sources of energy, she highlights that peat is no better than coal, and harvesting it degrades the country’s own habitats. “I definitely think it’s a very silly argument,” says Hannonen.

What particularly distresses scientists and environmentalists is that peat is not only a source of carbon when it’s burned. As soon as a peatland is drained, the peat beneath begins decomposing and releases ancient stores of carbon dioxide, says Samu Valpola, the head of peat resources at the Geological Survey of Finland.

Peatlands develop in two stages that produce different types of peat. Energy companies want peat from a bog’s lower layers, so they must harvest the whole deposit, blowing the mature ecosystem back thousands of years and making restoration much more difficult.

In contrast, the peat industry in Canada harvests only the top layer, which is dried and sold as a spongy moss and used for animal bedding and horticulture. Because most of the bog is left intact, reflooding and replanting can restore a harvested peatland to an active carbon sink in about five years, according to Line Rochefort, the industrial research chair in peatland management at Laval University in Quebec. In 2015, one quarter of Canada’s production peatland was under restoration, she said. And the country isn’t going to run out anytime soon: It has nearly 280 million acres of peatland, compared to around 150 million in the U.S., where about half is in Alaska.

While Europeans reconcile their historical use of peat with the realities of climate change, most of the damage is actually happening on the other side of the world.  “The Irish, Finnish, Swedish, and Estonian extraction would just not be measurable compared with what’s happening in southeast Asia,” says Ireland’s Clarke, who also serves on the board of the International Peatland Society. 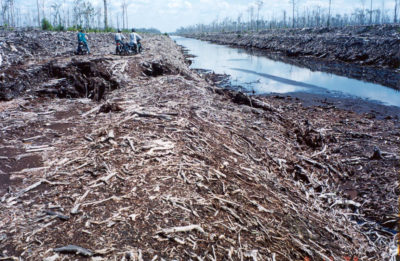 Indonesia’s Mega Rice Project of the mid ‘90s intended to increase the country’s self-sufficiency, but the failed enterprise wound up simply degrading hundreds of thousands of acres of tropical peat forest. Here peat collapses into a drainage channel meant to dry the land to make it suitable for rice cultivation. [Image Source: Jack Rieley | permission given by Rieley]

Every year, Southeast Asian peatlands release roughly 2 billion metric tons of carbon dioxide – equivalent to about 30 percent of global emissions from fossil fuels – as they are drained, degraded and converted to agriculture and palm oil plantations, according to a 2013 report by the World Energy Council. What’s more, tropical peat forests are biodiversity hotspots, home to endangered animals like orangutans and Sumatran rhinos.

In Indonesia, draining tropical peat forests to clear land for palm oil plantations is often seen as a route to prosperity, but conservationist Farwiza Farhan says the trade-offs aren’t worth it. “Of course it does bring in employment and economic development to an extent, but we have to ask ‘at what cost?’” asks Farhan, the chairperson of Forest, Nature and Environment of Aceh, a nonprofit group based in Aceh, on the Island of Sumatra.

The palm oil companies displace people in rural areas and disrupt the interactions between the communities and their surroundings. Where once Indonesian locals might have gathered something from the forest, now they must buy it, explains Farhan. Fires set to clear land often end up burning out of control as the peat itself catches. Peat fires in 2015 alone cost Indonesia at least $16 billion, about two percent of its gross domestic product that year, the World Bank estimates.

Theoretically, Indonesia could restore some of its peatland, as Ireland, Canada and other countries have done. The Indonesian president recently formed a Peatland Restoration Agency with a target of restoring roughly five million acres of peatland by 2020. But “they haven’t got money to do anything,” says Jack Rieley, a geographer at England’s University of Nottingham who has studied Indonesia’s peat forests for 25 years.

Based on Rieley’s estimates for restoring peatland in the U.K., meeting their five million acre goal would cost Indonesia at least $4 billion. Even then, the recovering peat forest would need another 200 years to approach biological maturity. “I don’t know a peatland ecologist anywhere that will say that it’s likely to succeed,” Rieley says. “If you ask me do I think there’s any great hope, I would say not really.”

Back in Finland, Hannonen remains determined to change what she can in her own country. “I think it’s important that everyone does their own share no matter how small or big countries [are],” she says. Finland has peat, and they can decide to use it or not to use it. “It’s in our own hands,” says Hannonen.