In the fall of 1973, a prominent climate scientist named Reid Bryson took the stage at an American Association of Geographers conference, and to a crowd of hundreds packed inside the University of Wisconsin-Eau Claire banquet hall, he explained that the planet was cooling.

A young student named Steve LaDochy recalls sitting in the audience and being impressed with Bryson’s climate presentation, which showed that a heavily-polluted Earth had entered a cooling period. “He brought along slides, and it looked to me like very compelling evidence. So I went along with it,” says LaDochy, who today studies geoscience at California State University, Los Angeles.

Bryson wasn’t alone in his beliefs — and still isn’t.

A 1974 CIA report expressed concern over “detrimental global climate change,” citing more snow, cold spells and weather anomalies. In 1976, James Hayes, who studied Earth and environmental sciences at Columbia University, told The New York Times that global cooling had already begun, and if this became a long-term trend, “there is not much doubt that we will build substantial ice on the Northern Hemisphere continents.” Even the weather seemed to agree. Harsh winters brought historic blizzards, including the destructive “White Hurricane” of 1978.

But Earth was not cooling. An ice age was never imminent. And few scientists agreed with Bryson’s claims, although this hasn’t prevented climate change deniers from using these unfulfilled cooling forecasts to attack the legitimacy of climate scientists today. The new op-ed hire at The New York Times, Bret Stephens, perpetuated the idea on Fox News. “This is just the next stage of preposterous in the global warming story,” said Stephens. “In the 1970s we were supposed to believe in global cooling, in the 1980s it was a nuclear winter, in the 1990s it was mad cow disease. Global warming was the flavor of the decade – I can’t wait to see what the next scare is going to be.”

Still, skeptics of modern climate research like Stephens continue to cite the illusory 1970s global cooling census, claiming that today’s researchers must be equally hoodwinked about warming trends. But the present climate consensus is real, and it’s founded upon dramatic advances in climate research, similar to technological leaps made in biomedicine and computing. Climate scientists understand things that we had no idea about 50 years ago, notably, that Earth’s oceans are the primary cause of cooling blips, like those in the 1970s. And perhaps more importantly, they know that Earth’s accumulating heat is hiding in the oceans.

“The oceans are the big effect,” says Bill Patzert, a climatologist at NASA’s Jet Propulsion Laboratory. In a recent study in Science, Patzert illustrated how the Pacific Ocean, which covers over 30 percent of Earth’s surface, can control global temperatures. But he also realizes what misled some scientists in the 1970s. In a time before the government bothered to limit air pollution, foul hazes settled across the United States, blocking out sunlight and cooling North America.

LaDochy remembers it well. “In the 60s and 70s, pollution was just atrocious, especially in Los Angeles. There were no emissions-controls on cars, and there was a real thick haze over many other cities too. And those particulates block sunlight. It’s like having a real dusty window.”

President Lyndon Johnson and Congress took notice, passing the Clean Air Act, which radically reduced pollution over U.S. cities. “That was the kind you of smog you could taste and see,” says Patzert, who certainly notices the difference now.

So when the esteemed scientist Reid Bryson took the stage in the 1970s – with LaDochy in the audience – dirty bits of pollution were still spewing into American skies, obstructing sunlight and cooling the continent. Fittingly, Bryson called this the “human volcano.”

But as the pollution lessened and the skies cleared, Bryson’s warnings vanished like the fine particulate matter that once colored the air. Six years after Bryson’s talk, the National Research Council, a panel of science, engineering and medical experts, convened to discuss matters of climate and carbon dioxide, a potent greenhouse gas. They concluded that the planet’s warming was not just real, but a threat to worldwide communities. Global cooling was moot.

Hazy skies, however, were just a small chapter in the 1970s cooling story. The true culprit wouldn’t be known for another twenty years, and it wasn’t easy to see. It hid in the ocean — specifically, the Pacific Ocean.

In the late 1990s, a group of climate and salmon researchers, after sorting through decades of data, discovered that runs of King Salmon fluctuated in a strange way. For decades at a time, the salmon numbers would stay well above average, and then without warning, they would abruptly reverse and swing lower, and remain that way for decades.

The researchers followed the fish, which led them to a powerful and previously unknown climate phenomenon. They found that fish runs matched closely with the surface temperature of the ocean. The runs were well above average when the Pacific Ocean stayed cooler for 30 consecutive years, from the late 1940s to the late 1970s. Then, temperatures abruptly shifted in 1977, staying warmer than average for two decades, during which the salmon runs were markedly lower.

This long-term fluctuation, called the Pacific Decadal Oscillation, is a naturally occurring phenomenon that cools or warms the vast swathes of air that sit over the Pacific Ocean. As the 1970s proved, it can affect temperatures globally. “When you have large scale shifts there, you feel it all over the planet,” says NASA’s Patzert.

Although the 1970s are known for their string of brutal winters, global temperatures actually leveled off during an entire three decade period, beginning in the late 1940s. Unwittingly, then, Bryson and others of the global cooling camp experienced a double-whammy of climate distortion: A massive cooling punch from colder surface temperatures in the Pacific Ocean, with the added influence of sun-obstructing pollution.

Earth’s largest ocean will continue to sway global temperatures, so bouts of cooling are on the horizon. But, warns Patzert, one shouldn’t confuse these decades of cooling with any sort of warming hiatus.

The true measure of global warming lies in Earth’s oceans, he says, and the reason is simple. Land, dense and rocky, just doesn’t have a capacity to absorb Earth’s accumulating heat. But the oceans do. “Ninety-five percent of all that heat is going into the oceans,” he says.

That’s why the seas are expanding – just like water molecules moving apart in a pot of heated water. Add glacial melting to the mix, and the sea level is rising about an inch a decade. And this is expected to amplify.

Forty years after hearing Bryson argue that a cooling period was imminent, LaDochy, now a graying, seasoned scientist, recognizes how far climate science has come. “We know so much more now,” he says. Not least, a host of satellites have come online, continuously scanning our oceans and measuring the gases in our atmosphere. We can easily identify global trends in carbon dioxide, global temperatures and sea levels.

And after considering a century’s worth of climate data – a luxury earlier researchers did not have – Patzert is confident that the oceans will keep expanding. He is so sure, in fact, that he is prepared to wager on it.

“I’m ready to make some easy money. Anyone want to take a bet against sea level rise – I’ll take all comers,” he says. 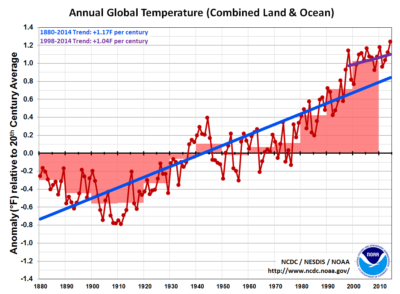 The top graph shows that Earth’s surface temperatures are susceptible to influences like the Pacific Ocean, and can rise and fall off for years or decades at time (within the greater warming trend). The bottom graph depicts global sea level, which is not as susceptible to the influences on Earth’s surface. Global sea level rise is the true global warming curve, says NASA’s Patzert. [Image Credit: NASA | CC 0]

Empirical research is based on building prediction models and there is not one that has proven accurate. Please share them if they exist. And any research I have conducted always looks at both positive and negative outcomes of the results. Why do no authors discuss the positive outcomes of increased CO2 since there are if you look at plant growth. And what temperature should the earth be because if you don’t know that (and NO ONE does) how can you discuss temperature rises? And studies by very reputable government agencies report that the temperature has risen less than 1 degree Centigrade and that happened prior to 1950. Until I see real scientific research I am a “Climate Denier” and damn proud of it.

I totally agree. Who does decide what the earth’s temperature is to be? Why is it that people don’t understand this.

Scientists are sending robots to mars to discover life past & present so far no scientific proof? While humans are destroying planet earth! & everything on it! eventually the human race? this is exactly why other intelligent life forms avoid confrontation with humans! We can’t be trusted! If life is discovered out side the earth? humans eventually will destroy it! just look at what we are doing to the planet earth! humans must respect the earth! before it’s to late! or earth will end up a dead planet like mars.

Concerning Patzert’s wager that sea levels will rise, it would only be a proper wager if he stated by how much? Let’s say he chooses NY City (whose tide gauges are very carefully monitored) – will he wager that levels from 2000 – 2100 will rise by the IPCC AR5’s projection of 550 – 800mm, at least? And how will he deal with AR5’s published uncertainties of +/- 300mm? Only the flat-earth fringe of climate emergency skeptics deny that sea level rise will not continue to increase. If the linear increase over the last 100 years continues, as most climate skeptics predict, the rise will be 300mm by 2100. Oops! A scientist who can’t formulate a scientific wager properly, is just shooting the breeze.