Five reasons to fall in love with the cockroach

They look gross — especially up close — but the humble roach has a lot to offer researchers developing better antibiotics, robots and even sustainable foods 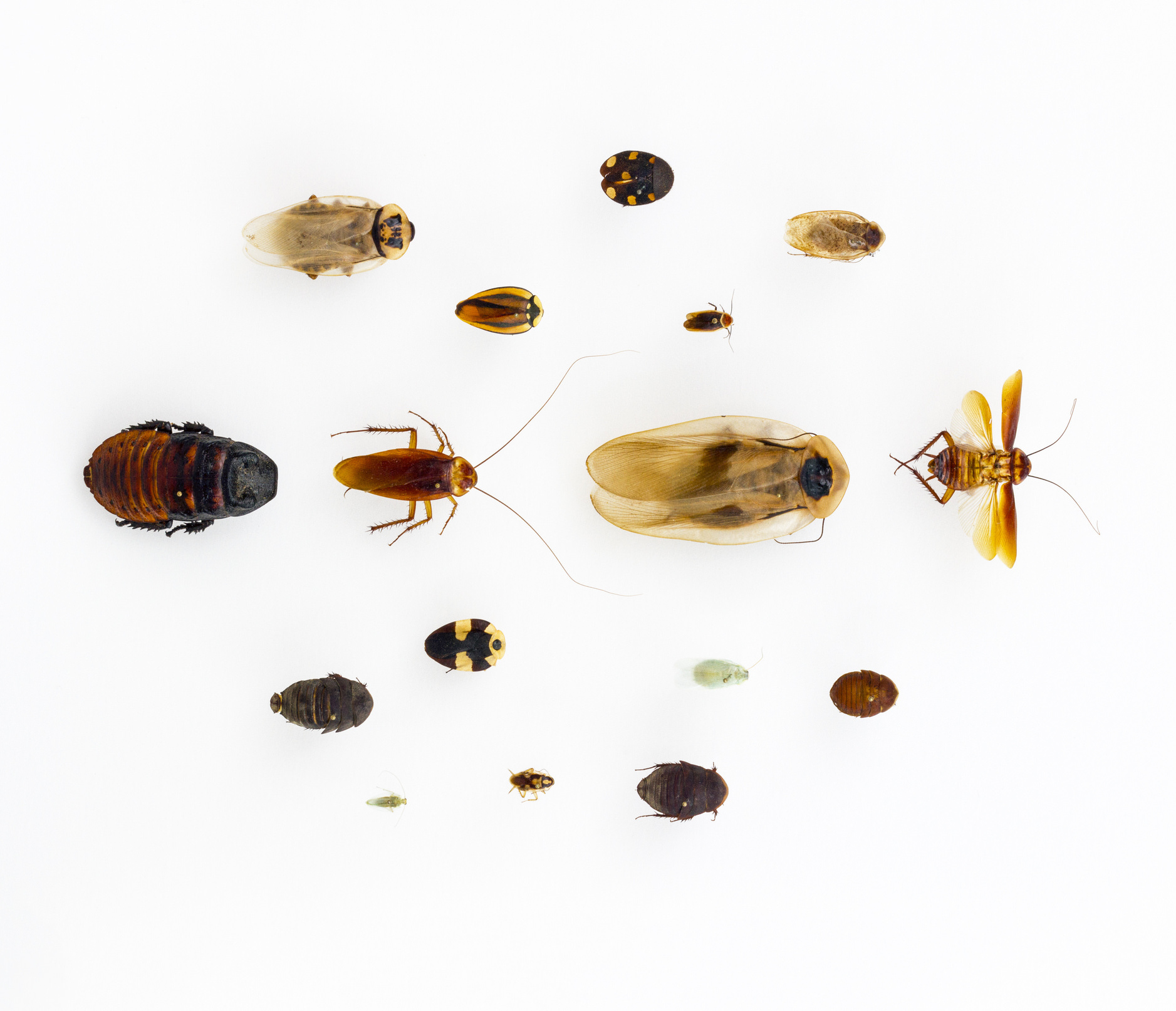 What’s not to hate about cockroaches?

They skitter. They scurry from sewers to kitchen sinks. They’re disgusting, disturbing and seemingly indestructible.

The planet’s 4,600 species of cockroach might make us squirm, but they also offer insight for humans on complex problems in medicine, technology and robotics — if we can stop swatting and stomping them long enough to take a good look.

Simon Sponberg, an assistant professor of physics and biology at the Georgia Institute of Technology who studies cockroach locomotion, says the hair on the back of his neck still stands up when he handles them. Still, he says, they’re inspiring critters.

“I have no love for cockroaches, but you don’t have to love insects to be able to study and appreciate them,” Sponberg says. “There’s enough interesting science there that my curiosity can overcome my initial feeling of discomfort.”

Here are five reasons to give the reviled roach a chance:

Reason #1: It may be the just the super bug we need to fight superbugs!

Cockroaches have been around for 300 million years — and that survival rate is not by luck.

They inhabit hazardous, unsanitary and pathogen-dense places such as feces, sewage pipes, garbage and rotting corpses. They can survive a month without food, 45 minutes underwater and blasts of all sorts of radiation, insecticides and infectious diseases.

Their hardiness is due in part to a powerful defensive mechanism. When cockroaches detect potentially harmful microbes, their bodies produce pathogen-thwarting proteins. Now, researchers are exploring whether those cockroach proteins might help in the development of drugs to overcome antibiotic resistance in humans.

Over the last decade, scientists have successfully isolated antibacterial proteins produced by various species of cockroach and tested their ability to battle bacterial infections such as strep, E. coli, salmonella and pneumonia.

In 2011, British researchers determined that 100 microliters of a cocktail of roach and locust brain tissues could kill more than 90 percent of an infectious bacterial mix. In 2016, researchers identified 11 cockroach-produced peptides that showed strong antimicrobial activity against harmful bacteria without toxic effects.

Scientists have not yet determined the genetic sequence of those peptides, much less developed them into any kind of therapeutic drug, but there is already growing scientific evidence that cockroaches harbor medically useful substances.

Reason #2: They’re a folk remedy backed by some credible science.

Cockroaches have been an ingredient in folk medicine around the world to treat everything from heartburn to alcoholism, epilepsy, bronchitis, diarrhea, stroke and menstrual cramps. Cockroach soup is a folk treatment for uterine and urinary problems in parts of India. In Latin America, the giant cockroach is used to treat asthma.

Despite this long history of entomotherapy — insects as medicine — researchers have only recently begun testing the effectiveness of cockroach compounds and extracts, writes Rutgers University medical chemist Lauren Seabrooks in a 2017 paper on insects as an underrepresented resource for biologically active natural products.

Though it’s still early days for cockroaches and Western medicine, there is already limited medical evidence from Chinese researchers suggesting a biological basis for at least some of those roach-infused folk remedies. A 2014 experiment led to the discovery of cockroach compounds toxic to human liver and breast cancer cells, and another 2016 study isolated five new cockroach compounds and identified two as potential drug targets for cancer. In a small clinical study in China of 60 sepsis patients, those treated with cockroach extract improved significantly.

Research has also supported the effectiveness of a cockroach tincture for tempering asthma and allergic reactions, as well as the wound-healing properties of a cockroach ethanol extract used in traditional Chinese medicine.

“It is clear that Mother Nature has more to offer the world of medicine than just plants,” Seabrooks writes. “Public perception of insects should not deter scientific pioneers.”

Reason #3: You can eat ’em and feel good about the planet.

In the near future, you might be okay with cockroaches in your kitchen.

Last year, Turkish researchers suggested a non-toxic, eco-friendly alternative to Saran Wrap by demonstrating that a film extracted from the wings and outer bodies of roaches was temperature-stable, and that two common pathogens could not form a slimy film on its surface.

Cockroaches might not only just wrap food someday: They might be baked right into it. As a protein source for humans, insects are cheaper to raise, produce less greenhouse gas and require less food, water and space than traditional livestock.

Producing one gram of edible beef protein, for example, requires between at least eight times as much land and five times more water compared to what it takes to produce a gram of mealworm protein, according to Italian research published in 2015. Beef cattle also emit between six and 13 times more carbon dioxide than mealworms do, Dutch scientists found in 2012.

What’s that? You’re not eager to munch on a roach? Well, maybe you just need to open your mind. In 2017, researchers in Brazil conducted a study on taste and found that 31 out of 51 judges would consider buying a protein-boosted bread baked with flour that was enriched with dried, crushed and sieved cinereous cockroach. Yum!

Reason #4: They might pose a health risk, but it’s not the one you think.

If anyone was going to extol the value of cockroaches, it would be Schal. But when it comes to the two species most common to human homes, the American and German cockroach, he has nothing nice to say.

“If you consider all … species of cockroach, the net value is positive. But if you consider the ones that reside in our homes, clearly, most definitively, it’s detrimental,” Schal says.

Most of us think of roaches as a filthy infestation of our homes, restaurants and hospitals. We’re only partly right about the health risks they pose, Schal says.

Plenty of studies have shown cockroaches can carry bacteria, viruses and fungi that are harmful to human health, such as salmonella and bacteria that causes tuberculosis, he said. But there is no evidence that a cockroach has ever gotten anyone sick.

“The potential is there, but no one has ever documented a clear pathway where a cockroach causes a disease or outbreak,” Schal says.

On the other hand, cockroaches undoubtedly produce allergens. There is strong evidence for the relationship between household exposure to cockroaches — especially in poor, urban neighborhoods — and increased risk of severe asthma for children and young adults.

On the bright side, researchers have  made progress toward genetically mapping cockroach allergens and have begun early testing of immunotherapy as a treatment for cockroach allergy symptoms.

If cockroaches could compete in the  Olympics, they would be a threat in multiple events.

Their athletic abilities explain how they can sneak through the tiniest cracks and survive the stompiest squishes.

Kaushik Jayaram, a postdoctoral fellow at Harvard University, studies cockroaches’ extreme performance to build better robots. In one experiment his lab slowed down footage of the 75-millisecond transition cockroaches make from horizontal to vertical surfaces to learn how to make robots that can both run on the ground and climb up walls. Similarly, what Jayaram has learned about cockroaches’ flexible exoskeleton and spiny legs could help develop search-and-rescue robots that squeeze through rubble after disasters, he says.

In a study released in March, Johns Hopkins researchers examined how cockroaches traverse rough terrain and applied their observations to improve a six-legged robot’s ability to pass over tall obstacles.

Biomedical engineers, meanwhile, are studying the cockroach’s anatomy. Cockroaches have a network of flexible, micron-scale tubes that pipe oxygen-rich air from valve-like structures along their exoskeleton and directly to cells — no blood circulation necessary.

“I do not want a cockroach in my backpack or my bedroom or next to my food. I don’t think cockroaches are cute,” Harvard’s Jayaram says. “But they make a great scientific model. Broadly speaking, nature has a huge library of design ideas.”

I don’t care,,, I am deathly scared of cockroaches….. Since I was a child until now … If there’s a flying roaches… I will hide somewhere…. And closed the doors … To not enter in my room… Bcoz they are dirty and stink….I am bite with roaches….in my feet ..

Wouldn’t it be something if GOD actually resided in these creatures? Jesus sure hinted about it. “Food” for thought, lol.