How do birds learn their songs?

They don’t have dating apps, so birds find another way to find a mate 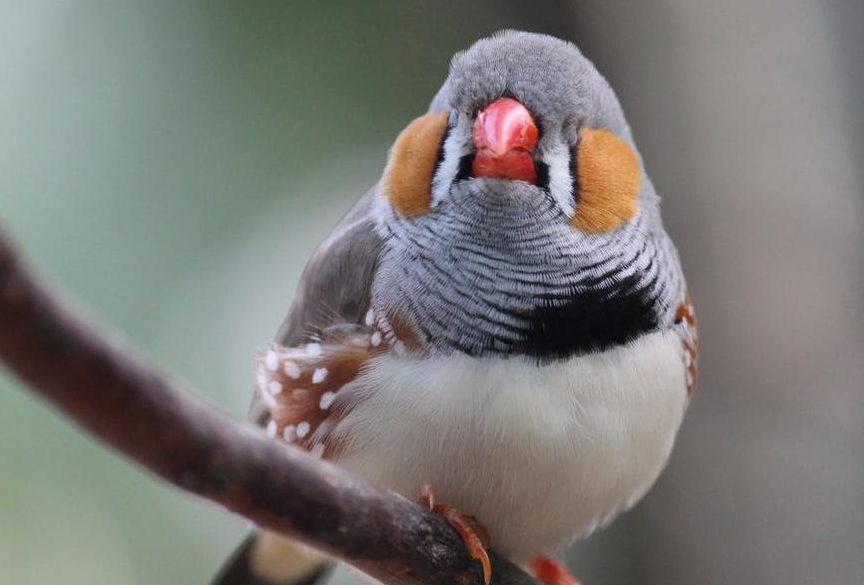 A song is not the only way to get a female’s attention. A zebra finch’s bright beak is also attractive to potential mates. (Credit: Mehran B | Pexels)

Next time you gush over the beauty of a bird’s song, consider that its rough translation is something like this:

“Hello, beautiful bird.
Look how complex my song is!
This is because I am a genetically superior male.

I’m taking some liberties here, but experts say male birds really do use songs to communicate romantic interest in females and aggression towards males (which also relates to wooing females). But before a singing bird can compete for attention, it must learn and rehearse its melody. So how do birds learn their songs?

The zebra finch, Taeniopygia guttata, a tiny bird with a bright orange pointy beak and zebra-like stripes on its chest, is one of the most studied bird species, partly because it breeds easily in captivity and also because its song is simple to analyze. Scientists have uncovered a lot about how male zebra finches learn to sing, a skill crucial to finding feathery love.

One such discovery is the balance of nature and nurture in zebra finches’ song learning. On the one hand, these birds have specific areas in the brain that make song learning possible, and on the other hand, help from a tutor is necessary to learn a “normal” song.

“Historically people thought that song learning is not very social. They thought that birds just imitate — some birds can imitate even playbacks of recorders. But when people started working on zebra finches, they realized that imitation doesn’t work so well,” says Ofer Tchernichovski, a researcher in the department of psychology at Hunter College in New York City. “One of the reasons is because zebra finches are very social.”

Zebra finches mature fast and unlike some other bird species, once they learn their song, it remains practically unchanged for the five- to seven-year lifespan.

Song learning happens during the first 25 to 60 days of life, called the “sensitive period,” when young males listen and interact with their father, or, in an absence of their father, a male tutor. During this time, the young continuously listen to the tutor’s song, absorbing the sounds that they will eventually reproduce themselves.

Learning by imitation is crucial, and studies have shown that when young zebra finches learn in isolation — from recording devices, for example — without their parents, their songs are abnormal, with fewer notes and longer note durations. Abnormal songs, in turn, might scare off females.

The quality of a tutor affects the student’s song, too, and birds with fathers who prefer to spend time socializing with others rather than interacting with their sons had worse learning outcomes.

“If the father is super gregarious and has lots of associations with others, then the son will produce a worse copy of the song,” says Neeltje Boogert, a behavioral researcher at the University of Exeter in the UK and a co-author of the study on father and son interactions in birds.

It remains unclear which factors in these interactions are most conducive to learning. Boogert speculates that physical proximity is important in the noisy environment of a bird colony.

But it is not enough for a young finch to merely listen to a song; he needs to practice it, too. In zebra finches, the rehearsal period begins 30 days after birth, earlier than in many other bird species. At first, the emerging song from a young male is quiet, unstable and does not resemble the tutor’s song. But the tutoring has not gone to waste: The tutor’s song is a template, and the young bird continuously listens to his own song and adjusts it to match this memorized template.

How does that happen?

Researchers have identified a special center in the avian brain called the HVC, or high vocal center, which has many neurons coming in and leaving it. Research has shown that during the period of song learning new neurons are formed in the HVC, implying that the song becomes imprinted into the male brain, until the birds can produce a beautiful crystallized melody, like a sculpture painstakingly carved out of marble.

Nature comes into play at least one more during song learning, as hormones also influence the process.

Testosterone, an important male sex hormone, acts as a supervisor for timely learning.  Castrated birds don’t have testosterone and can’t sing, while birds that are given testosterone before their rehearsal period will not reproduce a song learned from a tutor. Researchers think that injected testosterone speeds up male birds’ maturation, thereby shortening the time they have to rehearse —  you can think of it as somebody forcing you to perform on stage before you’ve memorized your lines.

The final version of the male’s song crystallizes by day 90. It is not an exact copy of the tutor’s song, but a variation of it.

“What we call perfect imitation is not that common. There is a sweet spot between total imitation and total chaos,” Tchernichovski says.

It makes sense why some variability is desired: For birds, a newly learned song is both a signal of belonging to your species and a way to distinguish yourself from others.

As young males learn their song correctly, females begin to listen for that one perfect melody. But just like with homo sapiens, female desire is complicated.

“It’s quite hard to know what females like, but in general it is thought that longer and more complex songs are preferred,” Boogert says. “Other people think that a song is more like a signature; perhaps the bird is singing “I’m John, I’m John, I’m John.” In that case, complexity wouldn’t matter.

Once a couple is formed, zebra finches usually stay together for life, so it’s important that males create an impressive song to find the best possible mate .

In the game of love, it seems, female birds are willing to bet their happiness on a good song. But really, can you blame them?