How to die from toxic algal blooms

Toxic algal blooms tend to stay underwater, so when a particularly powerful bloom killed an air-breathing human, it shocked the world.

A young oyster farmer died on the shores of Brittany, France after inhaling the toxic gas produced from a large algal bloom. That death resulted from a series of different unfortunate events stemming from pollution, bacteria, and far too much of a good thing.

If you, too, want to know how to die from a toxic algae bloom, read the first ever comic published on Scienceline created by MK Manoylov. 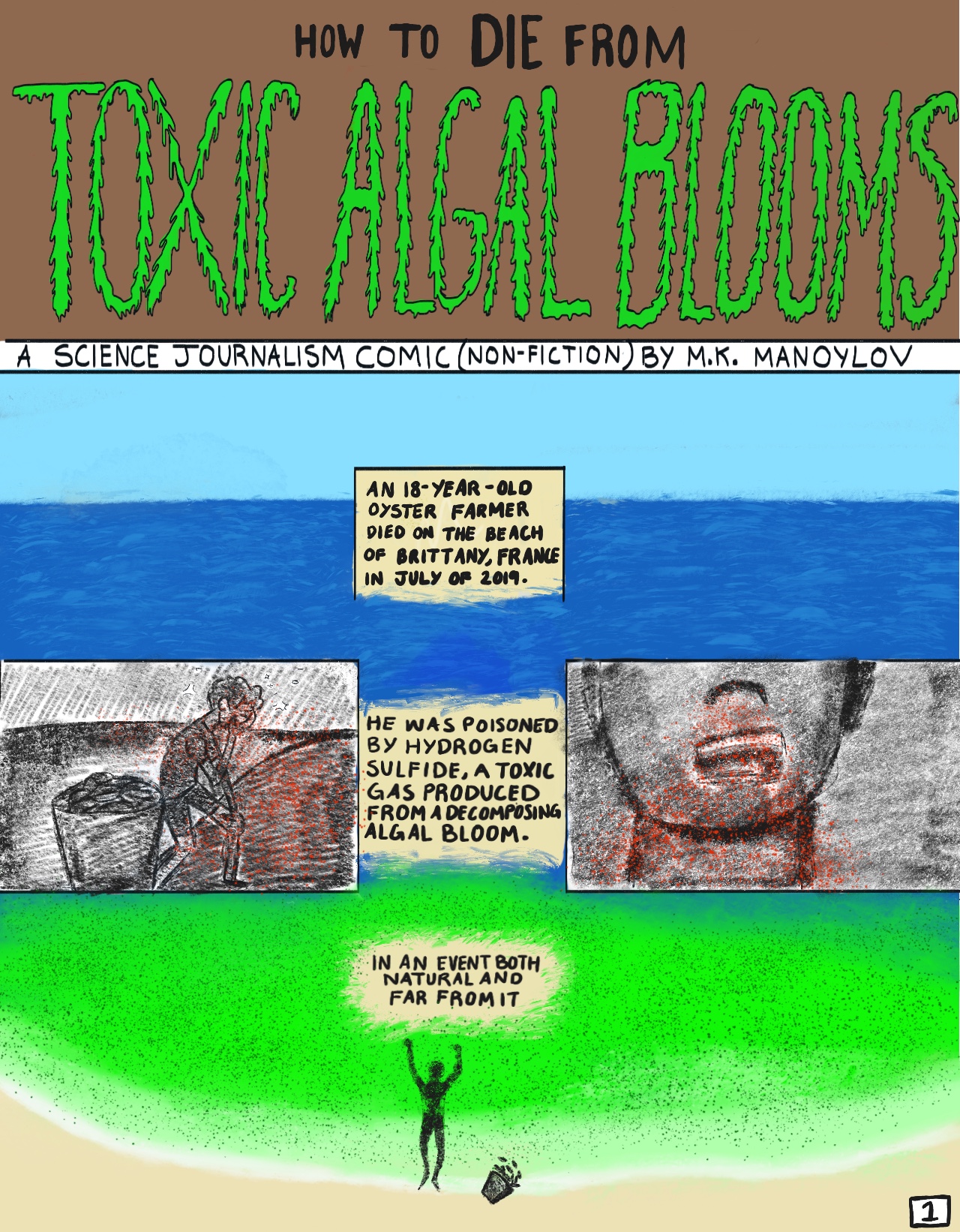 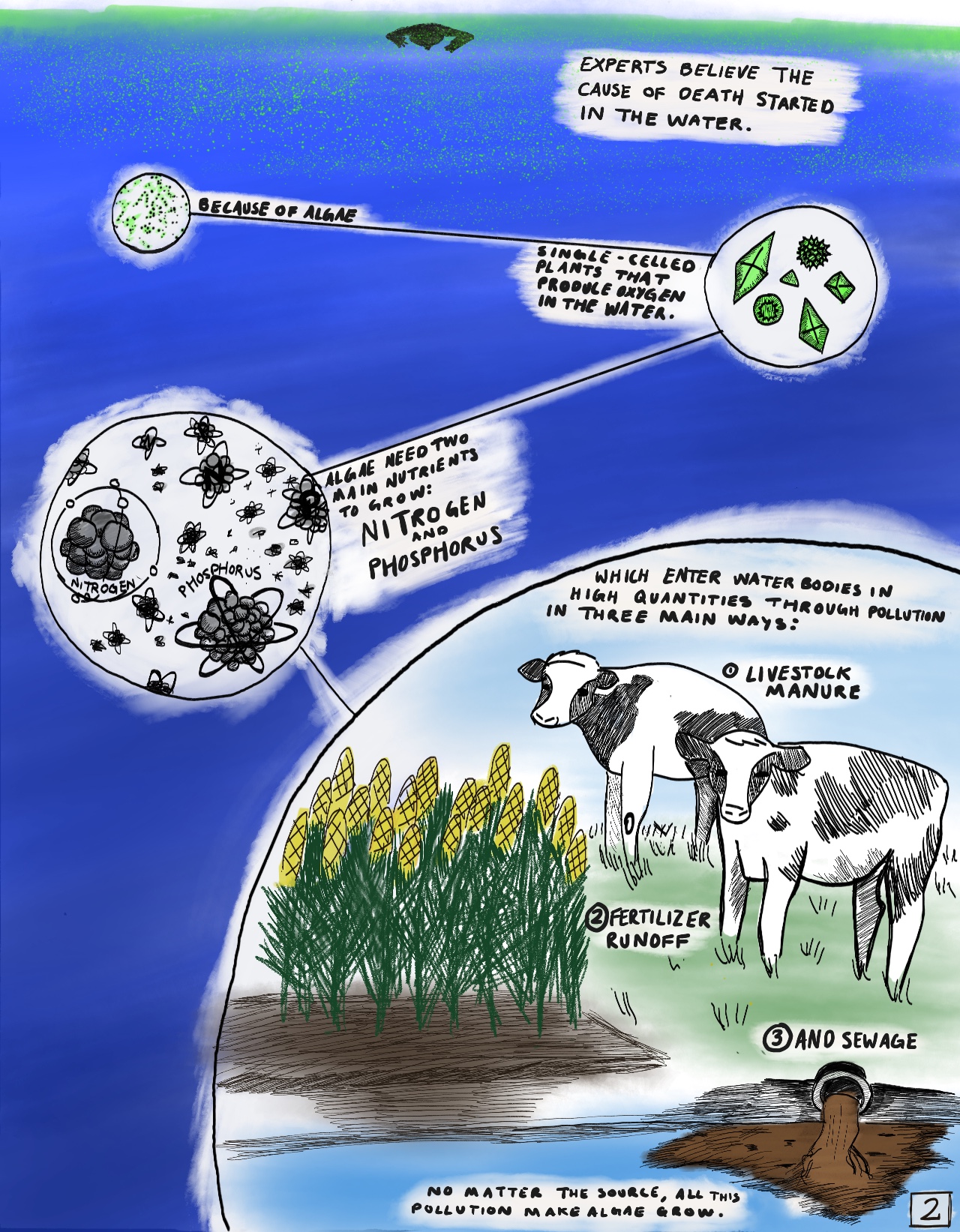 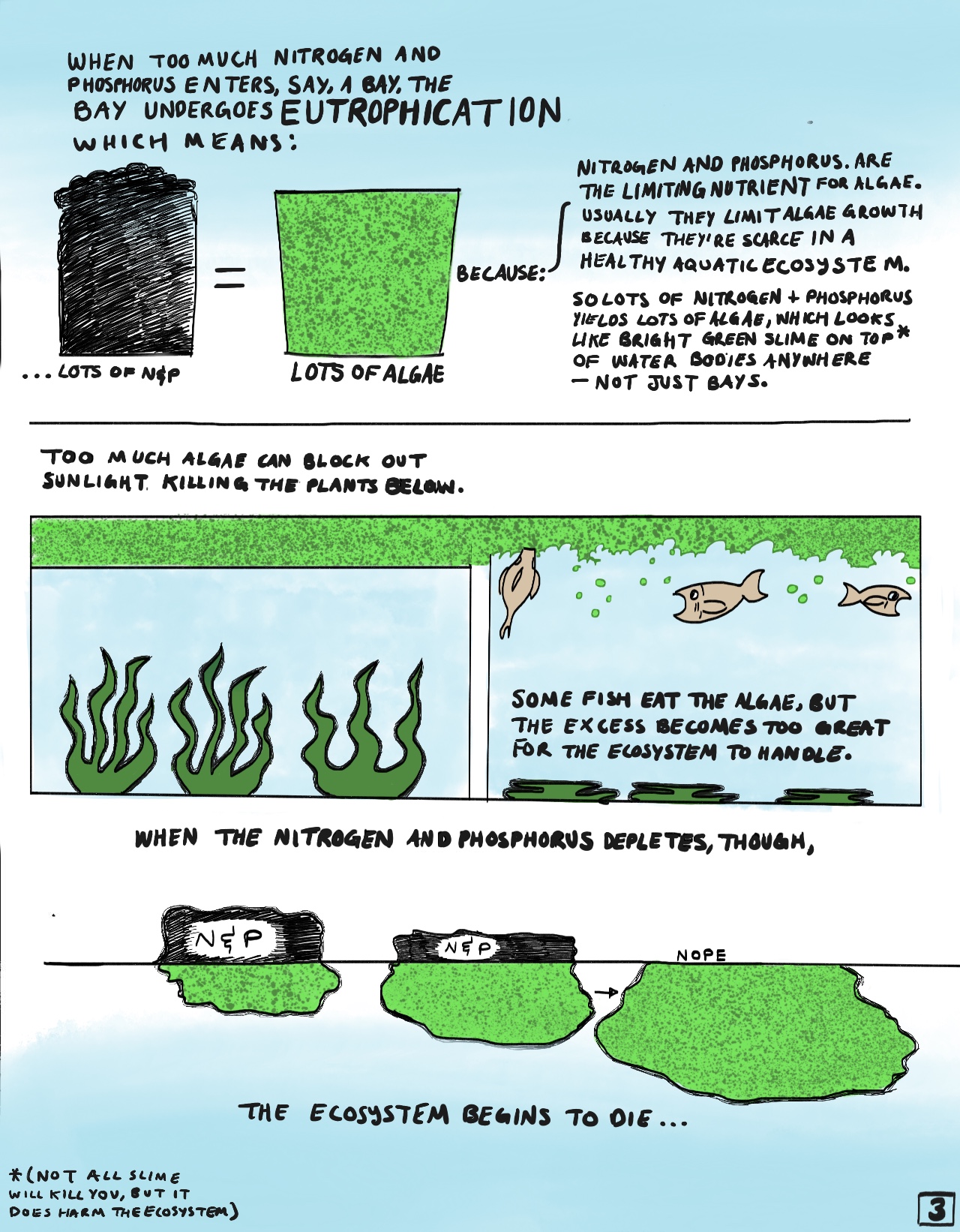 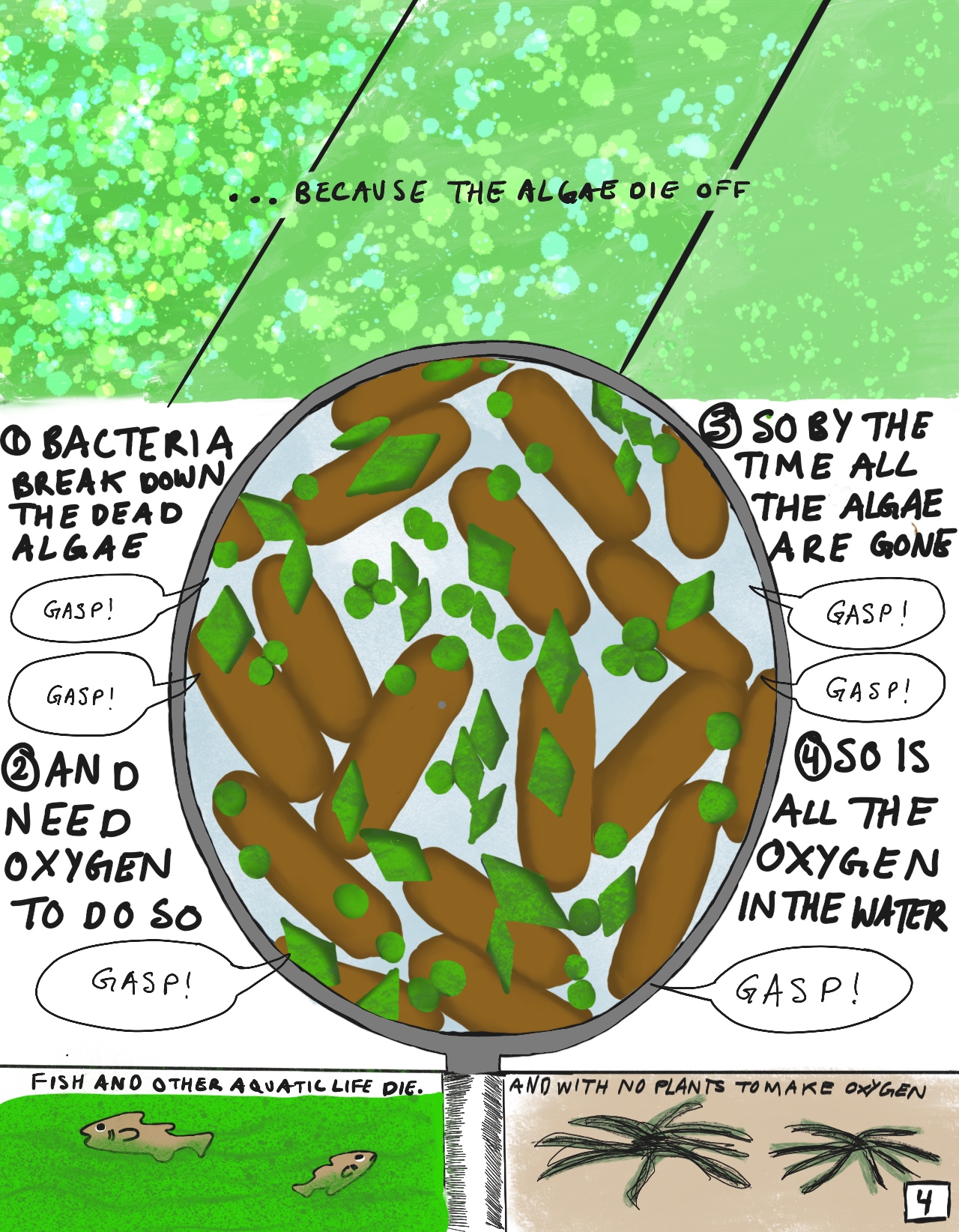 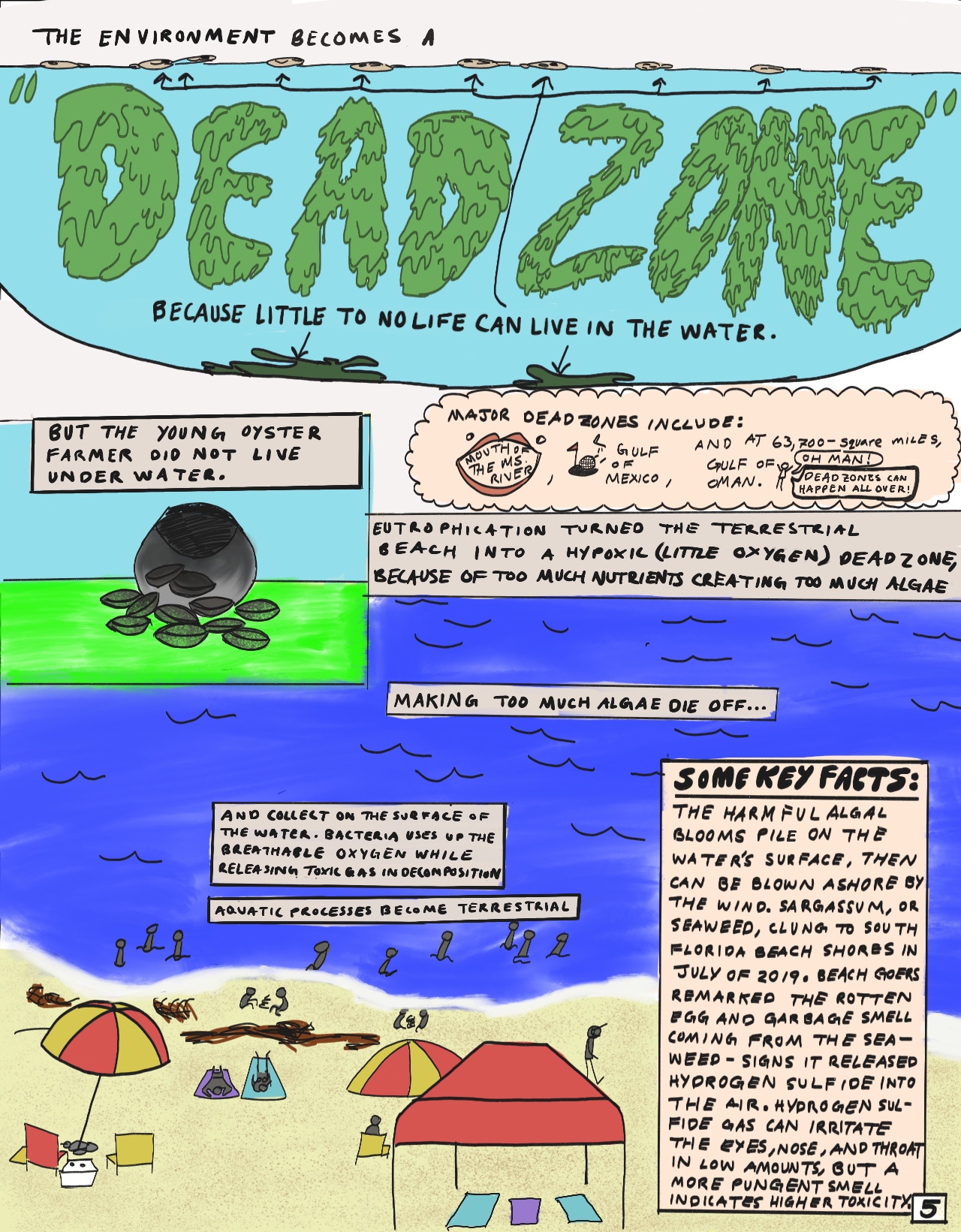 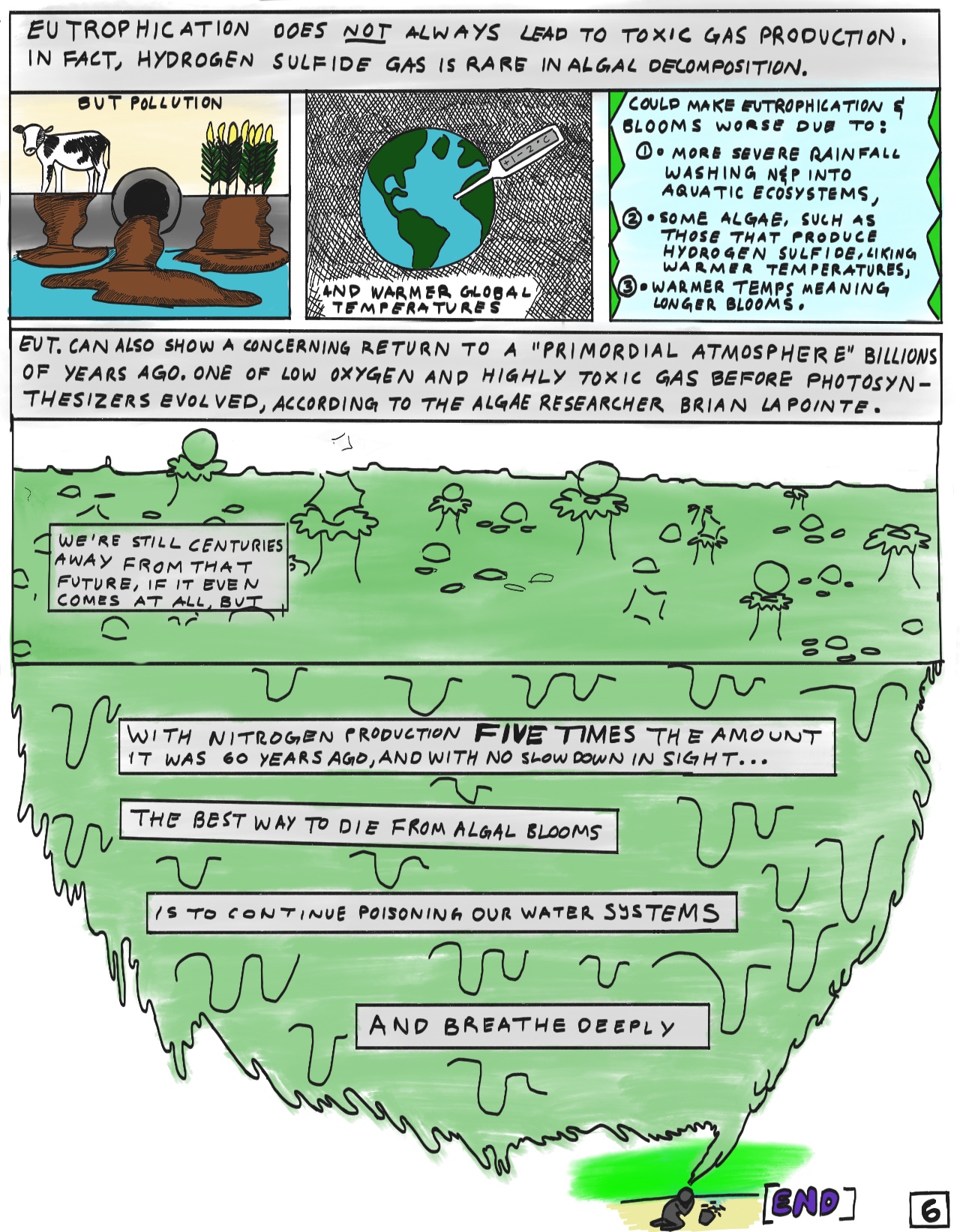 How to Die from Toxic Algal Blooms
A Science Journalism Comic (Non-Fiction) by M.K. Manoylov

(Illustration of beach). An 18-year-old oyster farmer died on the beach of Brittany, France in July of 2019.

(Illustration of oyster farmer). He was poisoned by hydrogen sulfide, a toxic gas produced from decomposing algal bloom.

(Illustration of dead farmer). In an event both natural and far from it.

(Illustration of algae zoomed in). Experts believe the cause of death started in the water.

(Illustration of algae zoomed in further). Because of algae.

(Illustration of nitrogen and phosphorus). Single-celled plants that produce oxygen in the water. Algae needs two main nutrients to grow: Nitrogen and Phosphorus.

No matter the source, all this pollution make algae grow.

When too much nitrogen and phosphorus enters, say, a bay, the bay undergoes eutrophication which means:

Because: Nitrogen and phosphorus are the limiting nutrient for algae. Usually they limit algae growth because they’re scarce in a healthy aquatic ecosystem. So lots of nitrogen + phosphorus yields lots of algae, which looks like bright green slime on top* of water bodies anywhere – not just bays.

Too much algae can block out sunlight, killing the plants below.

(Illustration of fish). Some fish eat the algae, but the excess becomes too great for the ecosystem to handle.

(Illustration of depleting N&P). When the nitrogen and phosphorus depletes, though, the ecosystem begins to die…

* (Not all slime will kill you, but it does harm the ecosystem)

…because the algae die off.

(Illustration of dying fish). Fish and other aquatic life die

(Illustration of dying plants). And with no plants to make oxygen.

The environment becomes a “dead zone.” Because little to no life can life in the water.

Major dead zones include: Mouth of the Ms. River, Gulf of Mexico, and at 63,700 square miles, Gulf of Oman.

(Illustration of stick person saying: “Oh man! Dead zones can happen all over!”)

(Illustration of oyster). But the young oyster farmer did not live under water.

Eutrophication turned the terrestrial beach into a hypoxic (little oxygen) deadzone, because of too much nutrients creating too much algae.

(Illustration of beach). Making too much algae die off…

And collect on the surface of the water. Bacteria uses up the breathable oxygen while releasing toxic gas in decomposition. Aquatic processes become terrestrial.

Some key facts: The harmful algal blooms pile on the water’s surface, then can be blown ashore by the wind. Sargassum, or seaweed, clung to south Florida beach shores in July of 2019. Beach goers remarked the rotten egg and garbage smell coming from the seaweed – signs it released hydrogen sulfide into the air. Hydrogen sulfide gas can irritate the eyes, nose, and throat in low amounts, but a more pungent smell indicates higher toxicity.

Eutrophication does not always lead to toxic gas production. In fact, hydrogen sulfide gas is rare in algal decomposition.

(Illustration of pollution into water). But pollution

(Illustration of Earth with thermometer). And warmer global temperatures

(Illustration of primordial). Eut. can also show a concerning return to a “primordial atmosphere” billions of years ago. One of low oxygen and highly toxic gas before photosynthesizers evolved, according to the algae researcher Brian Lapoint.

We’re still centuries away from that future, if it even comes at all, but

With nitrogen production five times the amount it was 60 years ago, and with no slow down in sight… The best way to die from algal blooms is to continue poisoning our water systems and breathing deeply.

So, how can I purchase the right to print this comic in large format for display? If it is not for purchase, how can I buy a license for display for educational purposes?