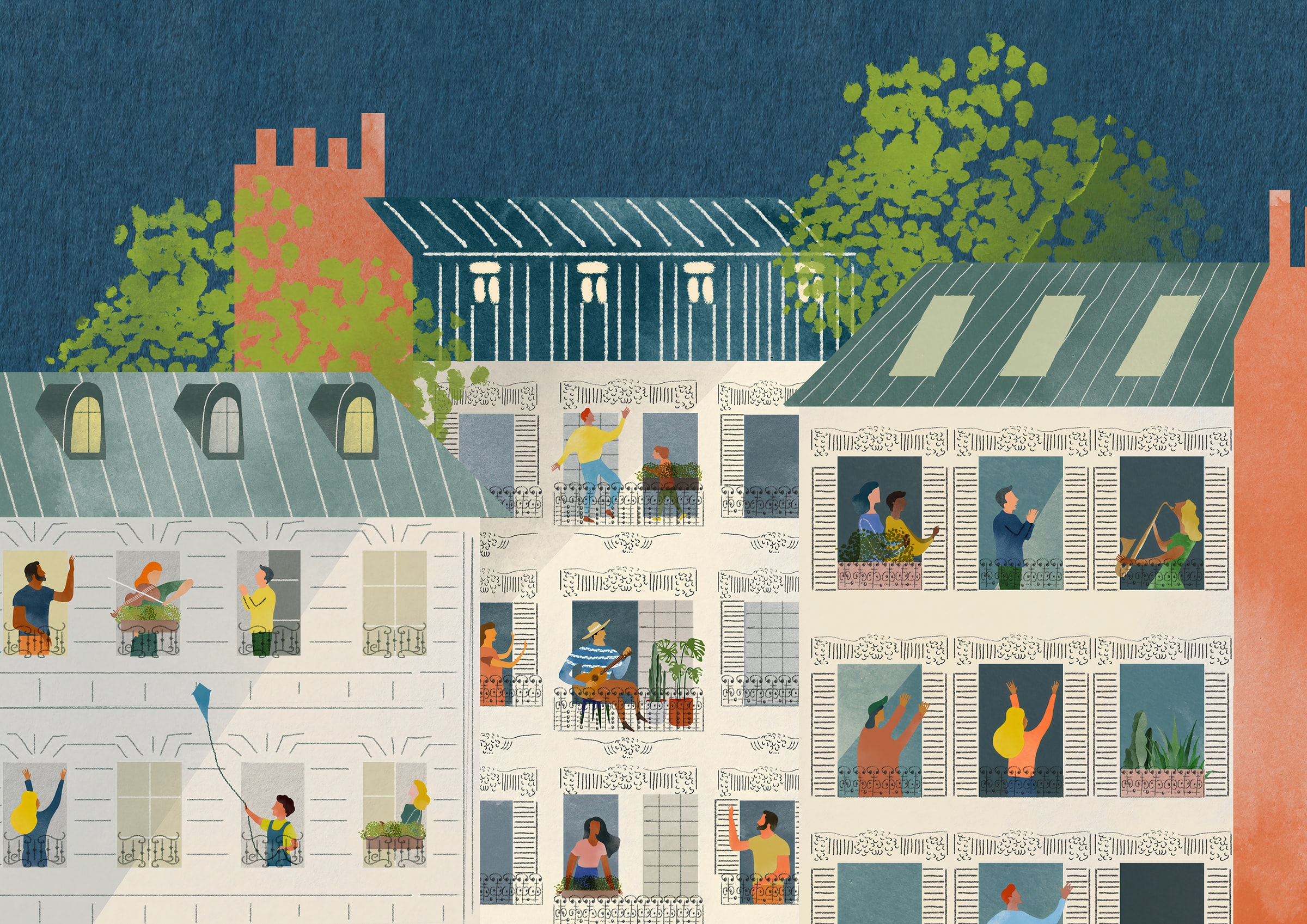 During the pandemic, confined to homes and small apartments, some people rekindled old interests; they started working on a book, or learned an instrument. A cancer researcher in Sydney, Australia used his background in music to create compelling sounds from the coronavirus genome. [Credit: Unsplash, United Nations]

In the 1980s, Mark Temple was the drummer for the indie pop band The Hummingbirds. He toured the world and saw his music played on MTV, but eventually left the band and returned to school.

When the university where he teaches shut down earlier this year, Temple used his time at home to rekindle his pastime: He turned the coronavirus genome into music. Each genetic letter contained within SARS-CoV-2, the virus that causes COVID-19, was converted into a musical note, bass line or drum beat. The resulting composition, which is more than an hour long, sounds a bit like ambient electronica; it is surprisingly beautiful. But will people want to listen to music that reminds them of the pain and suffering of these last nine months?

Combining interviews with musicians and researchers in Sydney, Australia, this episode of the Scienceline podcast deconstructs the story of Mark Temple, and his quest to make music out of a global crisis. Guests include: Dr. Mark Temple, a senior lecturer at Western Sydney University, and Mike Anderson, an Australian guitarist who collaborated with Temple for live performances of the coronavirus music.

This story was reported, edited and produced by Niko McCarty, with additional contributions by Ethan Freedman.

Niko McCarty: Last spring, universities around the world started to shut down because of the coronavirus. Students moved to online courses. Scientists sat at home, dreaming about experiments. And one cancer researcher in Sydney, Australia used his time at home to pursue a musical hobby.

Niko McCarty: Mark studies cancer cells: how they appear in the body, and how to fight them. He has white, messy hair and as we talk on Zoom, I notice two electric guitars hanging on the wall behind him.

Mark Temple: Prior to my adult career, I was a musician.

Niko McCarty: In his free time at home, Mark has been researching DNA sonification. And don’t worry — I had no idea what that was either.

Mark Temple: I guess there’s lots of interpretations or definitions of sonification. I think of it as using audio to tell you about a process, to inform you about data.

Niko McCarty: It turns out that sonification is just about turning data into music, and any data will work. Even genetic data, the same stuff that 23andMe analyzes when you spit in a tube and send in your sample, can be turned into music. So, Mark decided to sonify the thing on everybody’s mind.

Mark Temple: So I started working from home in, I think, February, March. I decided to sonify the coronavirus sequence.

Niko McCarty: The final song that Mark made is over an hour long. And to make it, he had to convert each letter in the coronavirus genome into a musical note. He also used other information from the coronavirus, like its three-dimensional structure, to create bass lines and drum beats. The result sounds really musical, but it’s also scientifically accurate. Every note, every sound, is generated from some part of the coronavirus.

Niko McCarty: For Mark, turning DNA into music is a process nearly 40 years in the making. In the 1980s, his life was very different.

Mark Temple: I was in a band called The Hummingbirds. We toured the world, we did all that kind of stuff. Our big album, if you want to call it our big album, the biggest album we made was called Love Buzz. It was top 20 in Australia. I remember being in a hotel room in New York actually, and seeing it on, umm, MTV. And I thought wow, we’ve made it you know, we’re on American TV and all of that sort of stuff.

Niko McCarty: But then Mark got older, he missed science and he went back to school. The band broke up. Mark still likes to jam with other musicians, though, so after he sonified the coronavirus, he shared that music with a Sydney guitarist.

Mike Anderson: My name is Mike Anderson. I’m a guitar player from Sydney, Australia. And I’ve recently been involved in the genome sonification project with Mark Temple.

Niko McCarty: When Mike listened to the coronavirus music, he was immediately inspired.

Mike Anderson: And it was, yeah, an interesting experience. I mean, this is when COVID was really kicking off. So, you know, I’ve never in my lifetime, never has a story dominated the news. It’s almost like World War stuff, you know, equivalent.

Niko McCarty: Mike pulled out his guitar, and started to play along.

Mike Anderson: (Laughs) That was a long — for a guitar player, that’s heaven, you know, solo for an hour. No worries.

Niko McCarty: For Mark and Mike, having fun playing music inspired by the coronavirus is a way for them to cope with our extraordinary new reality. But not everyone has felt at peace listening to Mark’s music.

Mark Temple: The responses have been pretty good actually. Occasionally, you’ll see some comments, which kind of indicate people don’t get it, that they’re not quite sure what you’ve done, or why you’ve done it. And it just seems a bit odd.

Niko McCarty: In a few months, Mark and Mike want to take their music, and perform it in front of a live audience. Of course, that will only be possible after we have a vaccine, and people feel safe gathering in groups again. But will they want to hear a piece of music that reminds them of the pandemic? For some, probably not. But for others, it could be a way to heal. Until then, there’s a lot of time to reflect.

Mark Temple: I feel a bit guilty that you know, something good is coming out of something so terrible. But I also feel good that other people listen to the audio. And in some instances, this then leads on to the actual, the science of what’s happening, and I think that’s quite useful, too.