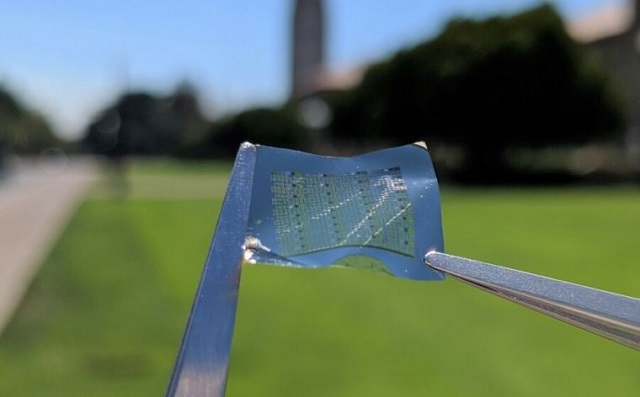 Clothing that can record a patient’s vital signs may be one of the first commercial applications of a flexible plastic memory chip developed at Stanford University. [Credit: Asir Intisar Khan and Alwin Daus]

Can you imagine wearing a shirt that tracks your physical condition without needing a bulky data recorder or even a smartphone?

Well, imagine no longer. Researchers have found a way to integrate an energy-efficient memory chip into fabric, bringing that technological fantasy into reality.

In a recent paper, researchers from Stanford University announced that they have produced a bendable memory chip that can store data using very little power.

Older versions of the memory chip — known as phase-change memory chips — are already widely used in small electronic gadgets, but are rigid and consume a lot of energy while operating, according to Eric Pop, an electrical engineer at Stanford and a co-author of the study. Now the Stanford team has managed to overcome those challenges by creating a new kind of memory chip that could spur the growth of electronic textiles, especially in the healthcare industry.

“We have taken this data storage one step further,” Pop says. He added that the storage chips can be used in smart tags that monitor the nutrition and temperature of food as well as in wearable and even implantable computers.

Pop says using the right material is key. The Stanford team fabricated the memory chip on a sheet of flexible plastic instead of using a traditional chip’s three traditional metallic ingredients: germanium, antimony and telluride. The flexible plastic helps with energy efficiency because its low thermal conductivity traps heat within the device, says Stanford’s Asir Intisar Khan, the co-first author of the paper.

The biggest hurdles now, say Pop and Khan, are making the chips more durable and bringing down the cost of integrating them into conventional clothing materials like cotton and wool.

While using plastic is cheaper than metal, the costs of mass production may be much higher. For now, Pop says, “this is just an academic demo.” Costs will come down “if the … industry puts their fabrication resources behind it,” he adds. Neither has happened yet.

But if that mass-production day comes, the Stanford team predicts that the first practical applications for the chip may be in healthcare. There are already electronic garments on the market that can monitor physical activity and vital signs. Montreal-based Hexoskin, for example, makes shirts outfitted with sensors to measure lung and heart activity. The shirt sends the data to a Walkman-sized data recorder that stores, processes and transmits data to an application on a tablet or smartphone, says Marc Paquin, the company’s vice president of strategic development.

The Stanford team’s new chip, combined with a bendable microprocessor developed by a group of researchers in the U.K., might allow Hexoskin to get rid of the data recorder. The flexible chips can be installed directly on the shirt and both process and store the data right away. Paquin declined to comment on the prospects for such technology in the company’s products.

For smart clothes to be more than a niche market though, says Muhammad Mustafa Hussain, an electrical engineer at the University of California, Berkeley, who was not involved in the chip’s development, the idea will have to win the support of major tech and apparel companies.

“There’s a lot more attention on increasing the number of utilities on the existing electronics,” Hussain says. Big companies “are not investing in the risky bets. I wonder if they even need [flexible electronics] today.”

While he’s skeptical companies will use it, Hussain nevertheless considers the flexible low-power memory chip to be a breakthrough in the field.

The Stanford team agrees. “It’s always good to have options for data storage,” Pop says. “Whether it’s going to be used in flexible electronics or rigid electronics maybe as part of smart food monitoring, we don’t necessarily know. But it’s nice to have options.”