Rising temperatures and development threaten Earth’s peat; without it, our climate would warm even faster 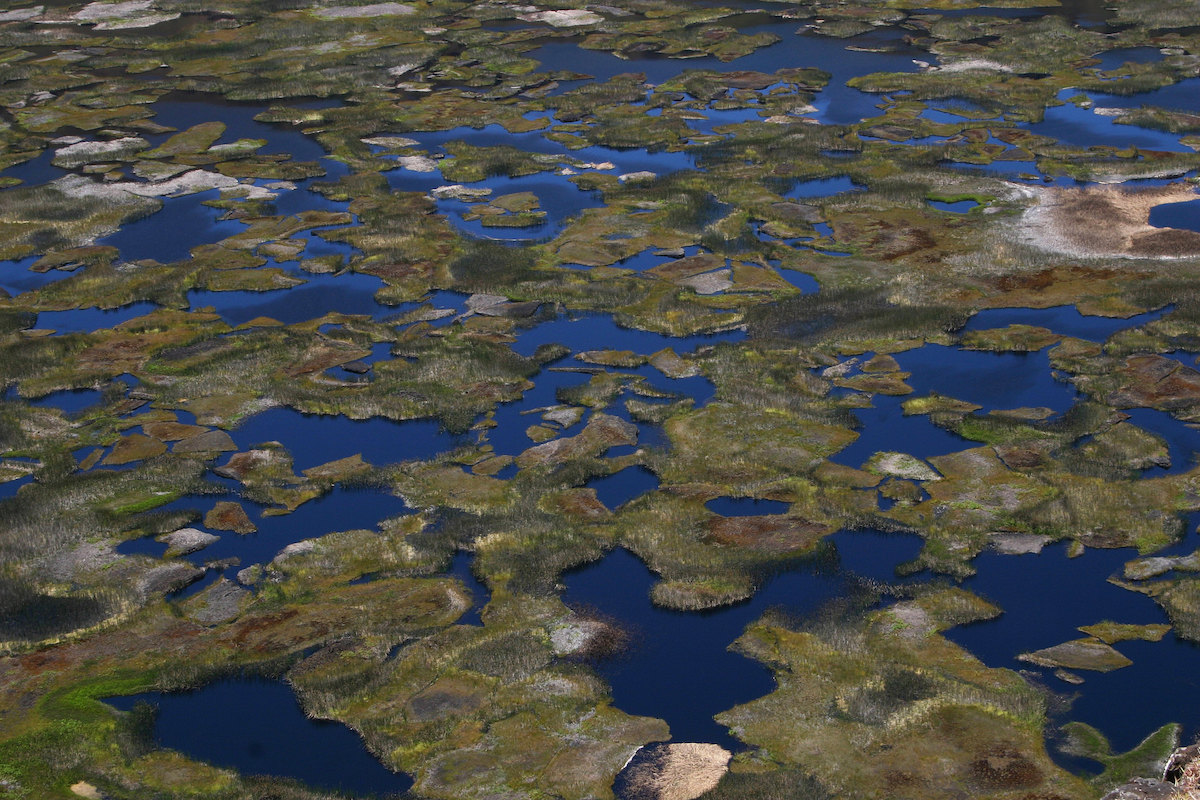 The sphagnum moss that makes up a peat bog allows it to hold more carbon than any other ecosystem. [Mike Seager Thomas | CC BY-NC-ND 2.0]

A walk in a peat bog

The ground beneath your feet squishes and bounces as you walk, holding you up with water-saturated moss. Below you, layered up to 65 feet deep in the ground, lies one of Earth’s greatest treasures: peat.

Dig into this soil and you smell a rich, earthy aroma; the scent of a land where water and earth become one.

You might know peatlands as bogs, fens, marshes, estuaries or mudflats — all those landscapes defined by water and thick plant life. These swampy lands play a crucial role in balancing Earth’s atmosphere by storing carbon. One square meter of unassuming peatland can hold five times more carbon than the soil of a tropical rainforest.

Today, this land is under threat from fires, rising temperatures and development.

No landscape holds more danger and yet more promise for our warming climate.

Peat by the numbers

Peatlands make up 3% of Earth’s surface.

16% of those peatlands are damaged from draining.

What makes a peat bog?

Of all peatland types, peat bogs store the most carbon. They have just two principal ingredients: moss and a lot of water, says Dorothy Peteet, a paleoclimatologist at NASA and Columbia University.

“Sphagnum moss is one of the biggest components, sort of a keystone species for bogs,” she says.

The mosses grow in dense mats across a bog, relying on cold and wet conditions.

In a healthy peat bog, sphagnum moss is constantly growing and burying older moss. The conditions of the bog are prime for retaining all the chemical components of dead moss, even as it turns into soil, says Peteet.

The water trapped within a peat bog’s mat of moss doesn’t flow like a river or lake, creating a low oxygen level in the bog. When bacteria and fungi break down the moss, they release acid that remains in the surrounding water. Low oxygen and high acid conditions mean that dead mosses can’t decompose as new moss grows on top.

As dead moss sinks deeper into the bog, its organic compounds sink with it and the plants retain nearly all their carbon instead of returning it to the atmosphere.

Beneath the sphagnum moss mat and layers of dead moss is the peat: the organic soil which holds most of the bog’s carbon.

Collecting all that carbon can take thousands of years, but as moss slowly grows and sinks into peat, a peatland becomes a massive carbon storage zone.

Each year peatlands across the world store 307 megatons of carbon, which is “more carbon than all other vegetation types in the world combined,” according to the International Union for the Conservation of Nature.

Peat bogs aren’t the only type of peatland, though their sphagnum moss makes them capable of holding larger amounts of carbon. Depending on who you ask, any soil with more than 20% to 30% organic matter can be called peat. These kinds of peatlands without sphagnum moss occur in wet areas around the world, from Alaska to Indonesia.

The death of peatlands

The thousands of years required to form a peatland means that once it’s gone, it’s gone for good — and all the stored carbon reenters the atmosphere. Peat’s slow-growing nature can make it difficult to restore, says Peteet. Today, even in remote places, some of Earth’s peatlands are slipping away.

In tropical regions, many peatlands are converted to agricultural lands, often to produce palm oil, which means draining the wetlands and drastically reducing their carbon storage capabilities. In Malaysia and Indonesia, this conversion process accounts for up to 30% of the countries’ total greenhouse gas emissions.

Meanwhile, just below the Arctic Circle where many peatlands are found, temperatures are rising two times faster than the global average. “We’ve seen places burn that we never saw burn before,” says Peteet. She explains that warmer temperatures melt permafrost and dry out peatlands, leaving prime conditions for fires.

The slow-moving and smoldering nature of peat fires has earned them the nickname zombie fires, and they can persist even in the most inhospitable conditions. In January 2021, for instance, peat fires burned in Yakutia, Russia despite staggeringly cold temperatures as low as 58 F below zero.

One of the world’s largest peatlands lies on Omushkego ancestral lands in Northern Ontario, Canada. This land is under threat from rising temperatures and a proposed mining project. The Mushkegowuk Council, which represents eight member nations, has a bold plan for protecting this place with an Indigenous-led marine conservation area.

“When you fly over that area it’s this huge peatland … and it’s all wet and it looks beautiful, it looks like a big massive lung that’s just laying out on top of the Earth,” says Lawrence Martin, Mushkegowuk Marine regional manager.

Under the peatlands’ surface could lie valuable mineral deposits of chromium, nickel, platinum and copper — all of which are crucial in the development of renewable energy. The Ring of Fire mining project proposed by Norton Resources Ltd. would be situated in the heart of these peatlands, and would affect their ecological integrity, says Martin.

While the Mushkegowuk Council doesn’t fully oppose the mining project, it is urging careful consideration of the environmental impacts. In January 2021, the Council urged a moratorium on development until a full environmental assessment is completed. For now, the project remains in planning stages.

Tribal elders are well aware of the outsized role peatlands play not only in supporting local livelihoods but also in keeping carbon out of the atmosphere. This is why the elders refer to the peatlands as “the breathing lands of the Earth,” Martin says.

An organized effort to collect traditional ecological knowledge and scientific research will soon be underway. In August 2021, the council signed an agreement with Parks Canada to conduct a baseline study of how best to protect the marine area and adjacent peatlands.

Martin sees the impacts of a warming climate firsthand. He has noticed changes in bird migration patterns, increases in permafrost melting that threaten the peatlands’ integrity and even the introduction of raccoons, who can now tolerate the region’s warmer temperatures.

For the peatlands and the marine ecosystem, Martin says the goal is to “keep this place pristine, [make] sure it keeps doing its job for us in order for us to be able to continue our life on Earth and for life itself to continue.”

What our species calls “progress and development” equates to destruction and death to the natural world. The constant evaluation of the Earth in monetary terms is a false, and ultimately fatally flawed philosophy. Yet, those who oppose it are characterized as “tree huggers,” or “eco-fanatics,” and disparaged by the well-funded corporate narrative preaching our species’ manifest destiny to develop and commercialize the planet’s resources to “their highest and best use.”
How is it that the Earth existed for hundreds of millions of years as a well functioning, complex ecosystem with out the interference of human beings? Yet, within a virtual handful of centuries we have greedily — and out of harmony with the planet that sustains us — “progressed and developed” the pathway that is increasingly leading to our own destruction. When we are gone, not long from now geologically at our present rate, the planet will have Billions of years to recover, heal its scars, and orbit peacefully, waiting for our nearest star to embrace it in its fiery grasp.
Perhaps the significance of distances measured in light years hasn’t been internalized by our so-called “leaders.” If it had, they would realize that Earth is the only place in the expanding universe where our species can live and breath and exist. Earth, as Carl Sagan described it, from Voyager’s billion mile distant photo as it left the solar system, is but “a mote of dust suspended in a sunbeam.” It is where we must live, because there is no other alternative. We cannot escape and we cannot continue to destroy the very system that permits us to live. The ultimate legacy of “progress and development” as we are pursing it, is death to our species.