I’ve heard dogs can detect cancer just from sniffing someone’s breath. How is that possible? 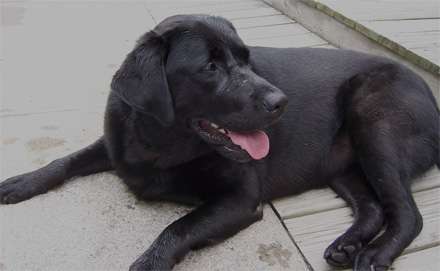 Everybody knows dogs have a keen sense of smell. Bloodhounds, for example, reportedly have an olfactory system that is ten million times more sensitive than humans’. This sniffer sensitivity is being put to work by oncology researchers: they’ve found that dogs can actually smell certain types of cancer.

In fact, studies indicate that dogs are often more accurate cancer-detectors than current diagnostic tests like chest X-rays and mammograms. In a study published last spring in the journal Integrative Cancer Therapies, cancer-sniffing dogs identified lung cancer samples correctly 99 percent of the time. But how are they able to identify cancer through smell?

It turns out researchers have known for years that the breath and urine of cancer patients are chemically different from the breath of healthy people. Studies using gas chromatography, a laboratory technique that separates out the components of a gaseous mixture, have shown high levels of organic compounds such as alkanes, aromatic compounds, and benzene derivatives are present in cancer patients’ breath.

Experts believe the alkanes and other compounds are increased in cancer patients because of oxidative stress, a biochemical process that occurs in dying cells. Increased oxidative stress forces cells to speed-up their metabolism, which leads to increased metabolism byproducts, like the alkanes. Though nothing has been proven, the current consensus is that it is these compounds the dogs are able to identify through smell — an olfactory feat that may be hard for most humans to imagine.

The recent studies suggest regular “household” dogs can be trained to detect cancer in urine and breath samples in just a few weeks. Dog trainers use positive reinforcement to teach the dogs to recognize the cancerous samples. In studies that use breath samples, researchers have subjects exhale deeply into small plastic tubes, which are then sealed and placed in perforated canisters; this allows the dogs to smell the samples without contaminating them. The dogs are faced with several canisters at one time and must lie down in front of the one they think contains the cancerous sample, getting a treat if they choose the correct one.

The next step for researchers will be to establish what chemicals the dogs use to identify cancer and then to develop ways to mimic the dogs’ detection abilities with technology. Progress is already being made with a device known as the electronic nose that, up until recently, has been used mainly for monitoring toxins in food and the environment. Indeed, in 2003 a group at the University of Rome created an electronic nose that was 92 percent accurate at detecting lung cancer. The results were published in the journal Biosensors and Bioelectronics.

Researchers believe both doctors and patients would stand to benefit from a cancer-detecting electronic nose: the technology is easy to use, relatively inexpensive, and non-invasive. Physicians would be unlikely to diagnose patients based on the electronic nose results. Instead, the electronic nose could be used as a gauge for determining which patients required additional testing.

The potential of this breathalyzer-like technology may extend to other diseases, too. Some researchers have suggested that the breath of patients with AIDS, diabetes, and possibly even mental illness could contain unique chemical markers. Whether dogs can sniff out any diseases besides cancer has not yet been studied, though claims by patients that their dogs can predict everything from heart attacks to epilepsy abound.

Perhaps one day we will understand how dogs interpret what they smell. Until then, all we can do is wonder if maybe our pets know more about our health than we do.

This article is poorly researched and written up for something purporting to be science reporting.

There is no scientific study I know of that has measured the bloodhound’s olfactory ability. The best most recent study in canine olfaction, from FSU, found pet dogs able to detect a particular chemical, n-amyl acetate, at dilutions of between 1 and 2 parts per trillion. Very impressive – but that’s between 10,000 and 100,000 better than humans – not “10 millions times better”.

Studies, although promising, have not shown that dogs are better than conventional diagnostic techniques. In the preliminary study you refer to published in Integrative Cancer Therapies, the cancer patients taking part in the trial had already been diagnosed, making it difficult to compare statistically with the success rates of conventional techniques where of course the patients don’t know they have cancer beforehand. It is possible, for instance, that knowing you have cancer alters the chemicals in your breath in a way that a dog could detect. Much more work needs to be done before you can state categorically that dogs can, indeed, smell cancer.

The lung cancer detected by the electronic nose used in Rome was at a very advanced stage. The chemicals it detected are not detectable by an e-nose in early-stage cancer where of course it would be most useful.

So to sum up,there is nothing truly conclusive yet to say dogs can smell cancer – but it is undoubtedly an area worthy of further research.

Even if TRUE-I would like to see a test that could Detect Glioblastoma (the Deadliest Brain Cancer) Ovarian Cancer in Women, or the Right Upper Quadrant malignancies (Liver, Pancreas and Gall Bladder) that are SO Deadly and don’t produce symptoms early in their course. Perhaps the Dogs could be trained to sniff the blood plasma-those chemicals may be more concentrated there. The alkenes could Also be extracted into an Ether layer, and the ether evaporated. Then-all you have left is lipids (fats) and the telltale organic chemicals form the cancer cells.