Why Do We Have Wisdom Teeth? 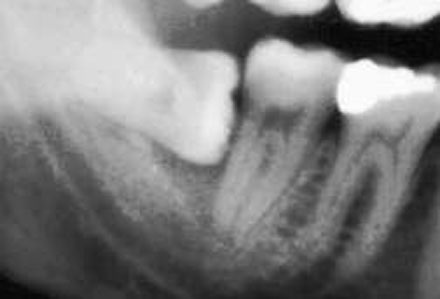 Not just a year ago my wisdom was tucked tightly away in my mouth, just below the surface of my gums, bothering no one. And then, last fall, it decided to emerge in the shape of three large, impacted teeth that had to come out. As I lay under the dental surgeon’s tools over the holidays, slowly coming out of my anesthesia, I wondered to myself: where did these teeth come from?

Anthropologists believe wisdom teeth, or the third set of molars, were the evolutionary answer to our ancestor’s early diet of coarse, rough food – like leaves, roots, nuts and meats – which required more chewing power and resulted in excessive wear of the teeth. The modern diet with its softer foods, along with marvels of modern technologies such as forks, spoons and knives, has made the need for wisdom teeth nonexistent. As a result, evolutionary biologists now classify wisdom teeth as vestigial organs, or body parts that have become functionless due to evolution.

Why do wisdom teeth wait to erupt long after the tooth fairy has stopped leaving change under your pillow? Tooth development, from baby primary teeth to permanent teeth, takes place in an organized fashion, over a course of years, with the first molar erupting around the age of six and the second molar erupting around the age of 12. Wisdom teeth, which begin forming around your tenth birthday, are the last set of molars on the tooth-development timeline, so they usually don’t erupt until you are between the ages of 17 and 25. Because this is the age that people are said to become wiser, the set of third molars has been nicknamed “wisdom teeth.”

Some people never get wisdom teeth, but for those who do, the number may be anywhere from one to four – and, on very rare occasions, more than four, according to a study published in the Journal of the Canadian Dental Association. Scientific literature has yet to be able to explain why the number of teeth per individual varies, but for those who do get these extraneous, or supernumerary, teeth, it can lead to all sorts of problems.

Because human jaws have become smaller throughout evolutionary history, when wisdom teeth form they often become impacted, or blocked, by the other teeth around them. Also, if the tooth partially erupts, food can get trapped in the gum tissue surrounding it, which can lead to bacteria growth and, possibly, a serious infection.

Wisdom teeth that do not erupt but remain tucked away can also lead to oral problems, such as crowding or displacement of permanent teeth. On very rare occasions, a cyst (fluid filled sac) can form in the soft tissue surrounding the impacted wisdom tooth. These cysts can lead to bone destruction, jaw expansion, or damage to the surrounding teeth. Even more uncommonly, tumors can develop in the cysts, which can lead to the jaw spontaneously breaking if the tumor or cyst grows too much.

There are patients that develop wisdom teeth that function just as well as every other tooth in the mouth, and as a result they do not need to go under the knife. But no one can predict when third molar complications will occur, and the American Association of Oral and Maxillofacial Surgeons estimates that about 85 percent of wisdom teeth will eventually need to be removed.

If you do have wisdom teeth that you are thinking of having taken out, the association strongly recommends that patients remove wisdom teeth when they are young adults, in order to “prevent future problems and to ensure optimal healing.” People who have oral surgery after the age of 35 have higher risks for complications, harder surgeries, and longer healing times than those who get them removed in their late teens or early 20’s. The best time to get those suckers out is when the roots are about two-thirds formed, which is generally between the ages of 15 to 18. Though I was…well, a lady never tells her age, but suffice it to say that for me, a weeks long lack of locution and a diet of soup and applesauce was worth no longer having pain in my jaw and food in my teeth.

So happy I read this. For a good cause I will say bad teeth have ruined my looks for now :) but reading this I know I have a little tooth fairy watching over
Me knowing I will need my wisdom teeth. I didn’t remove them when dentist told
Me. I read story’s people told how facial changes (I dislike sound of that completely) and needed them when older (
Makes sense) and 28 and I agree no teeth left
On top In front or in back on bottom but I know I’m doing what’s best for my fire teeth

I’m 55 years old and have all 4 of my wisdom teeth. I’ve not had any movement of my permanent teeth and the dentist has told me there is not issue with them. I suppose I have a larger cranium than most women (7 3/4 in), but I don’t believe that people should have their teeth pulled for not reason. A dentist told me in my 20s that I should have them removed. They were only partially in at that time. I’m so glad I did not!

I had mines out later. Two uppers when I was 30 & started hurting my lower ones. I was 42 when I had the lower left out due to abscess. I’m left with my lower right. Strange I didn’t have problems with them before. I discovered them on their way when I was 18 thru a pano X-ray. I was 19 when the first one erupted & 29 when the last one emerged.

Im 22 years old ..now im on the pick of getting pissed by this wisdom tooth .it always ache causing for me not to eat well.or never eat. The gums is always swollen and it irritates me evrytime looking at mirror . Where the cheecks are being hit by or get touched. But its nit impacted its just pains me evrytime the gums are swollen. Tell what to do?

Thanks for the insightful read!

I am a 63 YOF and just had my last wisdom tooth removed yesterday, it wasn’t bothering me at all but on X-ray showed it was too close to the nerve and as noted in the intro a cyst (fluid filled sac) had formed in the soft tissue surrounding the impacted wisdom tooth. “These cysts can lead to bone destruction, jaw expansion, or damage to the surrounding teeth. Even more uncommonly, tumors can develop in the cysts, which can lead to the jaw spontaneously breaking if the tumor or cyst grows too much.” My oral surgeon explained all of this to me and while I was nervous, extraction went well and I’m recovering with no pain and no discomfort except for some swelling. I’d rather have it removed now before something worse occurs. As someone else noted, get second opinions and a very good oral surgeon,