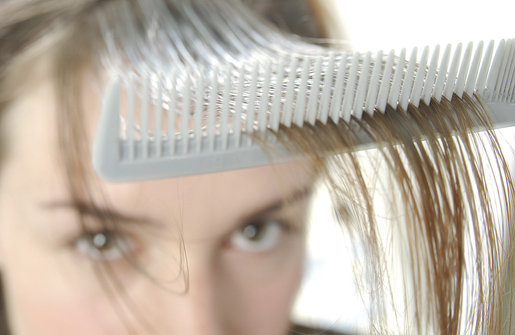 Gray hair can happen at any age--even in your teens or early twenties. [Credit: Abouthair.com]

Inuits live in very cold climates, why do they have dark skin?

To explain the mystery of graying hair, you must get to the root of the problem, err, I mean the root of your hair. Under the scalp, a tube of tissue called the hair follicle surrounds the root of every hair strand. Each follicle contains a number of pigment cells that produce melanin, the polymer that gives the growing shaft of hair its color. Usually these pigment cells continuously produce melanin, but if your body stops generating it, the strand of hair will have very little pigment to paint over it’s normally transparent hue; this base-transparency will then present itself as gray, white, or silver.

Melanin production is brought to a halt for a variety of reasons–some natural, some indicators of greater health issues. As people continue to get older, the number of pigment cells around to produce melanin will actually be reduced. Eventually, these cells will be so depleted, the hair will look completely gray. Incidentally, melanin also provides moisture to the hair strand, so when less is produced, hair tends to grow brittle, losing its bounce. This is why as your hair leans towards the color of the snowy peaks of the Alps, its texture becomes dryer and coarser, making it more curly or wiry.

My gray hair started when I was still in my teens—a far cry from the usual graying age range of 30 to 50. But it turns out that people can get gray hair at any age, depending on genetics. This means that most of us will start having gray hairs around the same age that our parents or grandparents first did. I called my mother to find out our family’s graying hairstory. She told me it wasn’t any surprise that I had started to gray at a young age—her uncle’s hair was completely white by the time he was 25. Aha! I thought. Now this mystery is starting to make sense.

Researchers have shown that gender plays a role in graying. The average male starts to gray around age 30, while women typically began to notice lighter strands around age 35. In some families, many members develop white hair in their 20s. “It obviously clusters in families in one sense. Whether that is a single gene or common gene we don’t know,” writes Dr. Meyer in the magazine Scientific American. “Generally speaking, among Caucasians, 50% are 50% gray by age 50. There is, however, wide variation. This number differs for other ethnic groups, again demonstrating the effect of genetics.” But this biological fact of life varies greatly from person to person, which made dermatologists and geneticists conclude that age is not the the only indicator of when gray hair will appear.

For starters, smoking is known to decrease melanin production. Sometimes, the arrival of gray hair can be a sign of an underlying health problem. Werner’s syndrome, a disease that mirrors the symptoms of aging in people as young as 20, can spur the premature growth of gray hair. Pernicious anemia, a disease marked by a vitamin B12 deficiency, is also associated with decreased melanin production.

Although there are people who think that a big shock or trauma can turn a person’s hair white overnight, only a rare disease has been known to cause this phenomenon. Called alopecia areata, the condition causes the thicker, darker hairs to stop growing before it affects the growth of gray hairs—meaning people with the disease seem to “go gray” overnight as the darker strands are diminished and the gray ones keep on growing strong.

Overnight graying myth aside, what about that pesky old wive’s tale that says pulling out a gray will result in five more springing in it’s place? That’s also wrong! So yank away. I, however, don’t have that kind of patience, so it’s back to the salon for me, for a little color to cover those stubborn grays.

Thanks for this information.
Hair Salon Bondi

I spotted my first gray hai when I was very young maybe 6 or 7 but it’s more like a “mistake from the body” then a real hair.
I rememer last year when I’ve hit 22.. I didn’t want to be that number, I wasn’t happy and to add more I saw 3 white (real pure white) I wanted to cry! I just peel them when I saw some… maybe 1-2 a month. Damn I hate them :'(

It will be a really big work for me to accept that. My mom is 55 and almost all white. My father is 66 and still like 70% black ahahahahah! Obviously I’m more on my mom’s side :(

Well I have a 14 yearold friend and he has like 5 strands of grey hair. It is probably caused by stress, weather in North America (Canada), and defiantly genetics!

My kids 14, 15 and 17 boys are having gray hair. What must be the cause of this? Is it a sign of medical problem? Vitamin deficiency? Has growth vitamin (Cherifer with Zinc) caused it?

what is the cause of gray hair at twenties?

A really informative post. I don’t know if my story is any use, but I started going really grey around 22. By coincidence really, I changed my diet and cut out a lot of high GI and high sugar foods. I basically started cooking everything from scratch as I moved house and couldn’t afford to live any other way! My hair then noticeably got a lot less grey to the point now where I have no grey hairs at all 2 years later. I know there are other factors that come in to play but for me, it looks like my diet was to blame. Might be worth further research! Becky

I wrote about my experiences with my hair on my blog http://zerosugardiet.com/lifestyle-blog/why-i-quit-sugar/

NO!!!! it isn’t genetics! so tired of people saying that! trust me! no one in my family went gray at 17 like i did! STRESS CAN DO IT! i am sooooooo sick of hearing it is genetics! maybe in some cases….but stop saying that!

I am a 19-year-old female with grey hair. I had my first grow in at about 9. At this point, roughly 40% of my entire head is a grey/white color. I don’t dye it. In fact, I love it. In my case, genetics do play a role. My dad was completely grey by 27. If I part my hair a certain way, the entire front of my hair appears white. People often ask about my hair, but it has never bothered me. I wouldn’t change it for the world.

I am turning grey(hair) at fourty five. Everyone is commenting!

I noticed my grey hair when I was a teenager around 18 I think. My sisters friend noticed it and pulled it right out. And we were taught a lot of superstition. One about pulling out grey hair and how many more would grow back if you pulled them out. I’m 38 now and I have little more grey here and there, but I’d just rock it. My kids like pointing them out to me every so often. I love my grey hair.

Hi I am 31 years old woman I just find few write hairs this month what can I do to help pigments in my hair colour to stay in colour I am thinking dye my hair can some help me out I do take vitamins b6 and hair and nails vitamin do they work?

Hey, am 24 and i just realise i have several gray hair. am really depressed. Is there any remedies to help stop multiplying. please help me i really don’t like having gray hair.

This blog is very informative related to gealth issues. Being a father its very helpful for me and my childerns. I must say these are the best blogs for health.

im 12 and I have grey hairs

I got my first gray hair at 18 im 24 now and i have individual gray hairs everywhere . what should i do where should i go in Colorado Springs CO ?

I have walnut trees on my property. When I go out to pick up fallen walnuts, the husks stain my fingers dark brown for days- no boiling required. I’d say using browning walnut husks (rinds) is an even easier way to darken hair, though I’ve yet to do it. I’ll try it in 3 weeks…

I started going grey at 16, and was completely grey by 24. I’ve embraced it now, but there were times I dyed it auburn or black.

tell me what’s goin on