If a person doesn’t sleep for three days, does he/she become legally insane? 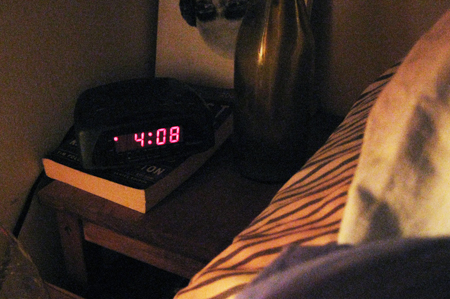 Can going without sleep drive you nuts? [Credit: Molika Ashford]

Is sleeping for a lot of short periods the same as a full eight hours?

How come my sleep cycle gets so out of wack?

The big test is tomorrow, and you just opened the book to start studying. Alas, all that procrastination has a price: It’s time to pull an all-nighter. As the wee hours of the night pass by, your mood changes from giddy to cranky and back again. Concentration becomes nearly impossible, and you’ve only been up a few hours past your bedtime. As you desperately fight off the urge to sleep, you wonder: How much more of this can I take? If I stave off sleep long enough, will I go insane?

Despite some urban myths that suggest the contrary, the answer is no.

The idea that sleep deprivation has psychiatric consequences stems from the discovery of rapid eye movement (REM) sleep more than 50 years ago. According to Dr. Mark Mahowald, director of the Minnesota Regional Sleep Disorders Center, researchers had found that some people began “hallucinating” when awakened from REM sleep. However, scientists soon realized these people weren’t hallucinating at all—they were dreaming.

The classic example is Randy Gardner, who in 1964 at the age of 17 stayed awake for 264 hours (11 days) straight. While he did experience some dreamlike escapes from reality, he made it through the week-and-a-half without any mental problems.

Another problem with linking sleeplessness and insanity is that without scanning brain activity, it’s impossible to prove someone has been awake for extended periods of time. When people are sleep deprived, they tend to experience brief episodes of sleep known as microsleep. So even if someone supposedly stays up for days on end, he still may have gotten small doses of sleep. These short “naps” can prove extremely dangerous when they occur during activities like driving because the person usually doesn’t realize he’s zoning out.

While depriving oneself of sleep cannot lead to a psychotic episode when awake, it may lead to problems once that person finally gets some shuteye.

Mahowald is a consultant for Sleep Forensics Associates (SFA), a group dedicated to investigating the role of sleep disorders in criminal and civil trials. Many of these cases concern people who say they had no control over their illegal actions, including rape and murder, because of sexsomnia (sexual behavior during sleep) or sleepwalking. Mahowald says sleep deprivation can trigger sleepwalking episodes.

While sleep-deprived people still have fully functional brain activity, sleepwalkers only have part of their brains in a state of wakefulness. “Sleepwalkers are capable of amazingly complex behaviors, but they may not be aware or responsible for what they’re doing,” says Dr. Michel Cramer Bornemann, SFA’s lead investigator. He says sleepwalking is difficult to describe in legal terms—it doesn’t fit the definition of insanity because there is no mental disorder involved. “About 5 percent of adults sleepwalk,” he says. “So that would mean 5 percent of the population is temporarily insane.”

The possibility of doing something terrible in your sleep is extremely small, but just because sleep deprivation won’t drive you insane doesn’t mean you should pull consecutive all-nighters. “A lot of things go bad when you don’t get enough sleep,” says Michael Twery, Director of the National Center on Sleep Disorders Research in Bethesda, Maryland. Failing to get enough sleep may be associated with poor concentration, memory lapses, loss of energy and emotional instability—not to mention some chronic diseases.

The moral of the story: You may not be heading for insanity, but go to sleep anyway—here are some sheep to count if you need help.

So, by law can you get away with murder if you’re “legally insane” by not sleeping for 72 hours? What are the side-effects of this level of sleep deprivation and which of them are temporary/permanent? I’m not planning to kill anyone, I’m just curious. ;) It must be quite a buzz to dream while awake, no? :S

Turst me it is quite a diffrent expearince i say awake 4-5 days at a time sometimes. its alot like rolling on extacey. wich is also quite an expearince.

I dont think you’d kill anyone, but its one hell of an odd feeling. When I was younger me and my friends use to do this all the time (competitively). The longest I have stayed up was about 5 days max. After a while, (around the third day mark) I would start to see traces. And around the forth day I would hallucinate a lot (as in I would see stuff that wasnt really there “like a cat running by me” or “shadows”) but I never felt like I had to go kill someone XD LOL. To accomplish staying awake you should really be out walking, because as soon as you sit down after being up for even two days, you’ll be out like a light.
Its even easier if you like the smell of cocaine, HA HA! :P

i think i hallucinated i saw my white cat jump off my bed and go under the bed.My mom was there and i asked her where is the white cat she said he was outside.

I stayed awake for 14 days last month…where the fuck is my record?

When i stay’d up for 72 hours i got hella depressed feelings, and minor audio/visual halucinations

I stay awake or three four involuntary day. stints with perhaps a good night sleep or 4 hours of it anyway I know what you mean by roll on hallucinations and noises are becoming an everyday event,I’m beginning to wonder if there’s something g wrong with moi…

1, you can have a psychotic episode or break if you stay awake long enough, its published in journals and experiments were done in the 70’s about this. hallucinations , here this is one that explains it well.. Was this a paper for school? Do you have to take a side and argue it? http://www.world-of-lucid-dreaming.com/sleep-deprivation.html

I stayed awake for 72 hours then got sacared

Sleep deprivation is very unhealthy and unpleasant. You can experience severe depression, inability to concentrate, irritability, hallucinations, mood swings, and it reduces your body’s ability to fight off disease. It can absolutely make you kill someone if you drive a car or operate other heavy machinery. In short, get some sleep people!

Sometimes during sleep, i would get these awesome ideas, like how come no one’s done this before. Like if you do not like the way things are in real life, just open your eyes and close them to reset the world, or edit out bad feelings, and others. of course most of the ideas i get only make sense in the dream. perhaps you could come up with some actual beneficial ideas if you are awake instead of dreaming. bla whatever, im not here

Seriously Rox??? You must be a defense attorney. NO…you can not go insane from sleep deprivation but it can cause serious short term issues with your mental system. NOT INSANITY!! A study from the 70’s when they had so many unfounded diagnosis in so many publications

Worst then anything. I oftenly suffer with this problem. . Last time I felt so depressed when I stayed awake for 72 hrs.. even after gyming.. I felt like mad

I’ve been basically awake since 1975. Just 5 or ten minutes. Sleep if I’m lucky. No medshelp. Seriously. Chronically. I’ll not sleeping is torture

I’m fifteen, autistic, and have only slept for 13 hrs over the last 3 days. Not a good combination. I don’t know what it feels like to be drunk, but I think that this is like it…
All that’s keeping me from half-past dead is a lil determination, lots of caffeine, and a big bottle of tea with an added 1/2 cup of sugar lol

i went for 36 days without sleep once, my record isn’t in existance

Was hospitalized 3 times for sleep deprivation. I had 2 back surgeries in last7 yrs along with left knee and rt foot surgery. I can’t sleep because of pain.sleeping pills don’t work. Torso use to help the spasms all the time.

i was looking for a yes or no answer

My, my, has anyone here heard of the character Murdoc from the new MacGyver reboot? No? Just as well, I feel just like him, and I’m about 36+ hours without sleep!. *laughs*

I’m only 13 yet I only get about 1&1/2h of sleep. I mean I do gymnastics until 8:30 and then I have to do homework and study until about 12:00 and then it takes me until 5:30 to get to sleep, then I have to get up at 6:30 for choir. And the sad part is I’m not even exaggerating. And of course if you can sleep in or go to bed early (the holidays) then you still stay up late and wake up early because your internal clock won’t let you do anything else so I just pass time by my phone and working out (witch is what I am doing right now). I mean I’m only in year 8 and it only gets worse from here. We gust need less homework and assignments and studies might get that ridiculous minimum of 8h of sleep that is impossible to achieve. To be honest I quite often just pull all nighters. However I have never experienced any of the side effects mentioned except for falling asleep at my desk or reading occasionally. Anyway by (sorry about the boring essay. It’s the holidays so I still have 12h to look forward to ).

Well I hand on my heart have been awake now for at least 10 days, and even though my decision making, motor functions, balance, most of the things mentioned are effecteted I still feel ok considering… no phsychotic episodes as of yet thankfully

The individual in this was age 17 at the time of 11 days with no sleep. In our teenage years we are able to withstand more endurance of sleepless nights and physical activities than when we are older from the evidence I have seen. Unless studies are done on thousands of people a information of a few individual experiences is pointless. I personally stayed awake for 36 days giving 24 hour care that required a sharp clear mind at all times. At the time I was age 24. I would sleep for 1 hour timed every 4 days while another person took over. I experienced no hallucinations or anything like this study. I also had no sleep with no food or drink for 12 days I experienced no dosing off and no hallucinations I was age 33 at the time.