As historic pollutants ebb in the Arctic, poisons from fossil fuels are taking their place 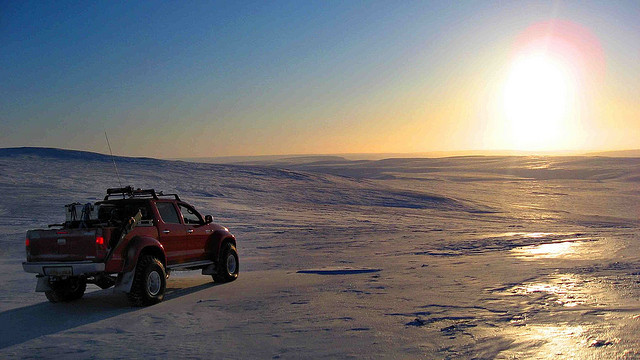 Restrictions on airborne toxic pollutants like DDT appear to have reduced concentrations of many harmful chemicals in the bodily tissues of Arctic animals. But at least one family of hazardous compounds — polycyclic aromatic hydrocarbons (PAHs), linked to the burning of fuels like coal and oil — has lately grown to troubling levels, researchers are reporting.

The study, published online in early September in the journal Environmental Science and Technology, was based on measurements of 25 pollutants in more than 20,000 tissue samples collected in the Arctic between 1985 and 2010. Though the original tissue samples were from fish and mussels, the scientists applied a mathematical model to deduce pollutant levels in 21 Arctic species throughout the food chain, from blue mussels to polar bears.

The model showed that concentrations of the pesticide DDT and the family of electrical insulators known as PCBs (for polychlorinated biphenyls) have fallen in Arctic animals since 1985. The study’s lead author, Frederik De Laender, an environmental toxicologist at Ghent University in Belgium, says that over time, major drops in these substances coincided with international legislative efforts that resulted in widespread bans on DDT and PCBs.

“It means the actions really had beneficial results in the environment,” says De Laender.

PAHs, however, have blossomed into a new problem. Between 1990 and 2005, PAH levels in Arctic species steadily grew. In some cases, the jumps were huge. In mussels, for example, the increase was between 10- and 30-fold. Although pollutants like DDT and PCBs once constituted the bulk of toxic substances found in Arctic species, by 2005 concentrations of PAHs were 100 times higher than concentrations of either of those legacy pollutants for that same year.

De Laender and his colleagues believe that the observed rise in PAHs was likely due to increasing consumption of carbon-based fuels. Their finding is a reminder that rising global temperatures and sea levels are not the only consequences of our dependence on oil, coal, and natural gas.  “People should look at more than just temperature effects following ever-increasing levels of fossils fuels,” De Laender says.

Legislation restricting toxins like DDT and PCBs from entering the environment hasn’t typically included limitations on PAHs, according to Rainer Lohmann, an environmental chemist at the University of Rhode Island.

“PAHs are not as long-lived as some other compounds,” he says, so they’re often not perceived to be as dangerous as other pollutants. Sunlight can dissolve airborne PAHs within weeks, while PCBs can take decades to break down.

Pollutants like DDT and PCBs have been tied to neurological and immune system breakdowns for a whole gamut of Arctic species by the Arctic Monitoring and Assessment Programme, an information-sharing effort by the eight Arctic nations. But for PAHs, very little research has been done to determine their effects on wild animals. Controlled lab tests, however, suggest that animals exposed to PAHs can develop cancer via inhalation or skin contact, according to the National Institutes of Health’s Hazardous Substance Database.

PAHs are deeply integrated into current lifestyles. Since they are released by the combustion of organic matter in everything from coal-fired power plants to barbecue grills, eliminating them would be almost impossible. According to Lohmann, researchers have found high levels of PAHs in inner city air, but policies regulating these toxins have been slow to catch up with the mounting evidence of their omnipresence.

“We try to do the best we can,” he says, “but nobody dares to say we should get rid of them.”