Cranking down the heat 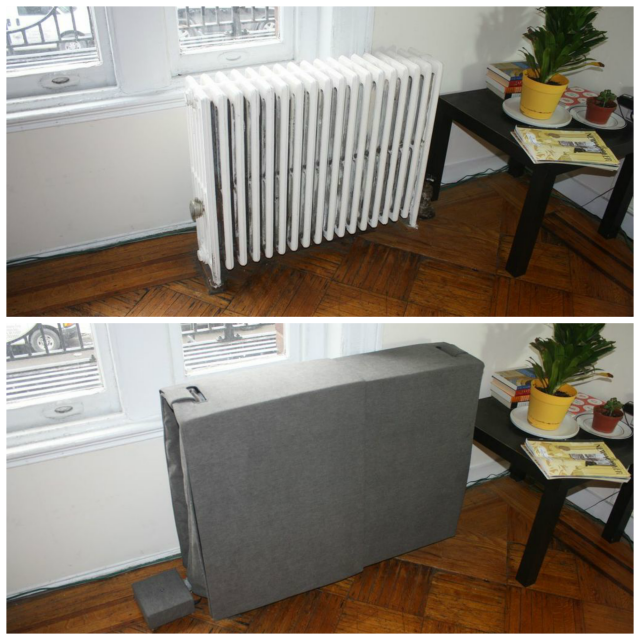 The Cozy, which fits over any radiator, stops your apartment from wasting heat and is part of Marshall Cox’s solution to a decades-old problem in NYC. [Image credit: Marshall Cox]

“Did you see that?” Marshall Cox exclaims, holding out a magazine plucked from his coffee table in Brooklyn Heights. On the cover of a recent New Yorker, a man and woman wearing only their skivvies peer out through their bedroom window as snow flurries fall in front of a familiar New York City skyline. But Cox is pointing to the far right of the page where, beneath a window and just barely in the frame, is a boring old radiator. “It’s perfect!”

There’s no way of knowing why the fictional couple was half-dressed, but it could have been because their radiator was pumping out far too much heat for their tiny apartment. Cox, 34, can help them with that. He’s engineered an ingenious way for tenants to reclaim control of their own radiators and recently launched a company called Radiator Labs to cut the waste heat generated by New York City’s ancient system of steam pipes.

Anyone who has woken up sweating in the middle of a winter night understands the problem. Radiators often blast too much heat when they’re on and the few that come with controls allow for only the crudest of adjustments. Cox’s solution — awarded the $125,000 MIT Clean Energy Prize in 2012 and Popular Science’s Annual Invention Award just last month — is an insulated cover that goes over the radiator and uses sensors and a fan to release heat in a steady stream instead of a blast. You can set it to a pre-programmed temperature, and adjust it through an app on your phone. Cox calls the $250 device, “The Cozy.”

In the Northeast, residents pay on average $1,050 per year for heating and Cox said the extra heat that makes a space too warm or escapes through an open window accounts for about a third of that cost. “When you put our system over the radiator and start metering out heat at a lower rate, you can make it so that the room gets cold when the window is open,” he said. That means The Cozy can pay for itself in between one to four years for those who use steam heat. The exact length of the payback period depends on the type of fuel that the building uses — less time for district steam, longer for heating oil and even longer for natural gas.

Cox estimates that overall, New York City is wasting about $1 billion in heating costs each year, “which is enormous.” His calculation is based on figures from the American Housing Survey, which shows that about 3.5 million units in NYC use steam heat or hot water. Cecil Scheib, chief program officer of the Urban Green Council, a nonprofit devoted to making sustainable improvements in city buildings, said that’s not a bad estimate, though the cost of waste heat could be anywhere between $200 million to $2 billion based on varying figures for boiler inefficiency, number of units with steam heat and average annual heating costs.

“It makes sense that sometimes tenants may want to take energy savings matters into their own hands and products that try to do that fill what is probably a popular niche,” Scheib said, adding that in New York City, heating accounts for about a third of all building energy use.

This may explain why Cox is already winning converts in the real estate community. Tom Bencivengo, a partner at a real estate company called Synapse Capital that specializes in rehabilitating residential properties, believes so strongly in Cox’s work that he asked Cox to install heating systems in two apartment complexes. The Cozy was still only in its pilot stages at that point so Cox couldn’t fill the request, but he did convince Bencivengo to join Radiator Labs as an advisor.

So how did we get stuck with steam in the first place? Steam became the preferred heating source in New York and other cities because it was lightweight, which meant it could float upward without any pumps or fans. This was a crucial factor for developers who needed to get heat up to the highest floors of the country’s first skyscrapers, built in New York in the early 1900s.

“Steam just made sense,” said Dan Holohan, the founder of HeatingHelp.com and an industry expert. “There’s really no limit to how high you can go. The Empire State Building runs on steam.”

But you won’t see any modern builders installing radiators in their walls. Now, with today’s pumps, you can heat the same building for much less money by using hot water. For older buildings that already have steam installed, however, it’s far too expensive to switch out. The average building in New York City is 73 years old with a lifespan that is much higher than the national average, according to a recent report by plaNYC, the city’s initiative to reduce greenhouse gas emissions. Demolition and new construction only happens at a rate of 0.5 percent each year. That means that in 2050, 80 percent of the buildings that currently exist in NYC will still be there. For now and in the near future, the city must live with steam and the radiators that deliver it.

Cox, who holds six U.S. patents, knows firsthand how hard it can be to live alongside a radiator. While he was a doctoral student in electrical engineering at Columbia University in Manhattan, he lived in a steam-heated apartment. Each night he would wake up in a sweat and open a window before falling back asleep — only to be freezing by morning.

“He spent a lot of time complaining and I don’t tolerate complaining,” said John Kymissis, an electrical engineer at Columbia who mentored Cox at the Columbia Lab for Unconventional Electronics. “He and I were eating lunch in the break room and I said, ‘Stop complaining, start doing something!’”

So Cox, who received both his bachelor’s and master’s degrees in electrical engineering and materials science from Cornell University, put his expertise to work. Within a day, he had engineered The Cozy and his apartments have been a cool and comfortable 74 degrees Fahrenheit ever since. “Right now, a normal radiator can store about half an hour of heat,” Cox said. “You have a huge hunk of iron that’s basically a thermal battery that you can sip from over time.” The Cozy does just that by trapping the heat within a confined space and then fanning it out, as needed, to the rest of the room when a temperature sensor detects that it has gotten too cold.

Cox knew he was on to something when his friends started placing orders — they, too had been getting up in the middle of the night to open their windows. He and Kymissis created Radiator Labs to take his product to market and look for other ways to improve steam heating. While most of his labmates from Columbia opted for trendier projects like LED projectors and spectrometers, Cox took a different approach. Rather than jumping ahead to the newest ideas, he creates transitional technology that serves the antiquated systems that must remain in place before the bridge to newer technology can be boldly crossed.

“My first impression was that he was reinventing the wheel and that he was crazy,” said Holohan of HeatingHelp.com. But Holohan also knew that the concept underlying The Cozy had been around for as long as steam heat. He’d heard of a decorative radiator cover from Victorian times that acted like a teapot cozy. Modern consumers can buy a thermostatic radiator valve that opens or closes to regulate steam with room temperature, but these valves must be installed by a plumber and only have a so-so success rate. The Cozy’s big innovation is in the pinpoint accuracy of its fan-and-sensor design and the user friendly interface that can adjust temperature with a few clicks of a cell phone. After seeing this, Holohan changed his tune. “This thing has the potential to empower tenants to fix the problem themselves, and that is truly unusual,” he said.

These days, Cox works out of a shared office in Brooklyn, where bits and pieces of electronics are strewn about, boxes are stacked askew and a conference table is piled with prototypes of The Cozy 2.0.

“What we’re doing with this next generation is reducing installation time to potentially five minutes,” said Cox of the user-friendly improvements. “We’re trying to make it so that, like, my mom can install it.”

He recently hired his first employee and is tweaking the finer design points of The Cozy. He’s upgrading the upholstery material for the outside, creating a telescoping ability so the cover can fit a radiator of any length and adding rigid inserts that can be removed to make it lie flat for shipping. After a failed Kickstarter campaign in February that Cox chalks up to his poor execution, he has started accepting pre-orders on his website. He promises to deliver just in time for the next winter.

Right now, The Cozy is being put to the test at Columbia and New York University (NYU), as both institutions have hired Cox to improve their heating systems in dorms. Cox installs The Cozy and makes tweaks to basement boilers to achieve optimal temperature throughout the buildings. “Most residents report their rooms are regulated at a more comfortable temperature,” said Columbia spokeswoman Kristina Hernandez. This approach also generates a ton of data, which can lead to other remedies for heat loss such as insulating a room that cools too rapidly.

As steam-heated old buildings lose efficiency with time, the demand for Cox’s services will only increase — until, finally, those buildings are remodeled or demolished. In the meantime, Cox is carefully scaling up to take on more clients with feedback from the pilot systems at NYU and Columbia. Simultaneously, he’s refining The Cozy and taking his first orders for an idea that was hatched from his own uncomfortable encounters with steam heat.

“Anywhere there’s old buildings in America, you find this stuff,” said HeatingHelp.com’s Holohan. “I think [steam] will be there until the buildings fall down. So the potential to go beyond New York with this product is there.”

It will help to reduce the heat and fix the problem.

very informative article … thanks for sharing…

Thanks for this information, This is very cool information who interest in this field.

Such a great post, thanks for sharing this useful blog.

This is a nice post worth so much. It contains very helpful information.

This site is just awesome post. This site has some excellent patterns.Thanks for sharing such a useful info with us.

wow I am very surprised to see that

Thank you for sharing such good information. Very informative and effective post. Keep it up!