Why some people see fewer colors than others 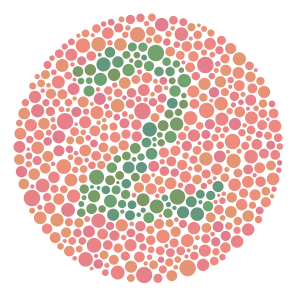 Can you see the number in the circle? The number two is clear to those with normal vision but invisible to those who have one type of colorblindness. [Image credit: Sakurambo via Wikimedia Commons]

The late English chemist John Dalton knew all about the frustrations of colorblindness. In the late 1700s, he and his brother were convinced they saw the world differently than everyone else. Since his brother also saw this way, he thought the condition was genetic and spent much of his career trying — and mostly failing — to convince others that his vision really was different. He was so convinced, in fact, that he had his eye preserved after his death. Testing later revealed Dalton had a rare form of colorblindness (now referred to as Daltonism): He saw the world mostly through shades of yellow.

How we detect color

Color recognition begins in the retina, a layer of tissue lining the inner surface of the eye. The retina contains two types of photoreceptors — specialized cells capable of absorbing photons or tiny particles of light — called rods and cones. Rods distinguish between black and white, helping you to see in the dark, while cones work in bright light, allowing you to see color. When light strikes the retina, your rods and cones work together to send signals down the optic nerve and to the brain, which creates an image based on the colors you see. A normal eye has three types of cones — L, M and S — each of which detects a specific range of colors. Working together, they cover the entire visible light spectrum.

Colorblindness occurs when one or more cone types are either completely absent or not working properly. Anomalous trichromacy occurs in people who have all three types of cones, but one type is defective. The effects are mild and some people don’t even realize they have it.

People who completely lack one type of cone have a more serious condition called dichromacy, causing them to miss out on an entire section of the visible light spectrum. For example, if you were missing the M cone (which detects green wavelengths) and looked at a tree, the green leaves would be indistinguishable from the brown branches. It would be a bit like someone speaking to you half in English and half in Spanish: If you don’t speak Spanish, you’d only understand part of the conversation because your brain is only equipped to handle English.

The last type of colorblindness, which is extremely rare, is monochromacy — in which two of the three cone types are missing. Those afflicted most often have a deficiency in rod cell function as well, causing monochromats to see mostly blurry images in only black, white and shades of gray.

Sometimes, trauma or damage to the eye can cause acquired colorblindness. Additionally, although rare, both alcoholism and some congenital diseases have been linked to colorblindness as well.

Color often means much more than just the various wavelengths of light. It can express emotion — when you’re feeling blue, or green with envy — and evoke beauty too. In Jack Kerouac’s “On the Road,” he describes the sunset as: “A purple dusk over tangerine groves…the sun the color of pressed grapes, slashed with burgundy red.”

So do colorblind individuals feel emotion differently than the rest of us? In a documentary about colorblindness, Evans Ford, a colorblind musician, argues no. He believes that the idea of color is in our heads, not in the world. “It’s an artifact of perception; it doesn’t exist separately from the person who is experiencing it,” Ford said in the documentary. And in a recent TED Talk, colorblind artist Neil Harbisson, who only sees in shades of gray, described his experience using a device, which attaches to his head and turns color into audible frequencies. The machine allowed him “to hear a symphony of color.” Interestingly, he found that the sounds of color don’t necessarily correlate with how people say colors look. For example, when dressing for a funeral he would wear purple, turquoise and orange, a color scheme that sounded mournful to him. Perhaps colorblindness reminds us that beauty really does lie in the eyes of the beholder.