Long John Silver’s invites you to the seafood revolution

Their “Think Fish” campaign aims to refresh an outdated, unhealthy model — but can it be saved? 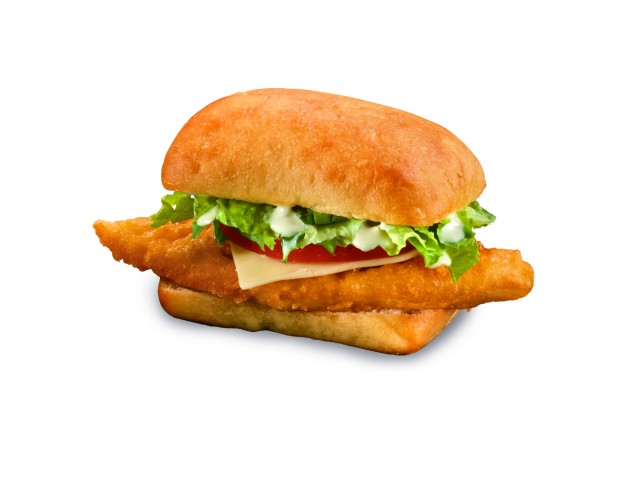 According to company lore, Long John Silver’s founder, Jim Patterson had an “ah-ha” moment during a deep-fried dinner while vacationing on the coast back in the 1960s. Patterson took one bite of his fish and chips and vowed to take that classic British dish back with him to the landlocked Midwest. The company has since built 1,250 locations, and now proudly calls itself America’s largest seafood restaurant.

But a very public outcry that broke last summer landed Patterson’s fast food chain in hot water. The Center for Science in the Public Interest, a public health advocacy group, declared the chain’s “Big Catch” combo meal to be the Worst Restaurant Meal in America. This single meal packed 33 grams of trans fat into hush puppies, onion rings and a deep-fried fish filet that was three times the size of a normal portion — and contained more than two weeks worth of the recommended daily allotment of trans fat by the American Heart Association.

Trans fats build up “bad” cholesterol in the body — the low-density lipoproteins that increase risk of heart disease — and may also reduce “good” cholesterol, or high-density lipoprotein. The Food and Drug Administration (FDA) estimates that cutting out trans fats from the American diet could prevent 10,000 to 20,000 heart attacks and 3,000 to 7,000 deaths by coronary heart disease each year (it can’t be expected to trim obesity, because saturated fats in replacement oils contain just as many calories).

When these negative health effects became widely known around 2003, many fast food chains voluntarily phased out partially hydrogenated oil, a main source of the offending fats — which were primarily used to improve shelf life and flavor stability — and turned instead to the saturated fats of canola, soybean or palm oils. “Long John Silvers and Church’s were probably the two biggest holdouts,” says Michael Jacobson, director of the Center for Science in the Public Interest. “They set themselves up as targets.”

Caught and called out in a very public shaming, Long John Silver’s representatives will tell you that the brand had already started to take steps to phase out trans fats from their menu even while advertising a trans fat behemoth. The backlash to the Big Catch just kicked those plans into high gear. “The CEO and Chairman of the board visited our office,” recalls Jacobson. “They said they were going to get rid of partially hydrogenated oil by the end of the year. I think it was August. They clearly were making that change as fast as they could.”

When the chain found a promising soybean oil to serve as a replacement, Marie Zhang, chief food innovation officer, asked 3,000 customers to sample it on chicken, fish and shrimp — the chain’s core products. Patrons couldn’t tell a difference, so she sent the soy oil out to a dozen restaurants for a four-month pilot last fall.

Just seven months after the Big Catch made headlines, Long John Silver’s announced in January of 2014 that it had completely abandoned trans fats. Just in time, too, as the FDA is now considering re-classifying trans fats so that companies must obtain approval to use them, which is a means of achieving the effect of a ban through a softer regulatory mechanism. The Center for Science in the Public Interest has shifted its trans fat attacks to Joe’s Crab Shack, a nationwide seafood chain that still cooks with partially hydrogenated soybean oil. In a press release, Jacobson berates Joe’s and points to Long John Silver’s as a shining success.

But trans fats are only a sliver of the story as Long John Silver’s aims to bring in more business from what they see to be a seafood-starved country. In fact, Long John Silver’s is undergoing a total brand overhaul aimed at playing up the healthiness of fish, as opposed to the meat-laden plates of other chains. All this while it’s getting its legs as a private corporation following a long period of underachievement at one of the nation’s biggest food companies.

The company floundered as a private corporation for decades after Patterson started it back in ’69 and was purchased in 2002 by the predecessor of Yum!, a food conglomerate that also holds Taco Bell, KFC and Pizza Hut. In the shadow of such dominant siblings, Long John Silver’s and A&W Restaurants became the “ugly stepchildren” at Yum!, says Denise Lee Yohn, a brand consultant who specializes in fast food restaurants. “I think they always played second fiddle in terms of marketing investment and leadership attention and probably resources in terms of product development and store environment,” she says.

After struggling as a dunce brand during “two lost decades” as CEO Mike Kern described it to Nation’s Restaurant News, Long John Silver’s was sold to a group of franchisees in 2011. “I think spinning off from Yum! was probably their best chance at surviving,” says Yohn. Investors sunk $15 million into the deal and sales went up by five percent in the first year. With the enthusiasm of new ownership, the marketing division created a new campaign called “Think Fish” and teamed up with the Seafood Nutrition Partnership to spread the word that fish is healthy, pointing to the government’s nutrition tips suggesting two servings of fish per week.

But even without the trans fats, fried and battered fish is probably not what government officials had in mind when they wrote these recommendations, says Lisa Sasson, a registered dietician in New York City who compared Long John Silver’s nutritional facts before and after the switch from trans fats. Her colleague Marion Nestle, public health expert and author of “Food Politics,” agrees, “Trans fats are a marker for junk foods. Even without trans fats, they will still be junk foods.”

Anticipating this critique, Long John Silver’s introduced baked fish for customers who wanted to avoid the batter. Sasson notes high levels of sodium in the new baked entrees, and points out that she could prepare fish at home with four simple ingredients (fish, oregano, lemon juice, olive oil) while the versions at Long John Silver’s comes served with long lists of additives. Even an ounce of Crumblies, those crunchy morsels of yellow batter that fill the bottom of each basket, has 360 milligrams of sodium and 13 grams of fat.

Despite the nutritional critics, Yohn, the brand consultant, thinks fish still deserves respect in the fast food industry of an increasingly health-conscious America. “Everything you read is more fish,” says Yohn. “I think trying to figure out what is the right balance of fried fish versus baked will be really important, if they’re going to go down this route to healthy.”

Charles St. Clair, the chain’s chief marketing officer, says Long John Silver’s will keep innovating around the battered versus baked debate, all in a turn toward healthy, which has become such a popular industry trend. “I think as we continue to evolve our menu, you’ll see more non-fried options,” he says. “I think you’ll see more fresh options and salads and soups.”

Combined with their swift action on trans fats, the rebranding and menu overhaul might make the company into an unassuming industry leader, emboldened by their newfound independence and flexibility. “I think they can really pump up the positive about all these steps, and put the attack in the past,” Yohn says. “I’ll be cautiously optimistic.”

If Long John Silver’s can make the case for fish as both healthy and delicious in spite of last summer’s snag — the brand may have found its perfectly modern catch.

This is unfortunately true. The hghier the fat intake the hghier the risk of stroke. Women over a certain age should watch what they eat and also start and exercise routine to stay fit. This will ensure a lower risk of stroke or heart disease.