Meet the best toolmakers in the animal world 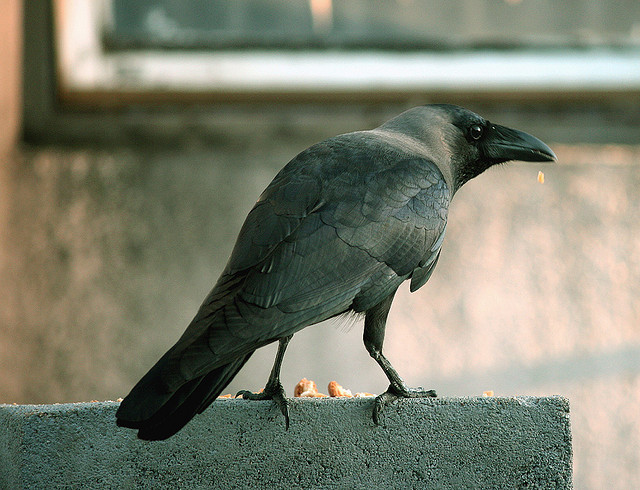 Crows are some of the most intelligent birds around, and the New Caledonian crow is perhaps the brightest of them all. [Image credit: dontDndSudarshan V on Flickr]

Off the shores of Australia lay the island of New Caledonia. It is home to countless unusual species — the largest skink in the world and the flightless Kagu — but one of the most notable is a bird that is black from its beak to its feet, the New Caledonian Crow.

While it doesn’t look any different from the average crow you might see out in a cornfield or hanging around in the city, its ability to craft and use it’s own tools surpasses that of most other crows. In fact, the New Caledonian crow is in the running with the chimpanzee and the elephant for the most intelligent animal — at least when it comes building tools.

A recent study in the Wilson’s Journal of Ornithology, shows that the New Caledonian crow is the only known species to use “hook technology.” Their hooked tools, while simplistic, are designed to drag out bugs, such as termites, from hard-to-reach places.

But that’s not the only thing that sets these birds apart. Crows are extremely social creatures, not unlike humans. In fact, they are one of the few animals that have a family dynamic that resembles that of humans. Unlike most bird species, when these crows leave the fledgling stage they don’t just head off on their own. Instead, these older birds turn into nest helpmates that share the burden of gathering food for the babies in the nest with their parents. Some scientists believe that this allows baby crows, specifically New Caledonian crows, more time to develop their cognitive abilities and to learn from their siblings who have just left the nest.

However, not all scientists agree that the New Caledonian crow is the smartest animal around. Researchers from the University of Auckland have found that these birds can’t even rival a 24-month-old human baby when it comes to observing behaviors and making connections, which means that these crows do not go through the same complex thought processes that even very young humans do.

Even so, New Caledonian crows can do some pretty amazing things when they set their minds to it. They are able to problem solve their ways through a series of unknown obstacles to get to a final goal — especially when it involves getting ahold of a tasty termite.

The photo used to illustrate this article shows an Indian House Crow, an abundant species with wide distribution in Eastern hemisphere (image does not represent the range-restricted New Caledonian Crow, the species featured in article).