Why do allergies make our eyes swell? 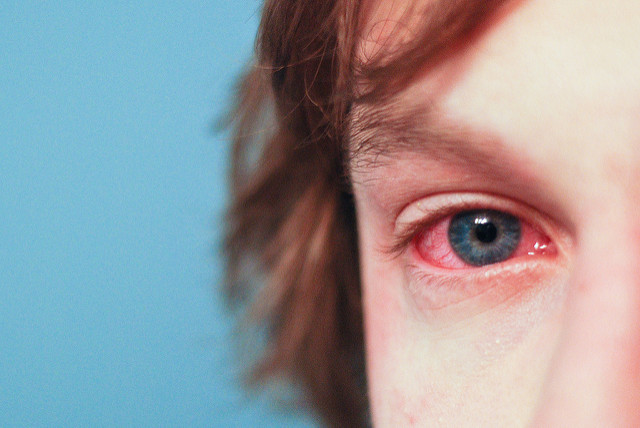 A trigger-happy immune system can turn spring into a warzone [Image credit: Andrew Goloida | CC BY 2.0]

No more needles for allergy sufferers?

The other day I was brutally attacked on my daily run. Half blinded, I stumbled across the pavement, uselessly batting at my assailants. How I dread pollen spores. How I despise allergy season.

My neighbors’ lawn mowers blasted at full power, spewing that loathsome stuff into the already pollen-laden air. My eyes swelled to a Phantom of the Opera-level of disfigurement. And I had to wonder, “Why?” Why me? Why must I suffer so? And later on, after a prodigious amount of antihistamine and a cool compress over my eyes, I wondered, “Why does this happen?”

The reason, it turns out, is that like all people with allergies, I have a hypochondriac for an immune system. Like an over-imaginative child who has just watched a bad horror movie, it misinterprets benign situations as dire threats. My immune system jumps at shadows, screams when the phone rings, and sees every mailman sneezing as a harbinger to the zombie apocalypse.

So why does my immune system behave in this ridiculous manner?

Basically, it’s all just one big, very annoying, misunderstanding. Sometime in my distant past (springtime and I have been at war for the majority of my life), my immune cells encountered a little bit of pollen that found its way into my body. Confusing it for an actual problem that could kill me, these cells produced an antibody — a type of protein — called Immunoglobulin E, or IgE. Antibodies like IgE help the immune system identify and track invaders like bacteria for white blood cells to later destroy.

Antibodies, which are shaped like the letter Y, work like a lock and key. The tip of each prong of the Y has a special shape that fits perfectly together with an allergen. So if IgE is floating around and happens to bump into a pollen spore, the tips lock onto the spore. The IgE then signals a type of white blood cell to release histamine. Ah, histamine.

A chemical so troublesome we’ve invented an entire class of drugs to combat it. Histamine makes tissue swell — it opens up the walls of blood vessels so that fluid and immune cells can enter the vessels and help fight off an invader. And when the blood vessels in your nose and eyes are opened, fluid doesn’t just flow into them. It leaks out of them, too — hence the itchy, inflamed springtime eyes.

While turning your face into a living faucet helps flush out the allergens, it also can lead to a dreadful morning run. Luckily, that aforementioned class of drugs may help. Antihistamines bind to the white blood cells to prevent them from releasing histamine, saving you from a few hours of misery.

As much as I bemoan the horror show that are seasonal allergies, I do realize things could be much worse. Sitting at my keyboard, with clear eyes and lungs, it’s a bit easier to view them as a side effect of how well my immune system does its job. My intrepid white blood cells hunt down dangerous pathogens — bacteria and viruses that could wreak havoc if left unchecked. I’d much rather cope with allergies than try to deal with an underperforming immune system, for example.

But nevertheless, I do resent those overeager white blood cells’ inexplicable hostility towards grass and tree pollen. We’re basically dealing with plant sperm, not the bubonic plague, so my body really shouldn’t go to DEFCON 1 every time I step out the door in May.