The surprising reason why some creatures glow 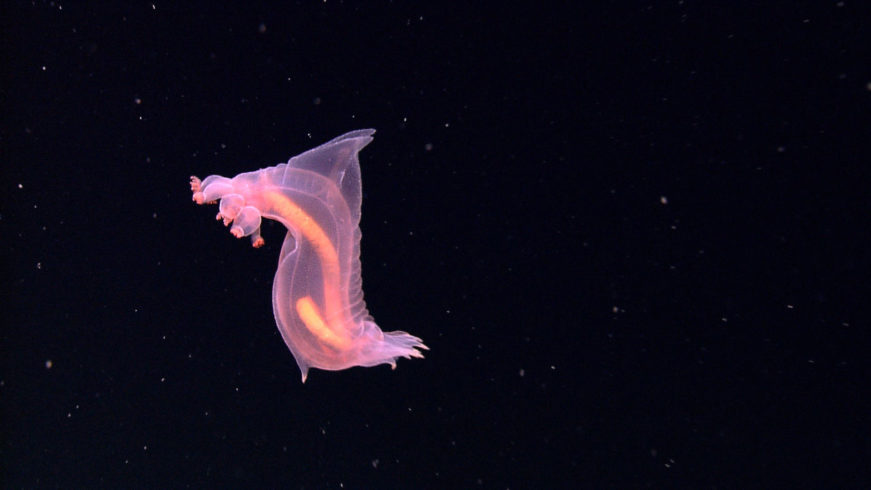 Bioluminescence allows sea creatures, like this glowing pelagic sea cucumber, to communicate with one another. But that wasn’t always the case. (Photo: NOAA Okeanos Explorer Program, INDEX-SATAL 2010 | Creative Commons License)

Deep in the ocean, where even the brightest rays of sunlight can’t reach, the seascape is aglow with a different kind of light.

Schools of hundreds of tiny fish light up at once, signaling to one another to swim in formation. Jellyfish flash, warning one another of a potential predator: a giant squid. Close to the ocean floor, an anglerfish dangles a rod in front of its jaws, tempting prey to come closer.

These creatures are all bioluminescent: They create their own light without any external input. While you might expect the sea floors, trenches and nighttime reefs where they live to be dark, the reality is anything but.

Marine biologists estimate that around 90 percent of creatures living greater than 100 meters deep in the sea can emit light, which they use to shepherd, warn, trick and seduce.

So what enables some creatures to create light out of nothing? Bioluminescence is actually a reaction between three molecules: a protein luciferin, an enzyme luciferase and oxygen.

In the cells of bioluminescent organisms, luciferin and luciferase fit together neatly like two puzzle pieces. Once together, they act like a pilot light, ready to combust. Oxygen is the spark that gets the reaction going. It gets mixed in and — BOOM — luciferin emits a photon, or a light particle that we see.

You might think that bioluminescence was an evolutionary adaptation to permanent darkness of the deep sea.  You’d be wrong.

When bioluminescence first emerged in nature, no one could see it, explains David Gruber, a marine biologist at the American Museum of Natural History in New York City. Eyes hadn’t evolved yet. So while bioluminescence eventually became a way for sea life to communicate and see in the dark, it didn’t begin that way. Instead, many researchers believe that it originally protected organisms from the toxic effects of an element that’s necessary to most life today: oxygen.

Although most animals today need oxygen to survive, that was not the case for ancient microbes. Until some bacteria began producing oxygen around  2.4 billion years ago, the element was very scarce in the atmosphere. As it built up, it became toxic for life on Earth.

It’s well known that luciferin acts as an antioxidant — a shield to protect microbes from the harmful impacts of oxygen. While there is no consensus on when exactly the first bacteria developed bioluminescence, many researchers believe that the reaction helped them survive toxic levels of oxygen. The striking glow was simply a byproduct.

It was only hundreds of millions of years after what geologists call the “great oxygenation event” that the first eye-like structures evolved — giving bioluminescent bacteria and animals another advantage: underwater communication.

“It’s used for everything,” Gruber says. “They can lure prey, they can stun or confuse. They can find each other.”

Some creatures, like jellyfish and sea cucumbers, are able to light up all on their own. But many others, including fish, can only create light with the help of bioluminescent bacteria. These bacteria often inhabit special light organs, such as the fishing rod that dangles from the head of the angler fish, which the host supplies with extra nutrients. It’s a win-win situation; the host gains the ability to communicate using light and the bacteria get food in return.

Bioluminescence isn’t only relegated to the sea. Fireflies, glow worms and some mushrooms are among the terrestrial organisms that can create their own light. However, it’s just not as common on earth as it is in the deep sea, where total darkness makes bioluminescence a necessity for communication.

Right now, Gruber is particularly obsessed with the flashlight fish, which uses light to form schools.

On a recent dive, he encountered dozens of them swimming in a cave and captured them on video, which he now plays on his computer. At first, nothing is visible, just darkness. Then light blue flickering lights start darting around in coordinated unison and an electric crackling noise fills the room. “It kind of takes a few minutes for my eyes to adjust to being in the dark, and then this is what I see,” he says. “It’s like Avatar down there,” he adds, referring to the fictional movie that features a lush, glow-y alien world.

We don’t yet know all the reasons why some creatures light up and others don’t, Gruber says.

Bioluminescence is tough to study. It may be commonplace among sea life, but the creatures that do it are either active at night or live deeper in the ocean than most humans are willing or able to dive. Bioluminescent creatures in captivity, meanwhile, may stop emitting light, due to either nutrient deficiencies or the effects of being removed from their habitat.

“It’s not that often that we see [bioluminescence],” Gruber says. “And then when we go to the deep sea, it’s everywhere. It’s so important. So abundant.”