Learning to live with the lanternfly

I fought the good fight against a backyard invader, but I don’t have it in me this year 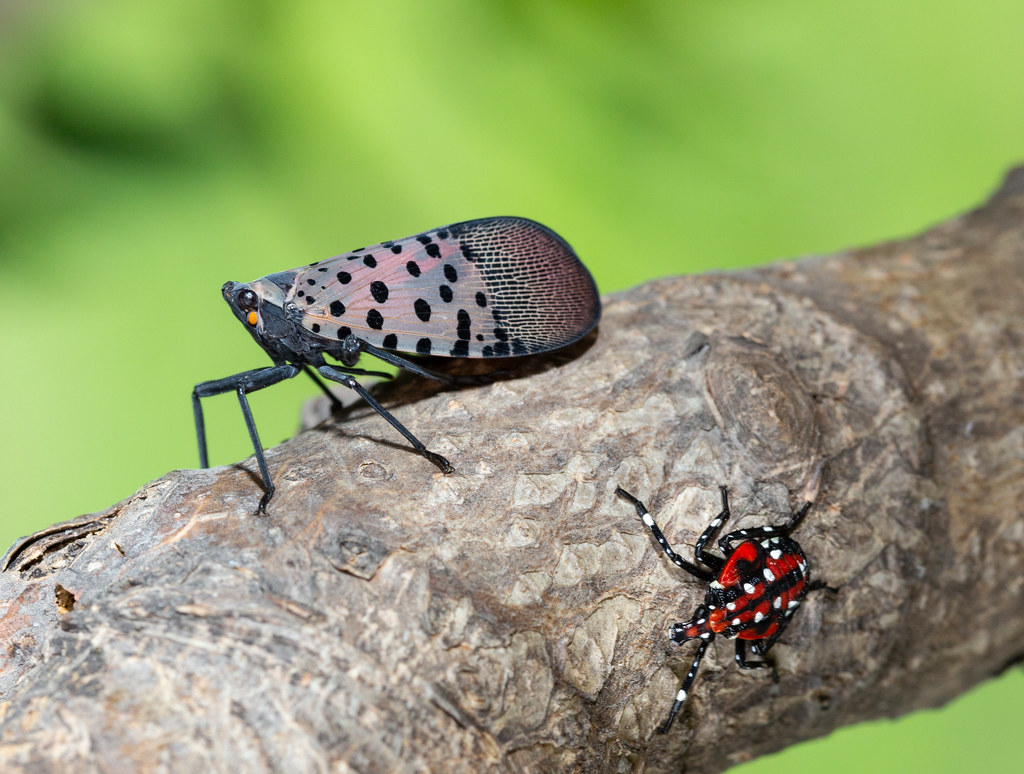 At the start of last spring, I was out of work, stuck inside, and the yard was the only place I could go to escape. I knew every inch of it.

So when a small, black bug climbed onto the fabric arm of my camping chair one morning, I knew it didn’t belong. With the shiny eyes and long trunk, the minimalist color scheme — matte black with geometric white dots — this newcomer was clearly out of place. It walked like a tick, and when I leaned in to get a look, it hopped like a cricket into the tall grass. After a quick internet search, I had an answer: the spotted lanternfly. Destructive, invasive, and newly arrived in Philadelphia. The eggs were just hatching, and my fight had just begun.

In the age of global travel, biological invasions are happening everywhere. Everything from weeds to shellfish can hitch a ride on a boat or the heel of someone’s hiking boots. When an invasive species arrives, an eons-old story starts to play itself out: shock and disruption followed by a long process of grudging accommodation as the ecosystem adjusts to a new reality. As the apex predator in my backyard ecosystem, I would eventually share the same fate.

The spotted lanternfly is native to China. In 2014, it was detected in Pennsylvania where, freed from the pressure of its native predators, it was multiplying without restraint. The bug has since hopped and crawled its way to at least five other states, from New York to Virginia.

Lanternflies lay their eggs in patches of up to 50, cemented together by a grayish glue that hardens and sticks to sidewalks, shingles, tree bark, windshields — any surface that isn’t already covered with lanternfly eggs. When I put on my tall socks and Chacos and made my first foray into the strip of young trees behind my house, I wasn’t prepared for what I would find.

My sanctuary had been breached, and the invaders had left their mark everywhere they stepped. Trunk after trunk was plastered with eggs. The force of insect fecundity pressed on me with every step I took. I had visions of the branches bending under their weight, the grass and bushes crawling with little black hordes, a quiet summer ruined by the tickle of bug feet on the back of my neck. But I was ready to fight for my peace of mind.

I scraped eggs into a sandwich bag with an old credit card and drowned them in rubbing alcohol, but after a few runs, I grew impatient with the enormity of the task and started crushing the eggs on sight. I took a twig and steam-rolled it over the eggs, clustered like seeds on a strawberry, until the plaster cracked and the hatchlings burst.

I did all I could in that first encounter. But for every patch of eggs I crushed, a half dozen had already hatched. I was too late.

“The most annoying thing about this insect is the fact that it doesn’t fear humans,” says Heather Leach, a lanternfly expert at Penn State’s College of Agricultural Sciences. As an entomologist, she’s used to bugs, but I was less prepared for getting crawled on.

My front porch was no refuge. Before long, the chairs, railings and rafters were crawling with little black nymphs, the kind I had encountered that first morning. I found them clustered along porcelain berry vines in seething black ropes. I held my hands on either side — then, as quickly as I could, clapped down, sending a spray of nymphs leaping into the grass and onto my hair and clothes. My hands became sticky with hemolymph and nectar. The bugs excrete a sugary ooze called honeydew, which sits and molds on the places they leave behind. “I’ve seen situations where stop signs are completely blacked out,” says Leach.

My memories of that first month are colored by a gut level revulsion and the creeping feeling that the bugs were everywhere, always just out of sight. When I found one crawling on my bedroom wall, I flattened it into oblivion and shut my window for good. Leach says she’s heard of homeowners using blow torches, bleach and gasoline against lanternflies. “They’ll feed them to their pet frog. They’ll microwave them,” she says. It gets more than a little personal.

Farmers and nature lovers have a special stake in the fight. The insect is projected to cause millions of dollars in damage for the grape, apple and hops industries. Native, non-commercial plants are in danger, too. While spotted lanternflies probably won’t kill beloved trees like red and silver maple, they could make them more vulnerable to disease, says Leach.

So who will fight for the trees? The U.S. Department of Agriculture, the state of Pennsylvania, and Penn State University are among the groups working to figure out which control methods — including insecticides and deadly fungus — work best. Leach also recommends planting native plants to help the ecosystem weather the invasion.

Native predators could play a role, too, according to Anne Johnson, a PhD candidate at Penn State. She put out a call on social media for pictures of animals eating the bug, and she got back photos of chickens, cardinals and praying mantises trying a taste of the lanternfly.

But the bugs carry a defense against assailants — a bitter toxin. It isn’t enough to kill, but the taste might keep a critical mass of native predators from making a habit of eating lanternflies. Johnson’s main objective is figuring out how the bugs produce the toxin and where they are getting the raw materials to make it. She and other researchers suspect the sap of the tree of heaven — another invasive species from the same part of the world that arrived more than 200 years ago.

If the state can root out enough trees of heaven, the flies might lose their toxicity, and native predators might play a bigger role in keeping them under control, says Johnson. But it’s still too early to tell. The ecosystem is still in shock — figuring out what to do with the strange intruder.

Every afternoon, I drove the invaders back into the woods. But each new day, they came crawling back to the vines in the yard.

So as spring gave way to summer, I formed a desperate plan. From the farthest corner of the garage, I excavated a dusty, paint-stained Shop-Vac and two extension cords. I filled the basin with dish soap and hot water and fashioned a nymph-sized nozzle out of cardboard and duct tape. I ran the whole rig out the back door, through the yard, and into the little strip of trees.

On the neighbor’s fence, criss-crossed by porcelain berry and ivy, I found the lair of the lanternfly. Thousands of bugs gathered on the vines. Sucking, staring. Masses of black nymphs, dotted with bright red adolescents. I pinched the top of a vine and ran the nozzle along its length. The bugs — fearless to the end — disappeared one by one into the plastic hose. Thump-thump-thump, like the sound of a helicopter starting up.

A few times a week for the entire summer, when the afternoon sun brought the bugs out, I went into the trees with my lanternfly catcher and vacuumed them up by the hundred. And when the summer heat began to fade, I was finding only a dozen or so per trip. By the time the adolescents morphed into winged adults, they were so few that they hardly bothered me, and with a detached amusement, I watched them flutter past me on the front porch, wings blood-red against the sharp green of the lawn. Then they died too. As winter approached, I was convinced I had won and wouldn’t see them the following year.

But it was too good to be true. Like a chronic illness, most invasions can be managed but not cured. Only 2% of lanternfly eggs are laid low enough to reach, says Heather Leach, the entomologist. I have a good view of the backyard trees from my bedroom window, and when I took a closer look, I spotted rows and rows of eggs lining the upper branches.

When bugs invade a backyard, getting rid of them takes more effort than killing them on the spot. “You can remove them in your garden…but when there’s millions and millions within square miles, you’re not going to do any devastating effects to the population, unfortunately,” says Kevin Rice, an assistant professor of plant science at the University of Missouri. Rice is a veteran of the bug wars, having honorably served in the fight against the emerald ash borer and brown marmorated stink bug, among others.

The stink bug campaign has seen some success, says Rice, as farmers and scientists have learned more about the insect. In the beginning, for example, farmers were spraying pesticides multiple times per year before they figured out when the bug became active. Scientists even learned how to make its signature scent in the lab. The effort gained an unexpected ally when the U.S. was invaded by the samurai wasp, one of the stink bug’s predators in its native northeast Asia.

Other invasions haven’t gone so well. The emerald ash borer, which likely invaded Michigan in the 1990s, completely transformed the native ecosystem in some places into one dominated by invasive plants, says Rice.

How the Pennsylvania ecosystem will adapt to the spotted lanternfly isn’t clear yet, but humans are already adapting. The spotted lanternfly has inspired t-shirts, masks, and Halloween costumes. “It’s the bug that everybody loves to hate,” says Leach. This summer, the lanternfly nymphs will emerge in Pennsylvania alongside Brood X, the once-in-a-generation hatching of cicadas, and Leach extends her sympathies to people who will have to deal with both. “I think they’re going to be really sick of insects by the end of the year.”

As the eggs begin to hatch in the next few months, I’ll probably smash a handful of lanternflies. But I can admit when I’ve been beat. I’ll join my fellow Philadelphians for a summer outdoors, and I’ll leave the pest control to the professionals.

I’m with you. Ignoring them this year.

I’m in Philly too, and am amazed that I’ve only seen 1 or 2 nymphs so far.
Literally, on July 4th last year, I watched with horror as *streams* of them marched up the outside walls of my house and my neighbor’s house, and trained my preschooler to stomp them on sight.
This year, nada.