Yes — until it’s not. And these experts say that’s the problem 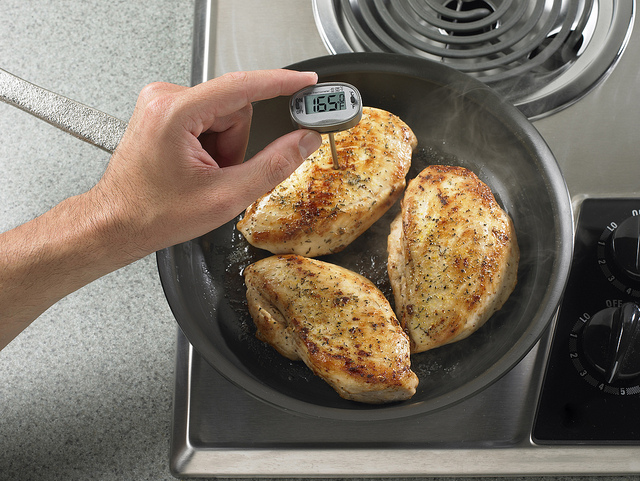 Using a meat thermometer to ensure your meal is fully cooked can prevent bacteria such as salmonella from making you sick. More than 1 million people get salmonella from contaminated chicken every year: 19,000 have to go to the hospital, and 380 die. [Image credit: Flickr user U.S. Department of Agriculture ]

On the cutting block

Taking a close look at a cantaloupe at the supermarket won’t reveal that it’s infected with Listeria monocytogenes, a bacterium so hardy that it can cross the placenta from mother to child and cause severe diseases or even death in infants.

Listeriosis, which killed about three dozen Americans in a 2011 outbreak traced to contaminated cantaloupe at a plant in Colorado, is just one of many foodborne illnesses that strike 48 million Americans every year and kill about 3,000, according to the U.S. Centers for Disease Control and Prevention.

Reducing the toll will require stepped-up inspections, tougher penalties for violators, better consumer education and stronger business incentives, food safety experts agreed at a Nov. 6 conference at the New York Academy of Sciences. Even drastically strengthened enforcement, they said, would cost far less than the $78 billion that foodborne illness costs the U.S. economy every year, according to a 2011 study in the Journal of Food Protection.

Ever since humans first started salting meat in 500 B.C., pathogens have outsmarted our efforts to preserve food safely. The most common foodborne enemies today are salmonella, mostly found on inadequately cooked chicken, and its bacterial cousin campylobacter, which can be found on about half of the chicken sold in grocery stores. Both bacteria cause diarrhea and stomach pains, but can be prevented by cooking meat properly. Yet outbreaks of the six worst pathogens have either increased or plateaued since 2006, according to the CDC’s Food Safety Progress Report.

“I’ve spent greater than 20 years in the profession, and these numbers aren’t coming down,” said Frank Yiannas, Vice President of Food, Safety and Health for Walmart, at the conference. “We can’t do food safety today the way we did it last year. If we do, we lose.”

What will bring these numbers down, according to Tanya Roberts of the Center for Foodborne Illness Research and Prevention, a consumer advocacy group, is stricter product testing in every step of food delivery. She said regulators in Sweden test chickens at the farm for pathogens before they can leave for slaughter — a step not required in the U.S.

“If you can’t get [your chickens] slaughtered unless you have no salmonella, then of course it gives you a huge incentive to clean up your act,” Roberts said.

Experts are particularly concerned about the illnesses that may crop up from emerging fad foods, such as fresh juices. The U.S. Food and Drug Administration requires companies to process juices to reduce the risk of contamination through pasteurization or cooling, but fresh juices such as apple cider sold at farmers’ markets are exempt from the rule. Now that these fresh juices are expanding beyond farmers’ markets, this regulatory loophole increases the risk of contamination.

Linda Harris, a foodborne illness expert at the University of California at Davis, said she anticipates a fresh juice outbreak in the next few years. “People don’t tend to … believe that there’s the risk and it’s hard to say that there is one until you have an outbreak to back you up,” she said.

It’s easy to fear many foods if you think for too long about contamination, and important to remember that the U.S. food system is largely safe. But when one of the steps from harvest to preparation goes awry, the consequences can be far graver than a bad case of diarrhea. In the infamous peanut butter recall of 2009, nine people died from salmonella and more than 700 got sick, according to the CDC. In September 2014, a federal jury convicted top officials from the Peanut Corporation of America, the company responsible for the outbreak, of conspiracy and fraud. It was one of the first times company executives were found guilty of violating the Federal Food, Drug, and Cosmetic Act. The conviction showed a stricter approach to food safety accountability from the U.S. Attorney’s office.

As the world becomes more globalized and the number of food suppliers decreases — raising the stakes for each individual outbreak to have more impact — experts warn the system needs more safeguards such as this.

Food safety requires enough concerns because diseases and bacteria could enter the body through varying food.