Why salmonella is so hard to beat 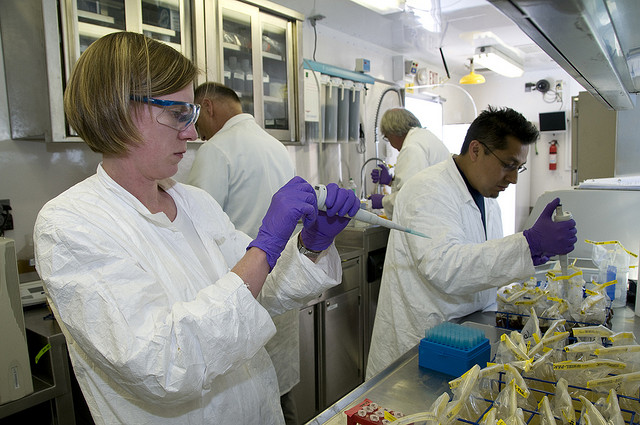 Government scientists in a mobile lab check for disease-causing bacteria like Salmonella in food entering the U.S. [Image credit: FDA.]

A kiss of death

Recently, the U.S. government updated an alarming announcement: An ongoing outbreak of salmonella poisoning in cucumbers has sickened more than 800 people, killing four, in 38 states. But if Americans knew how common infection with salmonella really is, they’d likely be even more concerned. Despite efforts to control the infection, 50,000 cases were reported last year in the U.S., and perhaps a million more went unreported, according to Centers for Disease Control and Prevention (CDC).

From E. coli at Chipotle branches to Listeria in ice cream, headlines about foodborne illnesses seem ubiquitous. With new food safety rules set to be finalized in the midst of these outbreaks, it seems a good time to ask: Why aren’t we making more progress against salmonella, America’s second-most common foodborne illness? (Only norovirus, a highly contagious virus that causes stomach pain and vomiting, infects more people.)

“Salmonella is stubborn, for lack of a better word,” answers Hannah Gould, an epidemiologist who has spent 10 years at the CDC’s Epidemic Intelligence Service, home of the so-called “disease detectives” who try to understand how outbreaks begin and spread. Salmonella enterica bacteria can infect people who eat a range of uncooked or undercooked foods, from eggs to poultry to produce, causing up to a week of diarrhea and other uncomfortable symptoms like cramps and fever.

The CDC’s task of controlling salmonellosis outbreaks is complicated by some big gaps in the agency’s records. The only way the CDC hears about a case is if the victim sees a doctor who takes a stool sample, which then has to be screened by a laboratory. The lab then has to pass the information along to state and local public health departments, which eventually report it to the CDC. At each step, cases fall through the cracks: The CDC estimates that for every case of salmonellosis it hears about, 38 more go unreported.

Only about three percent of salmonella poisonings occur as part of a larger outbreak as opposed to individual cases, but outbreaks offer valuable data because epidemiologists can trace similarities across cases. “For an individual person who gets sick, very rarely do we know exactly what caused it,” Gould said, whereas multiple infections allow investigators to triangulate a particular food or location.

The picture is changing somewhat, now that new regulations are taking effect over the next six months to implement the Food Safety Modernization Act, passed by Congress in 2011. The rules, the most sweeping since 1938, put more responsibility on food producers of all types, including processors and importers as well as growers, to be proactive in finding and stopping contamination.

For example, the cucumbers responsible for the current outbreak were from Mexico. The new regulations as currently written will require importers to monitor for foreseeable issues — including bacteria that could survive the packaging process — in the food itself as well as its transportation and storage.

“We who support the law believe it’s the best approach to try to reduce what are to a large degree preventable illnesses,” said Sandra Eskin, a lawyer who leads the Pew Charitable Trust’s work on food safety.

The new regulations have generally been welcomed by the food industry as well as by consumer groups. “They understood it was good for business and good for consumers,” said Eskin, “but it’s going to be a challenge to implement. Again, the FDA has never done this before.” The Food and Drug Administration has requested more than $100 million to support implementation of the new rules, including re-training inspectors, developing technology and hiring experts. Congress will decide whether to allocate this money as part of the December 11 budget deadline.

Even if Congress agrees to the FDA’s funding request, no one expects salmonellosis to disappear anytime soon. The average American eats almost a ton of food each year, which gives bacteria a huge number of opportunities to sneak around even the strictest precautions. The two most important prevention measures for kitchens are to thoroughly cook meat and eggs and to properly chill food.

“Just because something’s regulated doesn’t mean it reduces outbreaks,” said Keith Schneider, a food scientist at the University of Florida who works on safety issues. “You can produce the cleanest product out in the field, but if it’s abused in processing or in the home, you’ll still have an outbreak.”