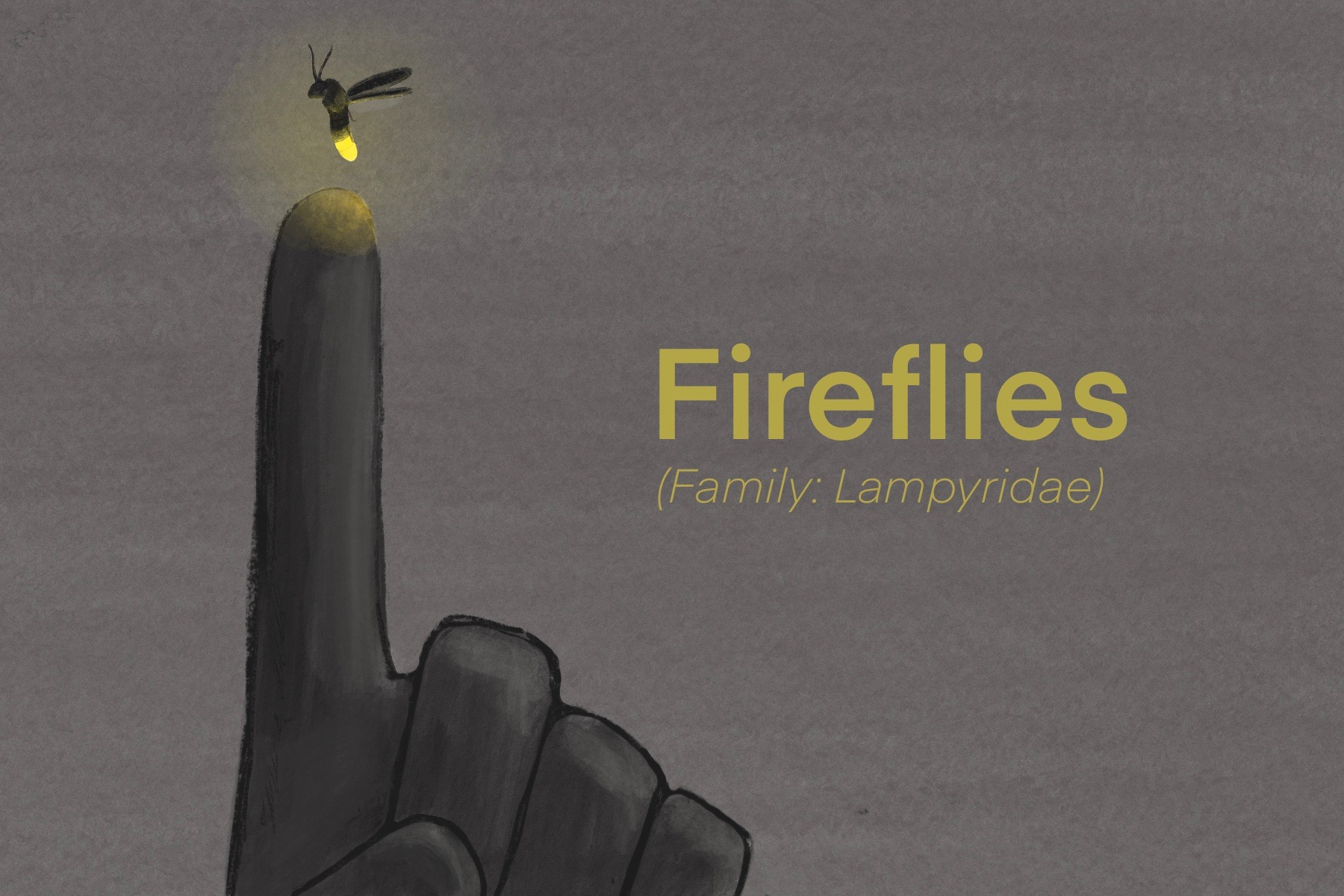 Touch a firefly and their illuminated backside will be cold. Unlike the hot light produced from a lightbulb, the firefly's light-producing chemical reaction prevents them from overheating. [MK Manoylov | CC BY-NC-ND 2.0]

Repeat: fireflies are not flies. You’ve been duped your whole life!

Fireflies are in the order Coleoptera, which is reserved for beetles. And fireflies certainly have the characteristic of beetles — even if their butts do glow.

The biggest beetle characteristic is that the wings tuck underneath structures called elytra. Elytra protects the beetle’s delicate wings and abdomen from damage.

You might have noticed ladybugs (another type of beetle) look like their red/orange back side splits apart before they take flight. The same deal happens with fireflies and other beetles — the elytra needs to lift, revealing their wings and allowing them to fly.

The following video depicts elytra lifting and revealing wings on ladybugs pretty well. I couldn’t find another video showing the same detail for fireflies, but you get the point.

Houseflies, dragonflies, butterflies, moths, and other winged insects don’t have elytra, so they’re in categories separate from beetles.

So, in all, everything you know is a lie and fireflies are actually beetles.

How do fireflies glow?

Like certain jellyfish, algae, and fish, fireflies are bioluminescent — meaning they create light within themselves.

Fireflies use oxygen, a chemical called luciferin, the enzyme luciferase, and energy from food to produce a light-forming chemical reaction. Fireflies control the amount of light they produce by regulating how much oxygen enters this chemical reaction.

But this chemical reaction isn’t the same as a lightbulb, which gets hot if you keep it on for too long. The firefly’s chemical reaction doesn’t produce heat, which allows them to continue flashing without burning themselves out.

And just light how flashlights are only effective in the dark, so too do fireflies only appear at night. Otherwise that super cool chemical reaction would lose its utility.

Okay, so then why do fireflies glow?

Why do Luna moths only live for a week? Why do Hercules beetles have such large horns? Really, why do adult insects do anything? They have eggs to lay, and so adult bugs gotta get laid to do it.

Fireflies flash light at other fireflies to find a mate. Since there are over 2,000 firefly species, individual species have a unique mating pattern so that members of the same species can find each other. Females create a pattern and males come a-flockin’.

The fireflies may look pretty at night, but some of them could be lured and eaten before your eyes. That definitely throws a wrench in the romantic aesthetic of Lampyridae. But hey, it’s a beetle-eat-beetle world out here.

Dear Scienceline and M.K. Manoylov,
I am desperately looking for information on fireflies of the southwestern United States. Do you have any suggestions? These wonderful beetles are fast losing ground along with their fellow Arthropods, bees, and butterflies. I am in Great Old Broads for Wilderness and my local project is all about bringing back invertebrate pollinators. Any help will be greatly appreciated. Thanks! Laura