Does an organic label mean anything?

Dissatisfied with the United States’ wasteful and planet-degrading food system, San Franciscan food activists Jessica Prentice and Sage Van Wing came up with an idea in 2005. They challenged everyone they knew to eat nothing but locally grown food for a month.

It wasn’t an easy challenge, says Prentice, but by 2007 their idea had gained so much traction that it required its own word. “It was that challenge that birthed the word ‘locavore,’” recalls Prentice, a chef and author. That same year, ‘locavore” became the New Oxford American Dictionary’s “word of the year.”

Ever since, “eat local” has become a widely-accepted mantra for people seeking to reduce their carbon footprint. It’s even recommended by large institutional bodies, including the United Nations.

It may also be the wrong message. A recent set of analyses led by Hannah Ritchie, a data scientist from Oxford University, concludes that eating local can be misguided advice. “Many have the misconception that eating locally-produced food is one of the most effective ways to cut their carbon footprint,” writes Ritchie in an email. “But most of us underestimate the emissions involved in the production stage of food.”

With food production accounting for about a quarter of global greenhouse gas emissions, knowing which products and food systems are most environmentally friendly is key, explains Ritchie.

Her analyses are based on the most comprehensive meta-analysis of global food production to date, collecting data from 38,700 commercially viable farms in 119 countries. Her central finding is that, on average, transportation of food accounts for less than 10% of carbon emissions in the global food supply. It’s dwarfed by emissions related to changes in land use, such as deforestation, as well as farm-related emissions, notably the release of methane from cow farts and burps. 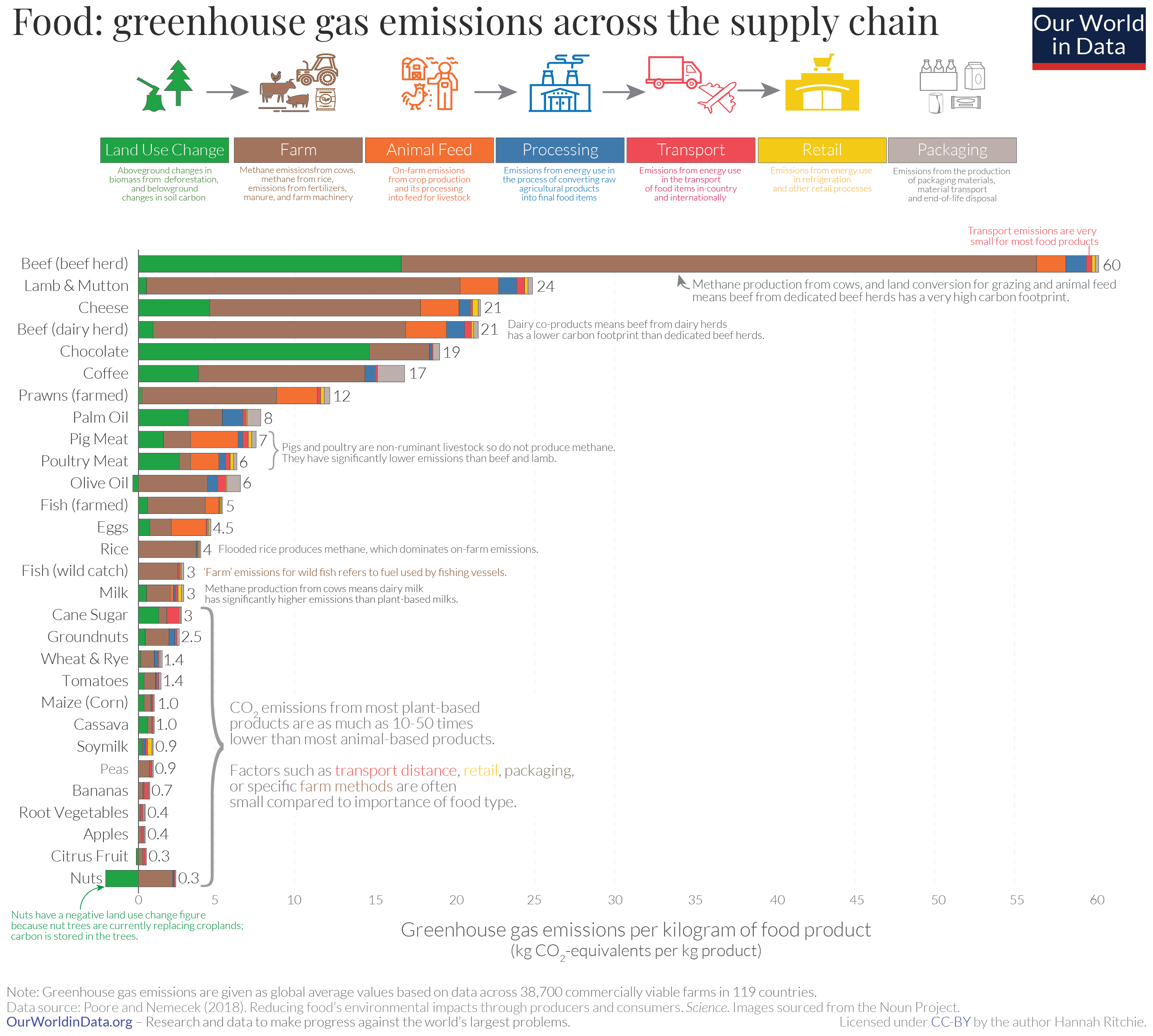 Most emissions come from land use change and farming practice. Source: Our World in Data

It’s what you eat, not where it comes from, that really has an impact, Ritchie says. In her analyses she illustrates greenhouse gas emissions broken down by 29 food types — ranging from meat and dairy to nuts and vegetables. Consistent with previous findings, red meats — particularly beef — emitted the most greenhouse gases, whereas plant-based foods emitted the least. “We need to eat a lot less meat, and the meat we do eat needs to be the lowest-footprint it can be,” Ritchie concludes.

Her message is getting support from other experts. “The blanket advice to eat local is misguided,” says Henning Steinfeld, an agricultural economist at the Food and Agriculture Organization of the United Nations who was not involved in the Oxford analyses. “It needs to be qualified.” As a real-world example, Steinfeld explains how countries such as Saudi Arabia, which rely on importing fruits due to land and water shortages, would almost certainly incur a higher environmental footprint if they were to switch to producing these domestically.

But while experts criticize eating local as being largely ineffective in reducing one’s carbon footprint, the locavore movement is still going strong, says Prentice, its co-founder. Restaurants, supermarkets, and food markets all still emphasize the fact that they use local produce, she adds. A 2018 Gallup poll confirms this, showing that nearly 75% of Americans say they actively try to include locally produced food into their diets.

A major step that could help consumers eat more sustainably, says Ritchie, would be to encourage producers to put labels on air-freighted foods. She adds that placing clear, colour-coded labels on food to illustrate their carbon footprint could help consumers make more sustainable food choices. A team at Oxford University is currently developing the food analytics to help achieve this goal in the near future. 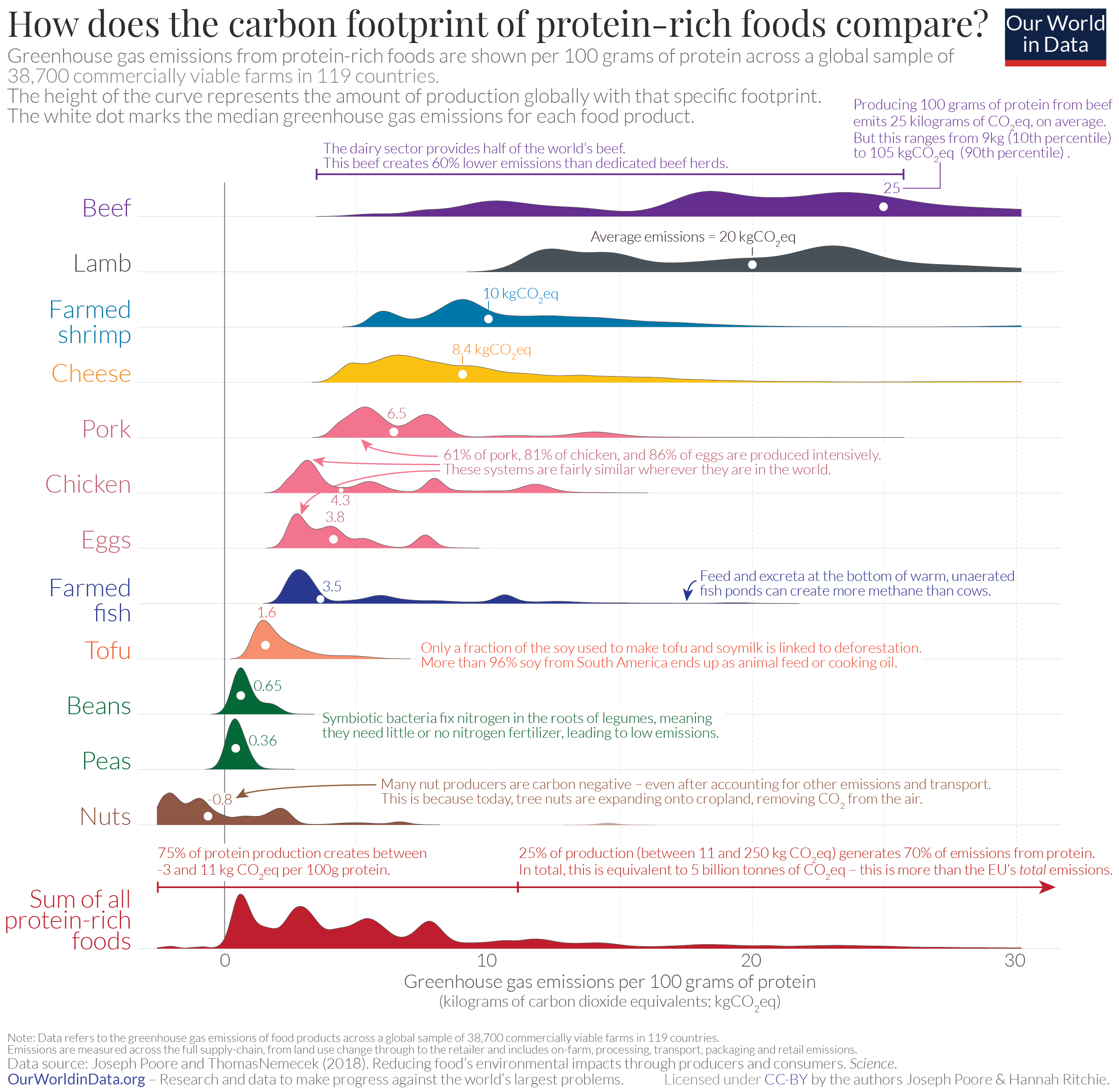 Animal products emit significantly more carbon emissions than plant-based foods, regardless of how they are produced. Source: Our World in Data.

Prentice, however, says she’s unimpressed by these findings. She says that by focusing only on climate-warming emissions, Ritchie and others are failing to account for other benefits of eating local — especially supporting small-scale farms that create a sense of community.

Still, Prentice acknowledges that obsessing over how many miles food has traveled — a unit known as “food miles”  — without considering the farming practices employed to produce them is a mistake, even for the most dedicated locavore. “Food miles is a piece of the picture but, to me, it’s far from the most important part of what the local eating movement is about.”

People eat locally for different reasons, says Brent Sohngen, an environmental economist at Ohio State University who was not involved in the analyses. While eating local does not guarantee a low carbon footprint, locavores can help strengthen communities and support local industries, he says. But if the sole purpose of the movement is to help the planet, eating local is misleading advice, he adds.

With demand for meat growing, especially in the developing world, it’s especially important for the public to understand that what you eat is more important than where it’s grown, says Ritchie. “We’re at a crucial point in shifting attitudes towards diets and environmental impact.” With plant-based and lower carbon-intensive diets becoming increasingly common in the Western world, Ritchie is “cautiously optimistic” that the message is starting to get out. “The signs are positive that people are interested in understanding how they can have a positive difference.”

Jonathan Moens is a New York based science journalist with a background in neuroscience and philosophy.